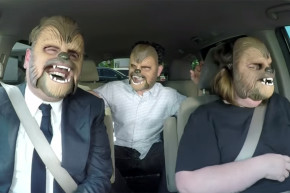 People Love Late Night TV… On YouTube… The Next Day

If you’re ever curious what the hottest video is on YouTube at any given moment, there’s a site, mostpopularvideointheworld.com that uses YouTube’s API to pull the hottest video, giving people an easy way to tap into the internet zeitgeist at any time.

The creator of the site shared his findings on Medium and says that in general, clips from late night TV and talk shows go viral the most. That includes clips from “SNL,” “The Tonight Show Starring Jimmy Fallon,” and “Ellen,” along with the random success of “The Late Late Show With James Corden.” Though the most popular video can change moment to moment, James Corden’s recurring carpool karaoke spot frequently tops the list, and his video with the Chewbacca Mom was the most popular YouTube video for the entire month of May. People are also nuts of John Oliver’s unique brand of late night TV, which put HBO in the number three spot. His clips were number one for every Monday in May.

But while the corporate world has taken over web video, indie creators still get some love too, accounting for 41 percent of the most viral YouTube vids. Internet weirdo Casey Neistat and a YouTube talkshow called Good Mythical Morning, are among the most popular independent creators who pop up on the site. And for some reason, people love Epic Rap Battles of History, the YouTube videos that pit historical figures like Frederick Douglass and Thomas Jefferson against each other for, you guessed it, rap battles.

These findings are also an interesting look at the evolution of what people watch on the internet. These days, shows like Fallon feel like they are intentionally created with YouTube in mind. (When was the last time you sat down and watched a whole episode of Jimmy Fallon?) For some reason, that’s the kind of silly stuff resonates with people in a broad sense.