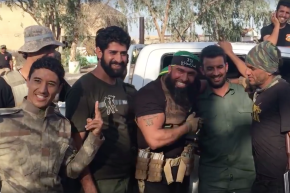 Iraq’s ISIS-Slaying “Angel Of Death” Resurfaces Outside Of Fallujah 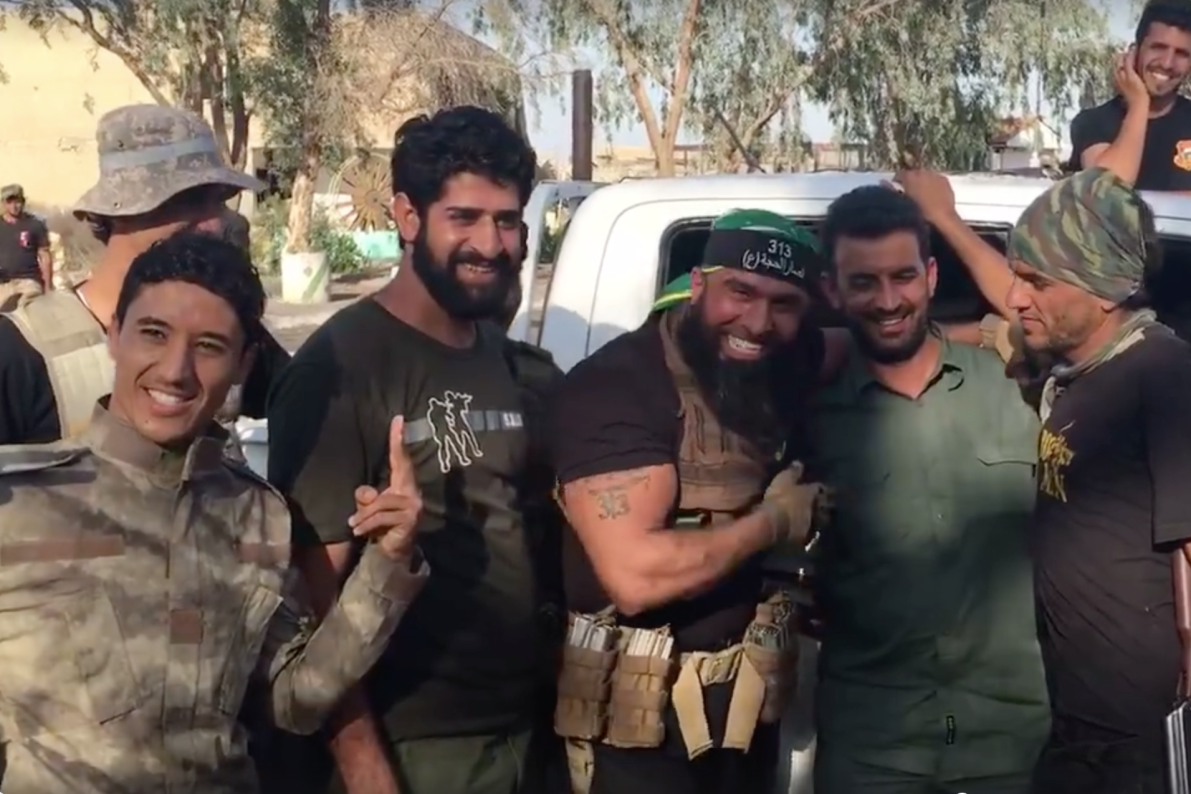 Abu Azrael, Iraq’s axe-wielding internet folk hero, has resurfaced near the front lines of the country’s raging battle between government forces and the Islamic State. Multiple videos discovered by Vocativ reveal the imposing “Angel of Death” hunkered down on the outskirts of Fallujah, the western Iraqi city ISIS militants have controlled since 2014. Late last month, the Iraqi army, aided by a mishmash of heavily armed Shiite militias, launched an offensive to liberate the predominately Sunni city, stoking fears of a sectarian bloodbath.

Abu Azrael, Iraq's ISIS-baiting "Angel of Death," (center) appears in a recent video outside of Fallujah.

Fallujah “is a city of dead people,” declared Abu Azrael in a video published Friday from just outside the town. Grinning ear-to-ear, the beefy commander, who is purported to head the Imam Ali Brigade, an Iranian proxy group, continued to taunt his jihadist rivals. “You are besieged like dogs. You will have to kill and cook mice in order to stay alive.”

On Monday, Abu Azrael appeared in another video flanked by a dozen men. Staring directly into the camera, he vowed they would “pulverize” the militants, using one of his signature catchphrases.

For the time being, however, the bearded bodybuilder and his Shiite comrades are forbidden by the Iraqi government from entering the city out of fear that they may attempt to exact revenge on Sunni civilians, who some militia view as overly sympathetic to ISIS. Abu Azrael appeared resigned to respecting the mandate, at least for the time being.

More The Future Of Fallujah: If Recaptured From ISIS, Will Anything Change?

“Fallujah is just a drop in the ocean in comparison to the areas outside, which are under the control of the Hashd Shaabi,” he says in a different video, referring to the Shiite militias, commonly known as the Popular Mobilization Forces. “All the Shiite resistance groups are taking part in the operation. We are waiting for orders but can’t enter Fallujah. They are afraid that the Hashd Shaabi will enter Fallujah.”

Using a signature catchphrase, Abu Azrael vows to "pulverize" ISIS militants who remain in the Iraqi city of Fallujah, about 40 miles west of Baghdad.

A symbol of Iraqi Shiite resistance against ISIS, the so-called “Angel of Death” became a cult figure in Iraq after a joint military assault by Iraqi forces and Iranian-backed militias against the Islamic State last year. On occasion, he’s also turned his tough talk toward Saudi Arabia, which has waged a war against Shiite rebels in Yemen.

Iraqi social media users quickly created tribute Facebook pages to him and began circulating images of Abu Azrael holding axes, waving swords, and abusing the corpses of ISIS fighters. There are also music videos and cartoons celebrating him, and he has regularly appeared in television interviews with giddy anchors and smiling politicians.

Some have speculated that Abu Azrael is the creation of Iranian propaganda.