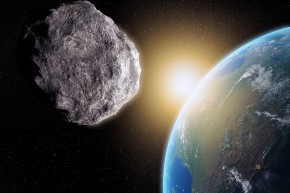 Watch A Massive Fireball Light Up The Arizona Sky

You might think fireballs like this are rare, but NASA has been recording hundreds of them over the last 20 years.

The cameras, aptly named the “All Sky Fireball Network,” record in black and white to allow for a better view of the night sky overhead. Often, multiple cameras will get a view of a meteorite’s descent, which allows NASA to calculate the height and speed of the space object. All of this data gives scientists clues as to where these brilliant fireballs come from. The government plans on expanding the All Sky Fireball Network for future asteroid sightings, which means more footage like this.

As for the people who lived in the grand piano-sized asteroid’s path? They’re fine. The asteroid burned up in the Earth’s atmosphere before safely scattering to the ground north of Tucson.