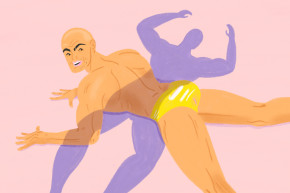 In hidden corners of the internet, pro wrestlers make a living by embracing the one thing pro wrestling has always been afraid of 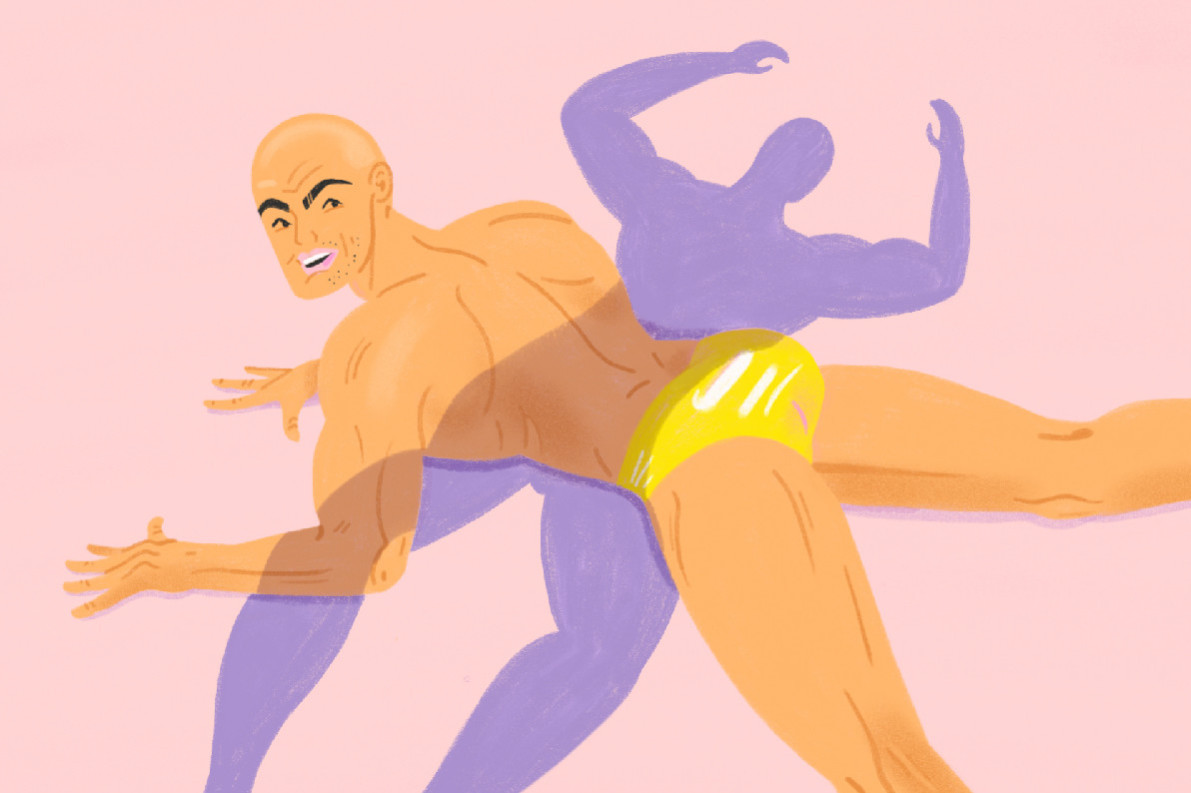 “So whether it’s for BG East or it’s for World Wrestling Entertainment, it’s going to happen.”

For the uninitiated, BG East Wrestling is an online marketplace for DVDs, streaming video-on-demand, and downloadable clips of wrestling matches that are intended to titillate and arouse the viewer. There’s a membership option available called The Arena, which grants discounts and otherwise unavailable access to “1000 Pay-per-view Video-on-Demand matches, including EXCLUSIVE match content and HOLDS clips, with 5 added each week.”

And while the visuals are framed in such a manner that clearly pegs them as soft-core pornography—with a heavy filmic emphasis on the participants’ groins and buttocks—for the most part, they do not contain explicit nudity or sexual acts. As BG East’s History and Principles page blares, the eroticism to be found here is in the sport: “These and our many hot new series are based, first and foremost, on a love of WRESTLING!”

BG East was founded in 1979 by Bill George as “BG Wrestling,” a hand-printed black-and-white zine of wrestling fan-fiction submitted by both amateurs and quasi-professional writers in exchange for a nominal fee. It began to evolve when George met Stephen Driscoll, a photographer who suggested adding images to punch up the literature. Video production started shortly thereafter, but after 10 years, Driscoll struck out on his own, operating the catalogue as a “one-man show,” he said via email, before landing online in the 1990s. Driscoll also wrestled for the site, under the name “Kid Leopard.”

Though Driscoll no longer manages the outfit’s day-to-day operations, he said that over the last two decades it’s grown exponentially, such that BG East currently boasts “over 100 active wrestlers on our roster” filming at studios in Boston and Fort Lauderdale, and shooting multiple matches over the course of a day or week.

“We bring in wrestlers from all over,” Driscoll wrote. “House them, feed them, entertain them. We consider ourselves a sort of fraternity.”

Dolph Danner hails from Staten Island and has been working professionally for the past nine years, mainly with an independent outfit. (To clarify: Danner goes by a different name when wrestling outside of BG East. He requested that he not be identified by that name in this article.) He’s wrestled all over the United States, and his dream, he said, is to eventually make it to the bright lights and jam-packed arenas of the WWE. Even though he’s sure that he’s ready skill- and persona-wise, it’s impossible to measure how close he is to grasping the brass ring.

“It’s kind of one of those right place, right time, who you know situations,” he said. “So, I could be a day away or I could be a year away. Who knows?”

But despite his growing popularity and ascendant brand, Danner still only earns about $100 dollars each time he enters the squared circle. Hence, for Danner and other up-and-coming wrestlers, the appeal of appearing in a BG East film is fairly obvious. Danner can crank out anywhere between three to five 10-plus minute contests against a variety of opponents in the course of a shooting day, and receive a cool $250 or more per match, thus affording him the opportunity to lop a few hours off of his day job as a personal trainer.

Danner praised BG East’s professionalism, stressing that all they’ve asked from him is to put forth the best match he possibly could, never demanding that he do anything that in any way made him feel uncomfortable or crossed a boundary. He has shot about “15 to 20” matches both with BG East and a few other lesser-known but similarly-themed sites over the last year and a half, and he’s begun to attract a serious following.

Given the wondrous interconnectivity that the internet provides and the need for an indie wrestler to engage in a robust self-marketing campaign, Danner’s encountered quite a few fans on social media who have plunked down offers of cash in exchange for used gear. Everything is up for sale: socks, trunks, jockstraps—as long as it’s touched an oiled, sweaty body, it can and will be sold. Danner said that he’s constantly fielding requests for his private garments, but the one that stuck out the most was lobbed at a friend of his.

Though he hasn’t sold his skivvies, Danner’s open to the idea. “If the price is right? Sure,” he said. Online, the reviews of Danner’s wrestling can get downright purple in prose. “Thankfully, so far, I’ve only gotten good reviews,” he said, chuckling. “And they’re… oof, man, they’re really good.”

Danner provided a link to one blog in which a fan of his wrote, “Could I possibly overstate how hot I find the divine Dolph Danner in his offbeat pulchritude and lascivious curves? Or my joy in watching his and Guido’s savage pas de deux? Or how many dicks I would suck to see Danner in the ring against Joe Robbins or Exavier or Lane Hartley, which cannot happen soon enough? Or how lavish a shrine I would build for the guy’s aqua-metallic trunks were they ever to fall into my possession?”

It should come as little surprise, then, given the obvious economic incentives, that other fledgling wrestlers have followed Danner’s path. A current high-profile pro wrestler worked with BG East and another with one of its competitors, CyberFights.com. Those videos have largely been scrubbed from the internet, but a few stock photos and clips remain floating around in the constant churn that is the web.

CyberFights.com did not respond to emails, but Driscoll said that the notable wrestler that worked for him requested that all of his matches be removed from BG East a few years ago, though Driscoll couldn’t recall exactly when or whether the request was made before said star advanced in his career. He complied, partly because he admired his talent and considered him both a “friend” and “a smart, friendly, professional, and personable colleague,” and partly to protect him against any backlash from the still-present bigotry in the pro wrestling world.

“We did not want his well-deserved advancing career to be stunted or adversely impacted by the homophobia latent in almost all of the major professional wrestling promotions,” Driscoll said. “These big promotions want to pretend that a major part of their demographic is not gay men.”

One such fan is Glenn Scott. Born in Upstate New York, he got hooked as a kid in the late 1970s when the local Fox station began showing wrestling matches every Sunday night at 7 p.m. “It kind of just fascinated me, as a kid,” he said, “Because it was kinda like… I knew it was like a… I’ll put it in quotes, ‘a bad thing,’”

Later in life, wrestling played a profound role in his sexual awakening. After college, he was living in Richmond, Virginia when he started responding to ads placed in the local free weekly paper from men wanting to wrestle. From there, he joined underground wrestling clubs in the area in which groups of 10-15 guys met to mat wrestle, practice submission holds, and try out pro-style moves twice a week. “We’d just roll around for three hours and it was great,” he said.

He was already a fan of BG East, ordering VHS tapes from their printed catalogue, when, in 2002, a friend invited him to travel up to Boston. Though he was content to just watch, “The guy who owns it, he was just, like, ‘Oh, do you want to do a match?’” Scott said. “And I was like, ‘Yeah.’ I jumped right out there and I got three matches that weekend.”

Asked what drew him to BG East, he aligned himself with their mission statement. “Some guys, you know, they just want to see beautiful guys,” he said. “A real wrestling fan, I guess, like myself, it’s, like, the wrestling has to be good. That’s what’s exciting about it to see.”

Scott was associated with BG East for about a year, performing in matches and helping others perfect certain moves. He even got to meet then-Massachusetts Representative Barney Frank. “He’s, like, a friend of the guy who owns BG East,” Scott said.

Reached by phone, Frank confirmed that yes, he’d met Driscoll through Democratic party political events and the advocacy group, National Stonewall Democrats. “I went to one or two of his tournaments where you do the filming,” Frank said. “And the ones I saw, everybody was clothed.”

Scott’s wrestling activities have waned as he’s reached his late 40s and he misses it terribly, checking out both indie and WWE matches hasn’t been able to fill the void. “It’s fun to watch, but if I don’t get to wrestle it’s a bummer,” he said.

But the camaraderie and brotherhood wrestling provided, whether or not the wrestling culminated in sexual activity, changed his life. “I wouldn’t have the confidence I have. I probably wouldn’t be doing this interview, you know?” he said. “These kind of things have totally given me, like, so much humility and just the drive. I have a… I call it a wrestler’s ego. I can get my butt kicked or I can kick butt, but as long as I’m kicking or as long as someone’s kicking it’s given me the drive to do all kinds of stuff.”

And that has made all the difference.

“I just remember thinking I was all alone in the world,” he said, “And then I was part of this worldwide network. And now I have friends all over the world. And I’ve never felt more confident to be part of something. I know it sounds corny.”