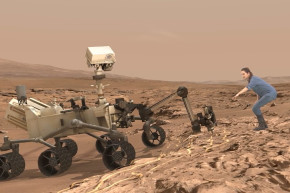 Vacation To Mars This Summer
By Jeff Donlan

Vacation To Mars This Summer

Forget about your trip this summer to the Bahamas. You’re going to Mars!

NASA has partnered up with Microsoft to bring us Earthlings to the Red Planet via VR headset. Using Microsoft’s HoloLens and images taken by the Curiosity rover, users can get the thrill of exploring Mars that mankind has yet to experience.

Images from the rover have been combined to build a consistent 3D model of the planet.

Researchers at NASA use this mixed-reality technology, allowing them to walk around and explore Mars right from their office. This has created an experience that mimics real life field research.

A nice red cherry on this red planet treat: the public’s guide on virtual tours of the Red Planet will be astronaut Buzz Aldrin himself. Apparently the moon wasn’t flashy enough for him anymore.