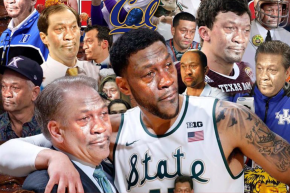 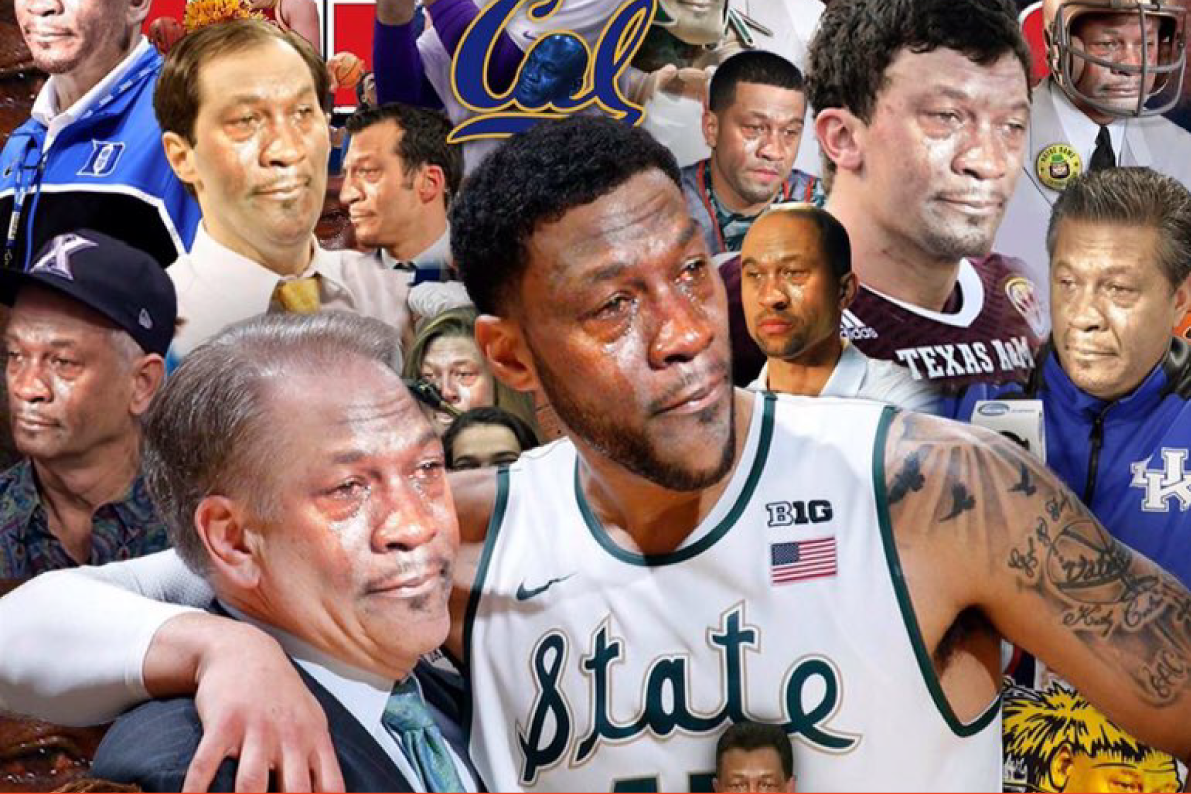 We can sit down and have a nice long debate about the evolving artistic merit and communal language of memes. It’s a conversation worth having, even if those standing in staunch opposition do scan as angry and inchoate grumps, unable or unwilling to embrace all that is good and pure. What’s not up for debate is that the greatest creator of Crying Jordan memes is a 20-something artist tucked away in relative obscurity, crafting visual gems while simultaneously earning a living as an employee of R&S Maintenance Services in Meridian, Kansas, servicing metal fabricating and repair devices. His name is Bryce Wood and he is an artistic genius.

Proof? When the Denver Broncos finished battering Tom Brady’s limp body all over the field in the AFC Championship game, basketball historian Curtis Harris suggested that “Crying Jordan and Courtroom Brady could form a potent duo.”  A mere 27 minutes later, Wood had deftly blended the two iconic struggle faces together to create this jarring, re-jiggered sketch.

As is its wont, it was hurriedly shuttled throughout Twitter, boosted by an inclusion in a quick SB Nation write-up of that evening’s wholly predictable swarm of Crying Jordans. A second wave of viral popularity hit in April following the announcement that Brady’s four game suspension had been reinstated, aided in part by an act of quasi-theft by the blandly unfunny joke/meme clearinghouse account @NFL_Memes, which boasts upwards of 357,000 followers. Were it not for Wood’s Twitter handle etched into the background, his work of art could easily have been treated as public property.

What separates Wood’s work from the relatively slapdash cut and paste jobs that comprise the bulk of Crying Jordans is the degree of artistry involved. Take a look at his rendering of the 20 dollar bill: the subtle shading from the crosshatching on the original image to the almost watercolor-like brushstrokes of the final product, such that it’s almost impossible to tell where the genocidal seventh U.S. president ends and the greatest player in NBA history begins.

When Drake’s new album, “Views from the 6,” dropped, Wood was so inspired he not only plastered a Crying Jordan on him, he also Uncle Denzel’d LeBron James, perching a pouting, miniature Drake on his shoulder.

One of the hardest holes in the world! Now we know why. #ThePlayersChampionship #TPC #TPC pic.twitter.com/zMjSdQq7YA

To be clear, there isn’t a one-to-one relationship between artistry and the potential for humor and/or insight, but mastering the form requires a degree of craft that your average photoshopper doesn’t possess. That is what separates Bryce Wood from his peers.

A former college baseball player who graduated with a fine arts degree from Washburn University, Wood grew up in and still resides in Topeka, Kansas. He’s a lifelong, diehard Kansas City Royals and Kansas City Chiefs fan, and while he isn’t currently earning a living as an artist, he’s putting together a website that will act as an online portfolio and hopes that he’ll be able to land a digital gig in sports that would allow him to employ his artistic skills. “My dream is to one day work as a graphic designer where I can combine both passions,” he wrote via email

He was drawn to Crying Jordan the same way most people were—by dint of its ever-mounting presence over the last year, but Wood wasn’t satisfied with the aesthetic standards that had been set.

“I noticed a lot of people using the image would simply cut it out and paste it on another face without taking time to make it blend,” he wrote. “I kept thinking to myself that I could easily use my Photoshop skills and create memes that had more of an artistic touch.”

Even though his Crying Jordans haven’t netted a thin dime, he does take pleasure out of the endorphin rush when one of his images goes viral. “It’s a very cool feeling knowing people are enjoying my work and taking the time to retweet or comment,” he wrote, but the work remains its own reward. “I still enjoy creating them for my own satisfaction. I am always trying to one up my last creation. If it goes viral, that’s just a plus.”

He preps ahead of time if there’s a major sporting event on the docket, creating two memes for each of the teams involved, and hip pocketing the unused one for a later date. But if the unexpected occurs, a crushing defeat or truly epic failure, he’s got to be ready to pivot at a moment’s notice.

In terms of his technique, “for blending the Crying Jordans, I worry about two things: matching the skin tone and blending the face so it’s seamless. For the skin tone I use color balance tools and saturation tools, as well as altering the brightness. For blending I mainly use the eraser tool using a soft edge brush so that it fades it into the original photo,” he wrote via Twitter direct message.

Though he is able to generate a Crying Jordan fairly rapidly, much of his focus is spent refining the portrait until he’s content “with the realness of it,” he wrote. Partially, that’s a question matching the skin tone and modeling the edges until he achieves a sculptural continuity as well as playing with the texture filters so Jordan’s weepy mug lines up focus-wise with whomever he’s grafting it on to. Still, he allows himself the artistic freedom to “keep some of the person’s facial features intact. Whether it’s the nose, eyebrows, chin, etc. so that you can still tell who it is”

You can see this at play in this image of Russell Westbrook. The important Crying Jordan-y elements are still there, but the amalgam allows Westbrook to retain his essential Westbrook-ness. It’s neither Crying Mike nor Russell, but a composite that elevates it to something more.

Russell knows how to look good… Even while losing! pic.twitter.com/bioHeBqMbm

And the Westbrook Jordan is an entirely different Jordan than this nightmarish Michelle Beadle portrait.

All in all, when it comes to the question of “realness,” Wood said, “It’s kind of hard to explain,” before settling on an answer that allows us to talk about his work in terms of draughtsmanship and painterliness: he’s creating a trompe l’oeil.

“I define that as looking like it’s not photoshopped.”