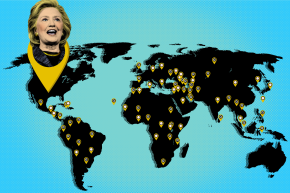 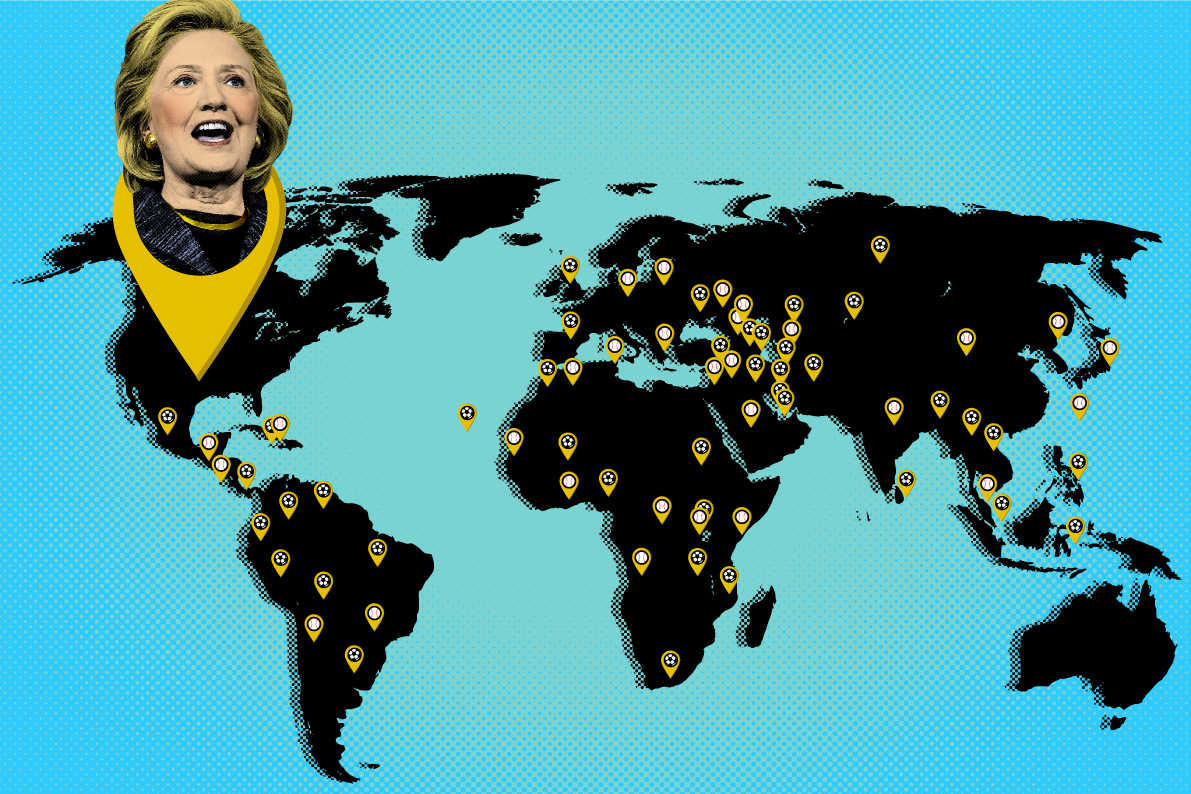 The world’s most universal icon may well be the black-and-white checkered, pentagon-patched soccer ball. “Soccer in general is, I think, the international language,” longtime University of Washington women’s soccer coach Lesle Gallimore said. “There’s nary a corner of the world you can go to where soccer isn’t something that shrinks the world.”

That’s something current Democratic presidential candidate Hillary Clinton is fully aware of, even though it’s not a part of her legacy that you’ll hear anyone talk about. Unless, of course, you ask the people who were part of Clinton’s push to use sports as a diplomacy tool during her time as Secretary of State.

Former U.S. national team player Angela Hucles has seen the power of sports diplomacy in places as far-flung as Morocco, Namibia, Israel, or the Ukraine.

“Even as a woman going into countries that don’t necessarily accept other females and believe that females can play sports, I can just start juggling a soccer ball, and all of a sudden a bunch of kids will come out,” Hucles, now the president of the Women’s Sports Foundation, said.

Gallimore, a U.S. Soccer-accredited educator, and another former national team player, Marian Dougherty (née Dalmy), joined Hucles on the 2012 trip to Rabat, Morocco’s capital, where they ran clinics for 32 women (mostly hailing from Morocco, but a few came from Tunisia and Libya) looking to become soccer coaches. They spent mornings in a classroom for instruction and video and the afternoons on the field with youth players. “It was the first time that any African country allowed women to get credentialed and certified as soccer coaches,” Hucles said.

That one-time visit has become a lifelong link, thanks to an active Facebook group. “I’ve stayed connected in four years with a handful, for sure,” Gallimore, who this May visited Ethiopia to run similar clinics, said. “They reach out to me, post things in there, and ask questions.”

The sponsor for this trip—and 103 like it—in just the last five years is neither a pro sports league nor nonprofit. Instead, it’s the U.S. State Department, which has been sponsoring envoys and visitors through its SportsUnited umbrella since 2005. The nascent program expanded rapidly under former Secretary of State Hillary Clinton, a forgotten footnote to her tenure in President Obama’s Cabinet. There were 64 trips to other countries while she was Secretary, compared to only 24 under her predecessor, Condoleezza Rice. Perhaps it’s time to start thinking of Secretary Clinton as a sports ambassador.

Sports are a communicant with powerful connectivity, and these programs are part of what Clinton called “smart power diplomacy”—utilizing all resources to facilitate commonality among people who otherwise may not have met. A key push was to empower women and girls.

“We at the State Department believe in the power of sports to bring people together across barriers of all kinds: national barriers, language, cultural, racial barriers, and increasingly across the divide of gender,” Clinton said in a 2012 speech. “. . . Sports can make you stronger, tougher, more confident, more resilient, and those qualities can stay with you long after you finish the race or the final buzzer sounds. Now I know this from my own life. I was never a great athlete, but I loved sports. And I played softball, I played soccer, I played tennis, I did whatever I could mostly with my brothers and the boys in the neighborhood.”

The U.S. State Department enlists star players for service and sends them to other countries as emissaries not just of sports but of the export of America.

“In terms of diplomacy, sports is a way of building goodwill between peoples that a diplomatic démarche cannot do,” said Georgetown’s director of Asian studies, Victor Cha, who wrote the 2009 book, “Beyond the Final Score: The Politics of Sport in Asia.” “Its scope is much broader than the narrow policy circles that governments run in.”

Cha, a former White House National Security Council advisor, added that sports exchanges don’t create political breakthroughs but can accelerate a change that’s already in progress. After Clinton helped pave the way for the U.S. to restore diplomatic relations to Burma, the State Department sent a basketball envoy to the country later that year and a soccer envoy two years later.

The liberal ideals and meritocracy of sports are in line with American values; such a program “helps to advance the U.S. agenda,” Cha said.

The basics of baseball are similarly universal. There is a bat and a ball, three outs to an inning, nine players to a side, and bases the same 90 feet apart.

But while the premise of scoring runs remains the same, some other taken-for-granted particulars are left open to interpretation in the poorer parts of the world that cannot afford the fineries of the sport, where even the seeming necessity of a pitching mound becomes optional.

Gustavo Ramos is a 48-year-old teacher at a technical school for high school-age children in Minas de Oro, Comayagua, an old mining town in Honduras. Ramos also coaches baseball, using the sport to engage a troubled 8-to-13 year-old demographic in his area despite lacking many of the tools and amenities taken for granted in the United States.

“They only know of a mound [in theory],” Ramos said through a Spanish interpreter, noting he had to improvise a diamond and field on a soccer pitch.

Ramos spoke at the conclusion of a coaches’ clinic organized by the U.S. State Department a few years ago and hosted by the Reds at their spring training facility, with Hall of Famer Barry Larkin and three-time All-Star Ken Griffey Sr. serving as instructors. Clutching a baseball, Ramos explained the difficulties facing his community and how sports are an important tool in occupying the idle time of at-risk youth.

“These are kids that have been exposed to gangs, smoking, alcohol,” Ramos said. “If everybody gets this teaching in my country, baseball would be at a better place, and we’d be able to save a lot more kids.”

Larkin has traveled to Colombia, Taiwan, and Korea; Ken Griffey Jr. went to the Philippines. In each location the players run baseball practices but also spend time delivering a message crafted for the local children.

On Larkin’s trip to Korea in February, where there is a strong educational system, he said he preached the importance of being well-rounded and that sports achievement complements academic pursuits. On his trip to Colombia, where the educational system lags, Larkin spent more time emphasizing school.

“I loved it,” Larkin said of the trips. “It was an opportunity to connect with kids and see the world. We’re not promoting any political campaign or purpose.”

When Hucles visited Israel and Namibia, the mission was youth outreach. Race and gender were other common themes. In the Ukraine, there was a focus on LGBT topics.

“That was a hot issue at the time and how to talk about those issues through sports,” she said. “A lot of times people don’t safe in their own countries talking about that, so having an American being able to use their voice on behalf of others, I think was very powerful.”

While Larkin primarily met with Korean youth, he also met with a group of actors and comedians and, on a military base the next day, saw a women’s professional team defeat the soldiers in a game that turned into an impromptu battles of the sexes.

There is a sharing of cultures that happens too. When Larkin and his envoy—which also included a U.S. cultural affairs officer and another retired major-leaguer, former Expos pitcher Joe Logan—passed through Seoul, they visited the Korean Traditional Food Institute, where they donned traditional hanbok and learned to make homemade rice cakes.

“It was good, man,” Larkin said. “We beat the crap out of it to make it nice and smooth.”

Griffey Jr.’s first work for the State Dept. occurred when he was still an active player for the Mariners in May 2010. Before a road game in Baltimore, he hosted about 20 Iraqi baseball players and coaches, giving Nike gift bags with jerseys, baseball cards and the ultimate American ballgame essential, Big League Chew. The Iraqis wished him well on hitting 1,000 home runs, which prompted a laugh. After they presented him with an Iraqi baseball jersey, Junior quickly covered the adidas logo, which also prompted a laugh.

A national board member for the Boys and Girls Club of America, Griffey Jr. has taken a special interest in helping disadvantaged youth, which he continued with his first envoy travel to Manila and Seibu in the Philippines.

At one point he took a few swings at a ballfield and sent one home-run ball out of the stadium’s confines, smashing the front windshield of a Lexus beyond the wall, prompting several stories in local news outlets, including one under the headline, “Lexus car victimized by Griffey’s power homers.”

Back in Goodyear Griffey Sr. said, “He emailed me about it.” He paused and then spoke with a smile and a father’s admiration, “I guess he’s still swinging.”

That this State Department-commissioned instruction is done in the name of country has great appeal for the Griffey family.

“That’s big,” said Griffey Sr., a minor league instructor for the Reds who previously managed the organization’s Class A team in Bakersfield, Calif. “I enjoy teaching as much as I possibly can.”

While instructing the coaches from Honduras, Griffey Sr. advised on topics that were both baseball-specific—to select the right bat length, hold the knob to middle of your chest, extend your arm and you should be able to cup your hand over the barrel—and on the best interaction with young players. One of Griffey’s key teaching points was to keep players close to the coach for more engaged instruction and the ability to make quick corrections.

And while an interpreter was standing nearby to break down the language barrier, at times he wasn’t needed. When one of the coaches demonstrated a throwing motion while asking a question about technique, Griffey said, “I knew exactly what he was saying, and I didn’t understand him.”

The nine coaches from Honduras, whose experience at the time ranged from six months to five years, returned to face significant challenges in reaching youth back home. They still wouldn’t be able to build a mound on a soccer field, but thanks to the States-side clinic, they could improvise, having learned the specifications to build a mound out of wood like many American teams use indoor during the winter or inclement weather.

The coaches Gallimore tutored in Morocco all continue to grow in their appetite for the Beautiful Game.

“It does seem like they’re doing well and progressing,” she said. “There’s a lot of soccer posts.”

Sports, after all, are universal, even when a few details change in translation.