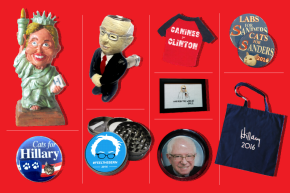 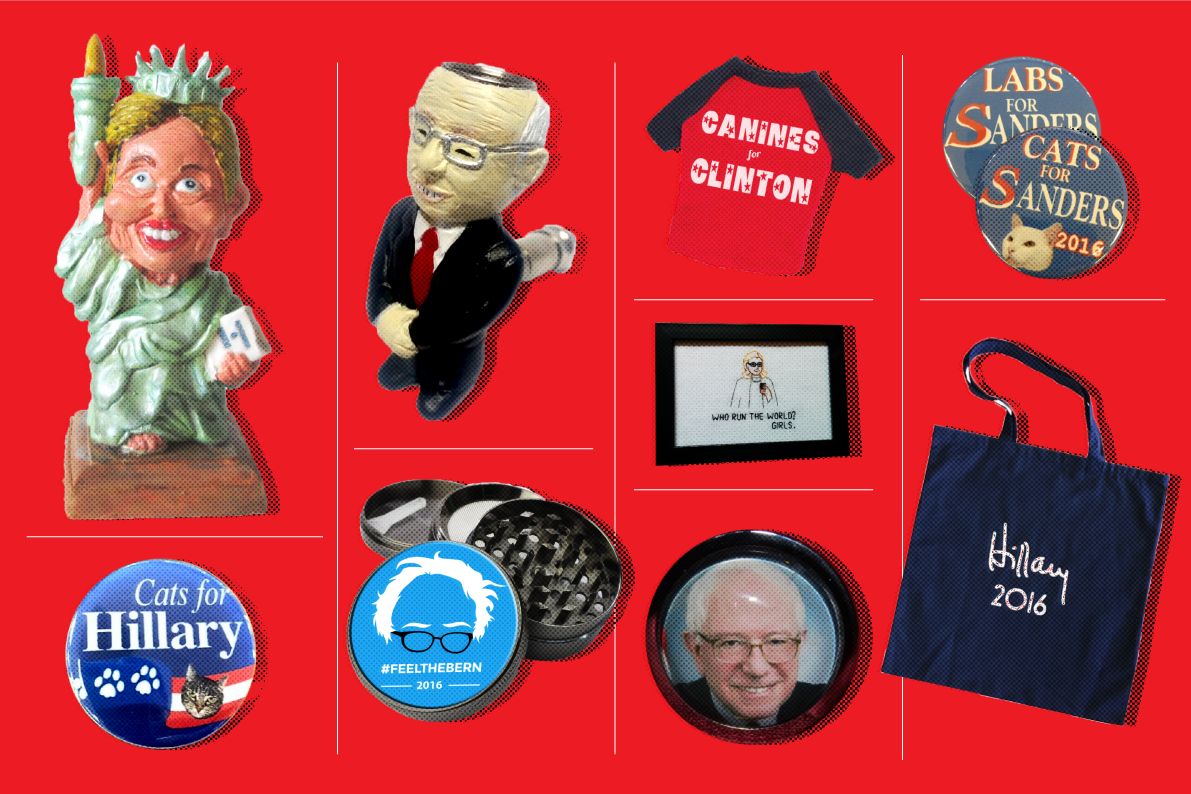 During primary season, the only place you might think to cop some candidate merch is through their respective websites. But to do so would be to pass up an entire world of campaign gold. Really, how better to express your support for Bernie Sanders than with a Bernie Sanders butt plug? (Don’t worry Team Hillary, this is not a Bernie exclusive.) But where would you even look for such a thing? Etsy, of course!

Vocativ analyzed the Etsy search results for “Bernie Sanders” and “Hillary Clinton,” and if the presidential race were unfolding according to what pops up on Etsy, the Vermont senator would be well in the lead. Our search revealed 3,250 Bernie-related items on Etsy, compared to 1,198 for Hillary. Some of the items were tangentially related to the candidates—or seemingly unrelated—but for the most part, the results gave us a peek into the wild world of the online craft marketplace.

Despite the wider selection of DIY Bernie gear, DIY Hillary swag commands a highter price per item: $63.54, which is more than double the $24.91 that your typical Bernie memento sells for.

When it comes to most expensive item, Hillary Clinton continues to rule the luxury market with a $50,000 oil painting. Bernie and his populist supporters could only manage a $10,000 drawing. That one Hillary painting clearly skews the average price comparison, but it’s fitting that in unauthorized memorabilia, as in public policy, Bernie is a man of the people.

Looking at hot-button social issues, the candidates merch is split. Hillary supporters are selling various flavors of Clinton-themed feminist needlepoint. Bernie supporters are maybe-unsurprisingly selling a variety of accoutrements for smoking weed, like this marijuana grinder or this other marijuana grinder or this pipe made in Bernie Sanders’ likeness. There are plenty of other ways to proclaim your love for pot and your love for Bernie, like this set of pro-dabbing stickers.

That said, there’s some common ground to be had here: These factions might not be able to agree on which candidate is best, but at least Clinton and Sanders’ craftiest supporters can unite over their mutual disdain for the Donald.

After you advance beyond the Hillary Clinton tote bags, Bernie Sanders keychains, and standard Etsy fare, you will realize that a lot of this shit is weird. So weird that it calls to mind Regretsy, the now-defunct site that once documented all of the ill-formed ideas which appeared on Etsy. Case in point: this Hillary Clinton caricature garden gnome, dressed as the Statue of Liberty. (And it’s only $37.45!) Or maybe you want a bespoke Hillary Clinton pointillism drawing, wherein our probable Democratic candidate looks slightly cross-eyed. There’s a whole set of Bernie Sanders decals that you’re supposed to put in your toilet to help the men in your life aim, but it’s hard to say whether the stickers are pro-Bernie or anti-Bernie.

Maybe sellers earnestly believe that there are people out there that want to politically brand their entire lives, but ultimately, there is no rhyme or reason behind many of these products. And while we know who is selling these things, we’re still left scratching our heads over who—if anyone—is actually buying them. But no matter your political leanings, or taste in homemade crafts, the one thing you can say is that there’s truly something for everyone.