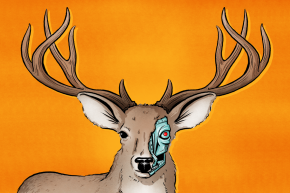 The M&M-Pooping Deer Robots That Are Fooling Poachers 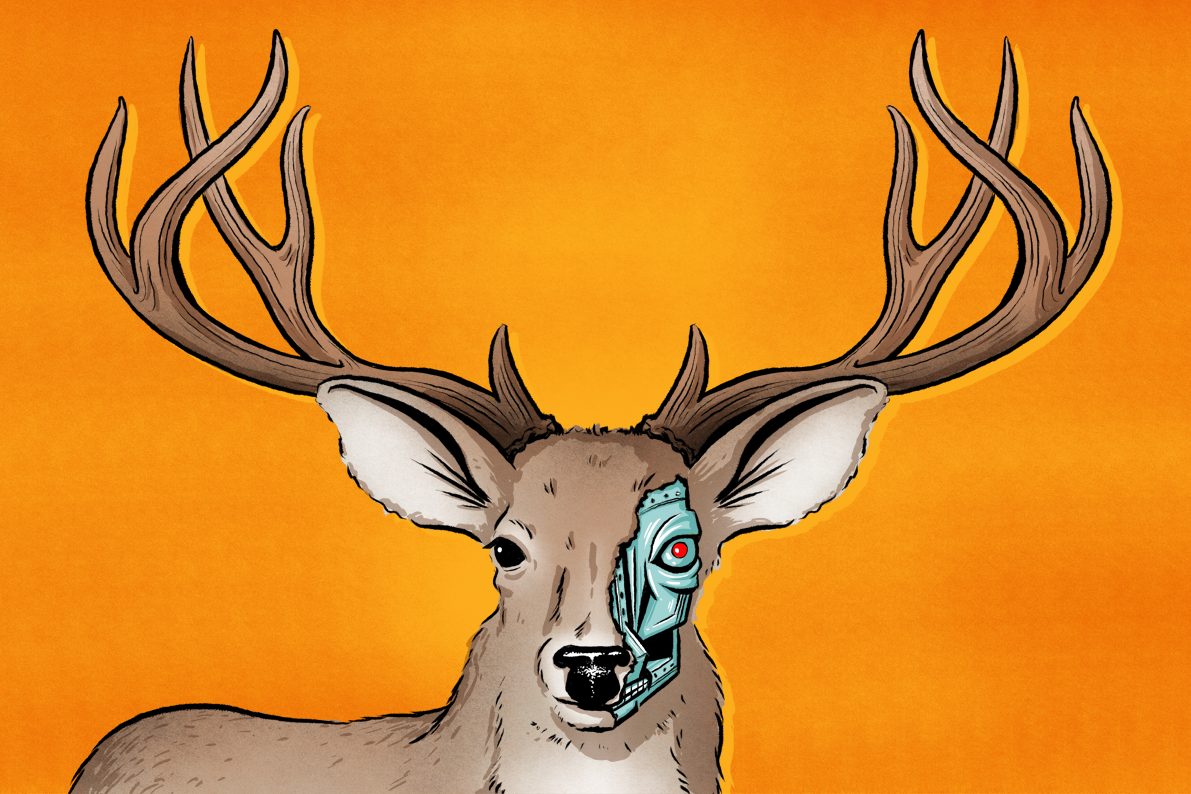 This July, Brian Wolslegel will debut his latest and greatest work—a robotic taxidermy deer that lifts its tail and poops M&M’s.

“I think once it comes out, everybody’s gonna want it,” Wolslegel said. “It’s got its head down to the ground like it’s feeding or grazing in the grass. We put a moving front leg on it so it paws the ground a little bit. I got a robotic ear on it—just because. And then it sticks its tail up and poops. That’s the ultimate model.”

Wolslegel is unveiling this latest feat of artificial excremental mechanics at July’s North American Wildlife Enforcement Officers Association annual conference in Burlington, Vermont. Over the last 20 years, he’s impressed wildlife conservationist officers, called game wardens, attending the event with his lifelike robotic decoys made out of the carcasses of boars, moose, turkeys, coyotes, black bears, grizzly bears, you name it—most of which were donated to him after roadside accidents or humane euthanasia. Within his 40-foot-by-50-foot metal shed in Mosinee, Wisconsin—part mechanic shop, part hide-skinning lab—he transforms these corpses into animatronic bait for poachers.

For decades, fish and wildlife agencies have used animal decoys to catch poachers, but Wolslegel built one of the first truly mechanical devices in the early ’90s when a local officer asked him to make a model that moved. Wolslegel started out by putting a remote-control car motor in the ear of a taxidermy dear to give it a hint of life. Soon he started connecting the ear to the tail with a fishing line so the tail would wiggle with the ear. His creations got more elaborate from there as he experimented with new motors, pumps, augers, and 3D printers.

Today there are hundreds of robotic decoys throughout the American wilderness—from coastal Washington to the Jersey Shore. These antelopes, coyotes, bears, and other wildlife are placed strategically near roads and in wildlife preserves practically begging for lazy poachers to pierce their gear-and-sytrofoam innards with a rifle bullet. Near each decoy is a hidden wildlife conservationist with a remote control. As soon as someone shoots the animatronic game, other agents rush out to arrest the illegal hunter.

“It’s very effective. It’s surprising how effective it is. I have some game wardens I work with and it’s their number-one tool against busting poachers,” said James Reed, director of stewardship at the Humane Society Wildlife Land Trust (HSWLT) and head of their Robotic Decoy Program. “Poaching is a huge problem globally and anything we can do to help alleviate the illegal hunting and poaching that is taking place in this country we’re determined to do it.”

According to the HSWLT, tens of millions of wild animals around the world are killed illegally every year. Wardens often go after poachers who target endangered or protected species, but they also trap deer poachers since these hunters will often shoot dangerously at night near roads, private properties, and homes in their quest to acquire and sell as many antlers and organs as possible.

Reed orders robotic decoys from Wolslegel and five other taxidermists for about $2,000 each, then donates them to wildlife agencies. Since the program’s beginning in 2004, the HSWLT has given out 30 decoys to 22 agencies in 20 states and one Canadian province. HSWLT is one of Wolslegel’s top clients, but he also works with hundreds of other law enforcement groups. And most of his innovations—from swiveling heads to track movement to hidden-camera eyes to poop-action—were inspired by officers and private individuals challenging him to try new things.

“Lots of times the customers dictate a lot of what we come up with. A couple weeks ago I was working on a project for a lady in China who wanted an Emperor penguin.” Wolslegel said, “A couple weeks before that I had a lady email me and said her 18-year-old son is autistic and he loves foxes and he wants a pet fox. And she couldn’t figure out how to get a pet fox to him until she saw my website. So we built him a sitting red fox and its head moves and its tail moves and he loves it.”

Wolslegel has built a few novelty items like an African lion with a moving head that follows people around a real estate office in California and talking deer heads that announce lunchtime at a guest ranch in Texas. But as a conservationist who owns about 40 deers himself, Wolslegel prefers to do taxidermy that helps preserve wildlife populations. He gets a certain thrill creating the 90 percent of his work that goes to stopping poachers. “A lot of what we do is play with people’s minds,” he said. “It doesn’t take a lot. We can put the deer on a swivel base so he can slowly swivel, so it looks like they’re moving if you’re driving by. A lot of times poachers come down the road, spot the deer, drive by it, load up, come back, and that’s when they shoot.”

But his latest creation is meant to get into the mind of the poachers who might take a second look through the magnification of a rifle scope. If the would-be criminal doubts the deer’s authenticity, then a tail lift and scat dropping should convince them to pull the trigger.