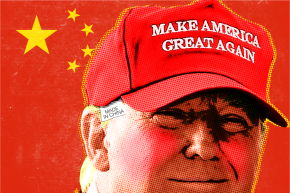 Meet The Chinese Americans Mobilizing For Trump
By Ethan Harfenist

When Tony Xu Xu, 45, became a citizen of the United States in 2008 after living in the country for 11 years, the Chinese American realtor began his political journey like many people of Asian descent do—as a Democrat. He voted for Barack Obama twice. Nowadays, though, Tony is plugged into a vastly different political community: he is an active supporter of Donald Trump, and a member of “at least” three pro-Trump groups on the popular messaging app WeChat.

“When we came to the U.S., you hear that Democrats are always on the side of minorities. But if you study their policies in detail, we feel it’s the other way around,” Tony told Vocativ. “Democrats help those who don’t want to work and penalize those who want to achieve the American Dream.”

Despite Trump’s infamous tirades against China, a contingent of Chinese Americans in California are flocking to the belligerent business mogul’s presidential campaign. While many admire Trump’s business-savvy style and financial success, some members of this community Vocativ spoke to said they feel spurned by the policies of the state’s Democrats, viewing the country’s increasingly liberal direction with suspicion.

Enter WeChat: The wildly popular app has emerged as a major mouthpiece for Chinese American GOPers. In California, it’s being used to mobilize possible supporters ahead of the state’s June 7 primary. Groups such as Chinese-Americans For Trump (CAFT), founded last year by Los Angeles resident Wang Tian, are now tapping a demographic that is increasingly attracted to Trump through the power of the app, which last year counted 1.1 billion registered accounts and 650 million active users worldwide.

Wang recalled an instance to the Chinese tabloid Global Times. On May 5, a news piece about Democratic front-runner Hillary Clinton asking Chinese Americans to pose for photos with her at a fundraiser that ran attendees $2,700 was posted to the group. The group quickly organized a protest, but Clinton left the event before they were able to arrive. Still, Wang took to his personal WeChat account to carry on the demonstration, asking “all Chinese Americans with a conscience” to share the post.

“WeChat is a very very powerful tool that has been used by the Chinese community in the last two years,” Peter Kuo, a Republican Taiwanese American who is seeking election to represent California’s 17th District in the House of Representatives, told Vocativ. “It’s incredibly powerful because it links the entire community and the base of supporters together. It’s incredible.” Kuo said he receives anywhere from 20,000 to 25,000 text messages per day on WeChat, and went on to describe the app as “WhatsApp and Facebook—on steroids.”

In addition to checking in on the pro-Trump groups, Tony says he uses the app to get news that offers counter-narratives to mainstream outlets.

Kai Zhu, 42, a Chinese American patent litigation lawyer and Trump supporter living in California’s “Silicon Valley,” is also part of some politically active WeChat groups. Like Tony, Kai said he uses the app to get some of his news, and he noted that WeChat’s Chinese origins and widespread use by the diaspora make it particularly appealing for communities in the U.S. “It’s just like Facebook or Snapchat. But because it was built by Chinese, they know what features are convenient (for their users),” he told Vocativ.

Such blatant Chinese pride might not go over so well with Trump, who’s vowed to boycott Apple for using Chinese manufacturing (though he still owns stock in Apple and is often photographed on his iPhone). Nonetheless, many Chinese-American Republicans are undeterred by the presumptive Republican nominee’s anti-China streak: Kai spoke of American politicians bashing China as if it was mandatory move on both sides of the aisle. Tony pointed to a YouTube video of Arabella Kushner, Trump’s four-year-old granddaughter, speaking Mandarin (His text message: “I don’t believe the claim that Trump is a racist or anti-Chinese.

Her pronunciation is very accurate, even better than some ABC [American-Born Chinese].”) Kuo even said Trump’s famous “Make America Great Again” hat was a point of pride: after all, it is made in China.

In reality, Chinese American advocacy for Trump in California stems less from blind admiration of the man—the Trump supporters I spoke to all said they were backing different Republicans prior to their exits—and more from disillusionment with Democratic Party. Democrats’ efforts to expand affirmative action in the form of two proposals have particularly struck a nerve with members of the community: Senate Constitutional Amendment No. 5, which asks voters to overturn a state proposition that prohibits California from considering race, sex, color and ethnicity for admissions to the state’s public colleges and universities, and Assembly Bill 1726, a measure that would divide Asian-Americans into 25 different ethnic categories in an attempt to assist smaller minorities in California’s public university system. Both were introduced by Democratic lawmakers.

“You’ll have to check your ethnic box. They don’t do that to Latino people, divide them by country,” Kuo, whose district counts the largest Asian American population in the country outside of Hawaii, said. “They [Democrats] throw merit out the window. Being a successful minority hurt us.”

For Tony, such legislation’s implications stretch far outside of California: the affirmative action case Fisher v. University of Texas at Austin is still being heard by the Supreme Court, and so it’s more important than ever for a conservative judge to replace Justice Scalia’s seat. After Trump released his possible Supreme Court picks, Tony said, “I’m pretty happy with the list.”

Of course, these Trump supporters don’t represent their entire community, who number over 1.3 million alone in California. According to a 2012 report by the Pew Research Center, Chinese Americans, much like the Asian-American population as a whole, tend to gravitate toward the Democratic end of the political spectrum: 49 percent of Chinese Americans identified as Democrats, while 26 percent said they were Republicans.

On the other side of the aisle, there are those Chinese Americans who are supporting Democratic hopeful Hillary Clinton and view Trump’s anti-Muslim and anti-Mexican rhetoric as reminiscent of a time when their ancestors were barred from entering the country through the 1882 Chinese Exclusion Act.

“It’s a bit shocking that Trump has talked about banning Muslims,” said Nick Lee, 23, a third-generation Chinese American originally from Berkeley, California, now living in Washington, D.C. Lee volunteers for Chinese Americans for Hillary, which operates under the banner of her larger Asian-American and Pacific Islander outreach campaign.

Lee said that his political outreach efforts haven’t included WeChat yet, and that he stuck to more “traditional” social media outlets such as Facebook and Twitter to reach supporters (not to mention phone calls). Still, he said, tapping technology such as WeChat could be helpful going forward in terms of connecting with the “very diverse group” that is Chinese American voters. “We’re looking into it,” he said.