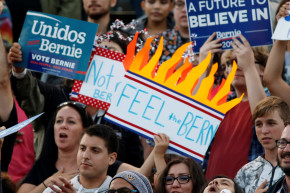 Losing But Not Done, Bernie Sanders’ Fans Are Getting Angrier
By Jacob Steinblatt

Losing But Not Done, Bernie Sanders’ Fans Are Getting Angrier 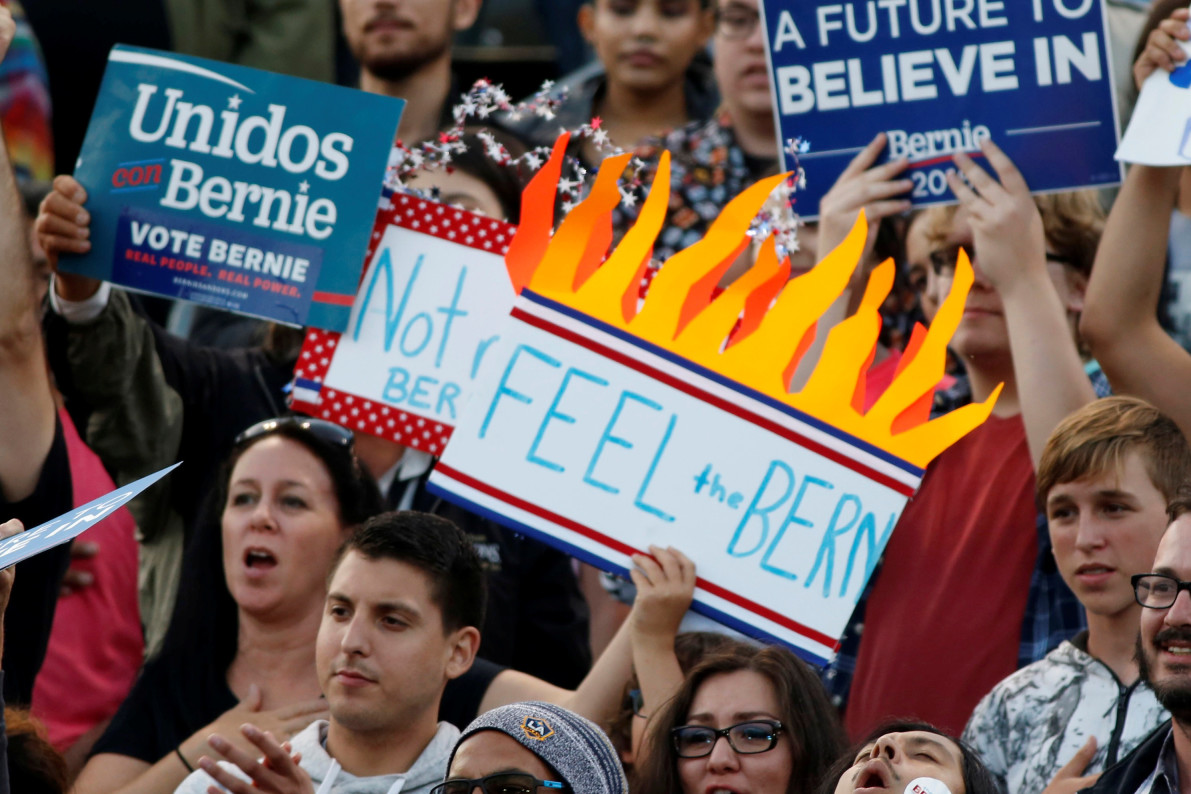 Bernie fans stand at a Sanders campaign rally in California. — REUTERS
By Jacob Steinblatt
May 18, 2016 at 12:24 PM ET

Bernie Sanders clinched a convincing victory over Hillary Clinton in Tuesday’s Oregon primary and landed a very close second in Kentucky. But, despite Sanders’ strong showing, he trails Clinton by a nearly insurmountable delegate margin. As the Vermont senator’s path to the nomination disappears, his most fervent supporters are moving from enthusiasm to anger.

After Hillary Clinton won the majority of delegates at Saturday’s Nevada Democratic Party convention—a win many Sanders fans blamed on an unfair party decision—anger and in some cases violent threats erupted from his followers. Rallying around the hashtag #SeeYouInPhilly, Sanders supporters are vowing to go to the Democratic National Convention in Philadelphia in July to protest the party they feel has treated their candidate unfairly.

For weeks, Sanders fans have been enraged by what they say are incidents of fraud and voter suppression, accusing the Democratic Party of working against Sanders so Clinton can secure the Democratic Party nomination for president. Their anger swelled over the weekend when Clinton secured a delegate lead after some people supporting Sanders were disqualified from the convention, prompting Sanders fans to erupt in protest. They reportedly threw chairs and shouted obscenities.

The hashtag #SeeYouInPhilly has been mentioned in more than 33,000 tweets since the beginning of April, and 12,500 since May 14, the date of the Nevada convention, Vocativ discovered. Sanders fans have shared it across Twitter, Facebook, and other social media platforms, sometimes directly attacking the chairwoman of the Nevada Democratic Party, Roberta Lange, who has received an onslaught of threatening messages. Other times, the hashtag has been used to call for violence and declare war against the Democratic Party.

If you think #nvdemconvention issues suck, just wait till July.#SeeYouInPhilly will be fog of war, info blackouts, repression.
Stay flinty.

Damn right. It's war now. #nvdemconvention@rlange9 you have no idea what you have just done#SeeYouInPhilly https://t.co/ExCVaBJuJz

The hashtag’s rise parallels another growing internet community: the r/BernTheConvention subreddit. Created less than two weeks ago to urge Sanders supporters nationwide to protest the Democratic National Convention’s alleged bias toward Clinton at the convention in July, it has since grown to include more than 6,500 members. Concerns there will be chaos at the GOP convention are now mirrored with fears of unrest at the Democratic event as well.

On Monday, the Nevada Democratic Party’s general counsel, Bradley Schrager, wrote a letter to the Democratic National Committee warning about the possibility of violence. “We believe, unfortunately, that the tactics and behavior on display here in Nevada are harbingers of things to come as Democrats gather in Philadelphia in July for our National Convention,” he wrote.

The letter included examples of what Schrager said were thousands of crude and threatening voicemails and text messages from Sanders supporters targeting the party’s chairwoman.