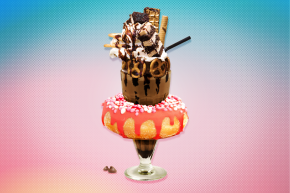 These Frankenfoods Are Thirsty For Social Media Buzz
By Leslie Horn

These Frankenfoods Are Thirsty For Social Media Buzz 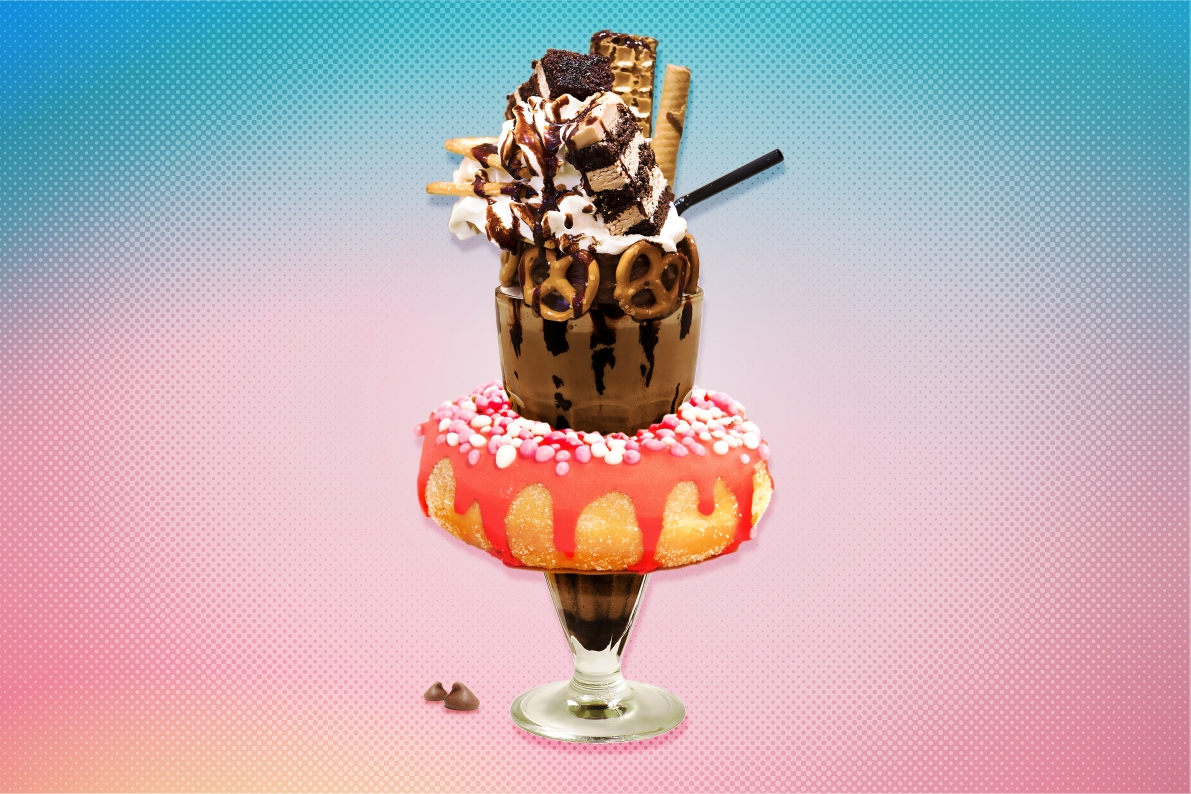 A few weeks ago, Vinny’s, a North Brooklyn pizza joint, started selling a pizza box made entirely of pizza. It was a gimmick that quickly earned the joint internet fame, and a place in the pantheon of foods that include gold leaf cheeseburgers, Oreo-filled bagels, and Cronuts. They are fantastical, borderline absurd food items that are purposely engineered to be photographed and shared. Who cares if they actually taste good? They’re Instagram bait, and they play an ever-more-important role in the way purveyors of food reach potential consumers. In an age of ad blockers and streaming services that let you skip commercials, Instagram bait foods are ads you won’t skip.

So just what is Instagram bait? The exact form of food varies, but edible social media darlings always have similar qualities. It’s usually a new creation that’s touted as something that’s never been seen before, like a ramen burger, or a $100 golden donut, or even a sushi burrito. It’s usually touted as a particular restaurant’s unique creation, and then before you know it, it blows up on Instagram, in all of its appetizing, enticing, and perfectly-lit glory.

Black Tap Burger’s gravity-defying milkshakes that include entire donuts or whole birthday cake slices showcase this phenomenon at its most brazen. Does it look too good to eat? Who cares!
.

Nell Potter, who runs social media for the food site The Infatuation, cites Black Tap as an example of a new type of food marketing. “They originally weren’t making the milkshakes to sell. They were making them just for social channels. Then kids were coming in being like ‘hey where are these awesome milkshakes on your Instagram?’ I think they realized pretty quickly that people want this we should just make them.” Black Tap’s 1,600 calorie shakes now have people waiting in lines as long as several city blocks.

The granddaddy of modern Instagram bait is the now-famous Cronut, the unholy union of croissant and donut pastry chef Dominique Ansel debuted in the Summer of 2013. Lines that stretched several SoHo blocks formed daily at the crack of dawn, populated by people hoping to snag one of the few Cronuts the SoHo bakery made each day. Sharing an Instagram pic of the Cronut signified both prestige (showing the internet world that you rubbed elbows and taste buds with the famous pastry) and valor (waiting for hours in that massive line). Though the Cronut has its roots in New York City, its effects have been felt nationally. Dominique Ansel trademarked the word “Cronut” nine days after its inception. In the months after the mayhem began, approximations of the pastry have popped up everywhere from Los Angeles to Jacksonville. Even Dunkin Donuts made its own version.

No Instagram bait foods have approached the giddy viral novelty of the Cronut. But they’ve certainly tried.

Now, rainbow-colored food is all the rage. We have the rainbow bagel to thank for that. Brooklyn’s The Bagel Store, a neighborhood staple for many years, went mega-viral when its technicolor dream pastry caught the eye of social media users (and, eventually, such big-time players as Stephen Colbert and ESPN). Once the viral frenzy started, it wasn’t long before The Bagel Store was attracting the lines so long it had to shut down temporarily.

Because those chasing virality have no chill, rainbow grilled cheese sandwiches have popped up, and coffee shops are peddling rainbow lattes. “I don’t know if people actually want to eat it or if they want to take a photo of it,” Potter adds. “It’s this whole mentality of creating an imaginary world on the internet or on social that it’s this perfect life. A milkshake you could go and make in the grocery store, but to go to that place able to be like, ‘I had this experience that you didn’t have and I have this crazy photo and now I have all these likes.'”

But rainbow food, or whatever the craze of the moment may be, is fleeting.  “This is just one of those over-the-top food trends,” writer and food stylist Lesley Stockton tells Vocativ. “Remember when people put fried chicken in Bloody Marys? It’s just another trend, and also it’s just so colorful. Rainbow bagels, candy-crusted milkshakes. That stuff shoots really well because you have all these colors in the mix. If you’re gonna shoot like bins and bins of colorful gummies, that’s automatically going to look better than just brown fried food. I think one of the reasons things like rainbow bagels are taking off are because they look good.”

While these trends are shared amongst normal, photo-appreciating folks, they’re often driven by a class of social media personalities known as influencers. They’re people who may have a couple hundred thousand followers on Instagram, whose posts of menu items from various restaurants easily rack up thousands of likes. They may not necessarily make money posting photos of food, but they’re rich in followers, and restaurants will compensate them with free food in exchange for free promotion on their accounts. “It’s a valuable form of promotion, but I think the average person doesn’t realize they’re being paid, Potter says. “It’s not the most genuine form of advertising.”

For restaurants that don’t that advertise on the large scale of TGI Fridays or Outback Steakhouse, appealing to Instagram’s popular table is a quick way to attract word-of-mouth and media attention. For several years, Anthony Jackson ran social media for the Alta Marea Group, a hospitality organization that includes 15 restaurants in Manhattan, Washington D.C., and Hong Kong. He says influencers were an important part of the promotion equation. “In this day and age, having people talk about what/where they’re eating and showing it off to their friends online (and sometimes whether or not they liked it) is definitely something that restaurant owners all want,” Jackson says. “Many of them in NYC, including the company I recently left, will host influencers with large social followings for a free meal or even a fee in some cases, to share these ultra crave-worthy shots with the influencers’ respective audiences. Influencers definitely have a reach that restaurant owners want to hit.”

And they’re proof to restaurants that Instagram bait works.  “It’s the same people perpetuating the cycle,” Stockton says. “You have an inspired person making a donut; you have all these people on Instagram who just want to be influencers by posing with a donut. It’s 100 percent vapid.  But I will say, in spite of all all that, The pictures are beautiful. They really are.”

Instagram bait often starts a food trend ripple that doesn’t take long to go national. Open up Instagram, and search the #foodporn hashtag. Or spend some time perusing the Explore tab. Chances are, you’ll stumble across a Black Tap shake impostor, like the one pictured here from the OC Night Market in California:

Potter says she sees these types of over-the-top food trends globally too, from US to Australia to Jakarta, where she says the “ice cream scene” is “insane.”

But is Instagram bait a bad thing? These ‘grammable foods are pure gimmick, but there’s nothing particularly malicious about them. It creates new business for restaurants, it lets people eat items out of a Willy Wonka fantasy, and on some levels, it delivers a kind of edible joy. It’s perfectly normal to want to take the bait.