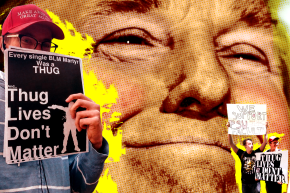 How Trump’s Student Fringe Trolled Their Way To Viral Fame 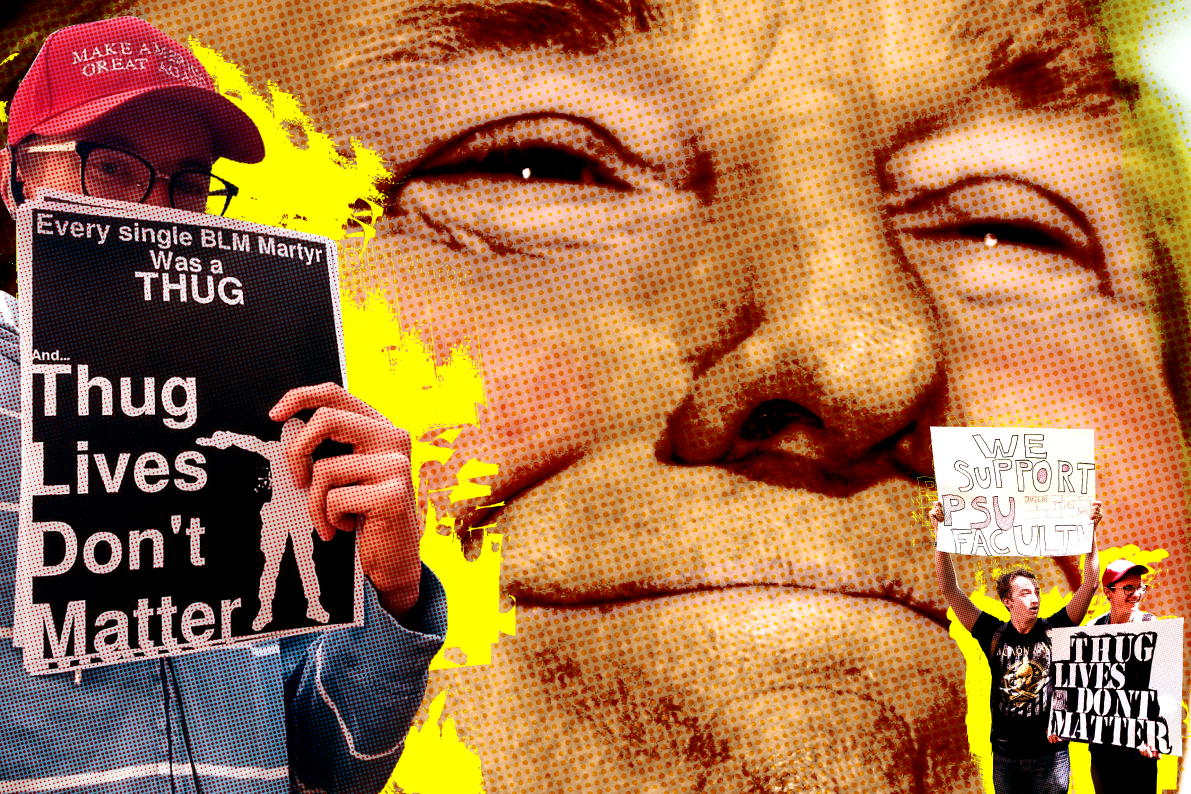 About 150 people gathered on a recent Tuesday to protest Portland State University’s armed police force, a scene not uncommon on the leafy, left-leaning campus nestled in the heart of Oregon’s largest city. Stephen Johnston, a college sophomore, only needed to enrage one of them.

A leader of the school’s Students for Donald Trump, Johnston was almost giddy when he arrived at the Disarm PSU demonstration, clutching a pair of homemade signs. “Oh shit, dude,” said Volodymy Kolychev, Johnston’s lanky comrade and co-founder, when he saw the placards. The first one was somewhat innocuous. It read “We Support PSU Faculty,” with “Build The Wall” scrawled next to it.

Kolychev, a 19-year-old economics major and first generation Ukrainian immigrant, adjusted his glasses and fidgeted with his red “Make America Great Again” baseball cap. Johnston grinned. “We’re going to troll them as much as possible,” he said. Local leaders of the Black Lives Matter movement, who had helped organize the walkout, led the crowd in chanting, “We want real diversity, not a police state university.”

Johnston, along with Kolychev and four other Trump supporters, spent the next few minutes waving their signs from the sidelines, before Johnston decided he wanted a bigger piece of the action. Grabbing the “Thug Lives Don’t Matter” sign, he marched right into the middle demonstration yelling the obnoxious slogan at the top of his lungs. Within seconds, a protestor rushed at him, ripping Johnston’s sign in half and nearly bowling him over. Johnston sprung to his feet, holding the torn placard above his head and shouting even louder. He was elated.

Mission accomplished. Yet another unhinged liberal caught on a clip with the potential to soar among the wider online Trump community, most of whom live far from Portland, which Glenn Beck dubbed The Worst City In America. While Johnston and Kolychev say they hope to eventually turn their fledgling army of Trump supporters into campus juggernaut, they are firmly focused on a more immediate objective. Antagonize PSU’s social justice activists. Provoke their most passionate followers.

“Our movement right now is to divide and conquer,” said Johnston, who’s 20 and studies electrical engineering. “It’s to further expose the left to the rest of the world”—one viral clip at a time.

They’re not alone. Across the country, students who’ve felt marginalized by a rising tide of tolerance and political correctness on college campuses have seized on Trump’s cocksure brand to roil academia’s cultural gatekeepers. The presumptive Republican nominee’s brash comments about Muslims, women, Mexicans and disabled people have alienated millions, but also excited others who’ve apparently been dreaming of voicing similar thoughts themselves.

For those who have seethed over student-led wars waged against “culturally insensitive” cafeteria food or Halloween costumes, or protests against cops or the name of Washington’s football team, Trump has become the weapon with which to strike back. Thanks to the internet, a few campus outcasts can reach a wide audience that’s clamoring to see some seemingly entitled college kid lose his mind over a little lighthearted racism.

“I see Trump as a kind of cultural bulwark against these people,” said Kolychev, a self-described “racial realist” and “authoritarian free-market enthusiast” who waxes rhapsodically over former Chilean dictator Augusto Pinochet. “I consider my support a vote for Trump. But, just as importantly, it’s a vote against them.”

Throughout the presidential primaries, students have erupted into impromptu battle cries of “Trump! Trump! Trump!” to drown out those shouting “Black lives matter!” at campus events. They’ve used sidewalk chalk to scrawl messages in support of the self-proclaimed billionaire at more than a dozen universities, prompting progressive activists to protest and petition against them. Earlier this month, a group at the University of Washington even erected a fake 8-foot wall on campus—much to the chagrin of anti-Trump agitators.

In the past, these attention-seeking stunts might elicit little coverage beyond a college’s student newspaper. But like the blustery showman they embrace, Trump’s campus crusaders have managed to grab national headlines, drum up page views and spread their antics online with remarkable success. That’s due, in large part, to the reactions they’ve inspired—and the ability to capture and disseminate them. It’s trolling 101. But instead of baiting foes on 4chan or Reddit, it’s real life.

Which is precisely what happened at Portland State, a hotbed of liberal activism in the middle of one of the most proudly progressive cities in the U.S. Fans of the burgeoning alt-right movement, Johnston and Kolychev said the idea for starting a pro-Trump group at their school came after a Facebook page promoting a White Student Union at PSU emerged late last year, triggering waves of outrage on campus. No such organization actually existed, it was later revealed. But the response it generated was visceral, something that Johnston and Kolychev said they found both hilarious but also emblematic of a reactionary impulse on campus that they loathed.

So the pair put their heads together. And started agitating. They launched their Portland State Students for Donald Trump Facebook page in January, populating it with pro-Trump memes and other content geared toward baiting their progressive peers on campus. After a few months of angry and sometimes threatening messages—which they’d gleefully screen grab and publish—Johnston and Kolychev decided to hold an official meeting for the group. In a nod to #TheChalkening movement underway at other schools, they advertised the event in sidewalk chalk.

About a dozen or so Trump supporters showed up for meeting, held at a campus cafeteria, on April 7. They were met by more than 100 student protestors bearing “Stop Hate” banners and other signs. The scene, captured on video, was chaotic. The crowd roared and chanted. Students shouted and jumped on tabletops. One of the protestors even threatened to fight Johnston, who had goaded him and other anti-Trump activists while filming the simmering feud.

Though both sides engaged in a heated back-and-forth, it was a handful of the protestors who took a decidedly aggressive tack. A few shoved Trump supporters as they tried to walk through the crowd. Others hurled expletives and threats. Another activist grabbed a “Make America Great Again” hat off the head of someone and threw it across the room. At one point, the student who had wanted to fight Johnston told the crowd that the names, addresses and places of employment of the Trump supporters in attendance could be easy to find online.

Standing on top of a cafeteria table, Alyssa Pagan, one of the protest organizers, praised those who took an unflinching stand against PSU’s Trump posse. “This is what it looks like to actually get in the way of white supremacy,” she said. “White men are very used to shutting up people like me.”

Johnston and Kolychev could not have scripted a better showdown, they thought. “This was just bait,” Kolychev told PSU’s student paper The Vanguard. “We wanted to demonstrate how the radical left on college campuses is not sticking to classic, liberal democratic values or freedom of speech.”

It did not take long for the video of the event to go viral across conservative news outlets and social media networks. “Wackjob Commies CRASH ‘Students For Trump’ Meeting,” heralded the YouTube channel Laughing At Liberals, whose footage of the demonstration earned 350,000 views. “Shut Down: Portland State Black Lives Matter Takes Over Students For Trump Event,” read the headline on Breitbart, drumming up nearly 3,000 riled commenters.

Within a few days, Kolychev was giving interviews on InfoWars, the media channel run by noted conspiracy theorist Alex Jones. Johnston landed a gig as Oregon state director for Students for Trump, a national organization that operates independently from the Trump campaign. A week later, conservative media outlets, including Breitbart, helped the fledgling PSU Trump outfit organize a large rally in downtown Portland. Instead of a dozen, a few hundred rabid Trump fans showed up in show of solidarity. Predictably, clashes erupted between the presumed Republican nominee’s supporters and protestors, prompting another round of headlines and video.

The publicity, as well as Johnston and Kolychev’s willingness to confront left-leaning activists, has also earned them a few accolades on campus. During the Disarm PSU walkout, a reporter watched as some students furtively flashed a thumbs-up at the pair and their posse or gave them a sly, nodding approval. Others walked up to commend their bravery.

“I don’t like to see bullying or shutting down people’s opinions and free speech,” said PSU student Mitchell Hampton, who described himself as a liberal in an interview with Vocativ. “I wouldn’t say I support these Trump guys. But I appreciate the diversity of opinions.”

The backlash has also been pretty fierce, Kolchev admitted. He said he now constantly receives threatening emails and messages through Facebook. Those he can generally shake off. But he said he’s also been threatened with physical harm in person and even chased across campus on multiple occasions. He showed a reporter online posts where people mocked him for being a coward.  “I’m pretty risk averse in terms of physical repercussions,” said Kolychev, who is 5-foot-11 and weighs around 120 pounds. Throughout the day, he nervously scanned areas and looked over his shoulder.

Pagan, the anti-Trump organizer, did not dismiss the idea that Kolychev and his crew’s activity made them targets among some members of the activist community. “We will not stand idly by as they attempt to move from the Internet into real life,” she told Vocativ in an interview. “They can’t take their message to the streets. They can’t take their message to the university. We won’t let them do that.”

About an hour after Johnston’s interruption at the walkout, the Trump posse lingered outside a nearby parking garage to catch their breaths and crack a few jokes. As they bantered, a Hispanic man walking to get his car took one look at the “Make America Great Again” baseball caps sprinkled about the group and ripped into them. “I’m a veteran and this is bullshit,” the man said, pulling down the collar of his shirt to reveal a Marines Corps tattoo seared into his upper chest. “You guys need to wake the fuck up. You’re going to judge me just like Trump does.”

The Marine then launched into spirited conversation about The Donald’s brash rhetoric, U.S. foreign policy and how the billionaire and his supporters make people of color, like himself, feel. The Trump supporters listened respectfully and, at times, they passionately defended their candidate.

The sight of five white Trump supporters debating loudly with one person of color on the corner of the street was enough to attract the attention of three PSU activists who had been at the protest earlier. Using a few choice words of their own, the activists began to accuse the Trump supporters of harassing the Marine and demanded that they stop.

Sensing the moment, Kolychev instinctively reached for his phone and began filming.

“Don’t film me you mother fucker, you fucking racist piece of shit,” yelled one of the activists as she charged at Kolychev. The camera continued to roll for the next few minutes as the two groups bickered and hurled accusations.

“We were just afraid that all these white men decided to crowd around you,” another one of the activists finally told the Marine.

Another Trump supporter chimed in. “I”m Irish,” he said off camera. “I’m not white.”

Afterward, Kolychev’s phone started ringing. “Oh, my dad is calling to check if I’m dead,” he said, answering the call. “No dad, I’m not dead yet.” Then he uploaded the clip of the fight on Facebook and hit publish.