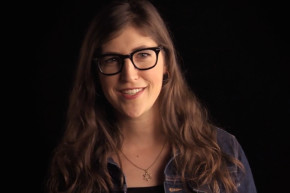 The Sitcom Star With A Secret PhD In Neurobiology
By Joshua A. Krisch

The Sitcom Star With A Secret PhD In Neurobiology

Mayim Bialik: "Being a scientist is as exciting, creative, and interesting as being an artist"

Mayim Bialik, known for her roles in the ’90s hit “Blossom” and more recently in “The Big Bang Theory” is something of an outlier—in both the acting and science worlds. That’s because in addition to being an award-winning actor, Bialik also holds a PhD in neurobiology.

“I had professors when I was an undergraduate who said, ‘Why are you here? If you could have the world of acting, why wouldn’t you take it?’,” Bialik told NOVA. But she never understood the supposed conflict between science and art. “Being a scientist is as exciting, creative, and interesting as being an artist,” Bialik says. “I don’t think there’s anything particularly spectacular about me that I have both acting interests and science interests. To me, that’s just who I am.”

Bialik first became interested in science while working as the title character of NBC’s “Blossom.” The actor had one particularly inspiring biology tutor, who taught her that, “Science is for women, science is exciting and you can be as passionate and in love with science as you can be about literature and art.” After her acting stint ended, Bialik attending UCLA where she “fell in love with the neuron” and began pursuing an advanced degree in neurobiology.

But at the same time, Bialik nurtured her talent for acting and shortly after finishing her PhD she jumped at the opportunity to participate in a casting call for “The Big Bang Theory,” a comedy sitcom that follows the lives of a group of quirky scientists and their friends. On her acting resume, she craftily tucked her PhD in neurobiology under “miscellaneous.” She was hired and cast as Dr. Amy Farrah Fowler, the show’s token neuro-geek, shortly thereafter.

Despite her celebrated (and likely all-consuming) acting career, Bialik says that she still thinks like a scientist—and that her scientific mind, influenced by her appreciation for comedy, theater, and art, is one of her favorite aspects of her complex personality. “Looking at the sunset, I love that my brain goes to color, wavelength, rotation of the earth, why the horizon disappears…that’s just how I see the world, and I love it,” she says.

“It’s like being in love with every aspect of the universe.”