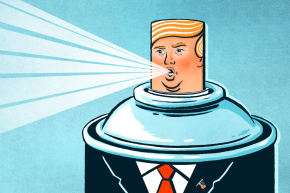 Why Trump uses hairspray to appeal to climate change deniers 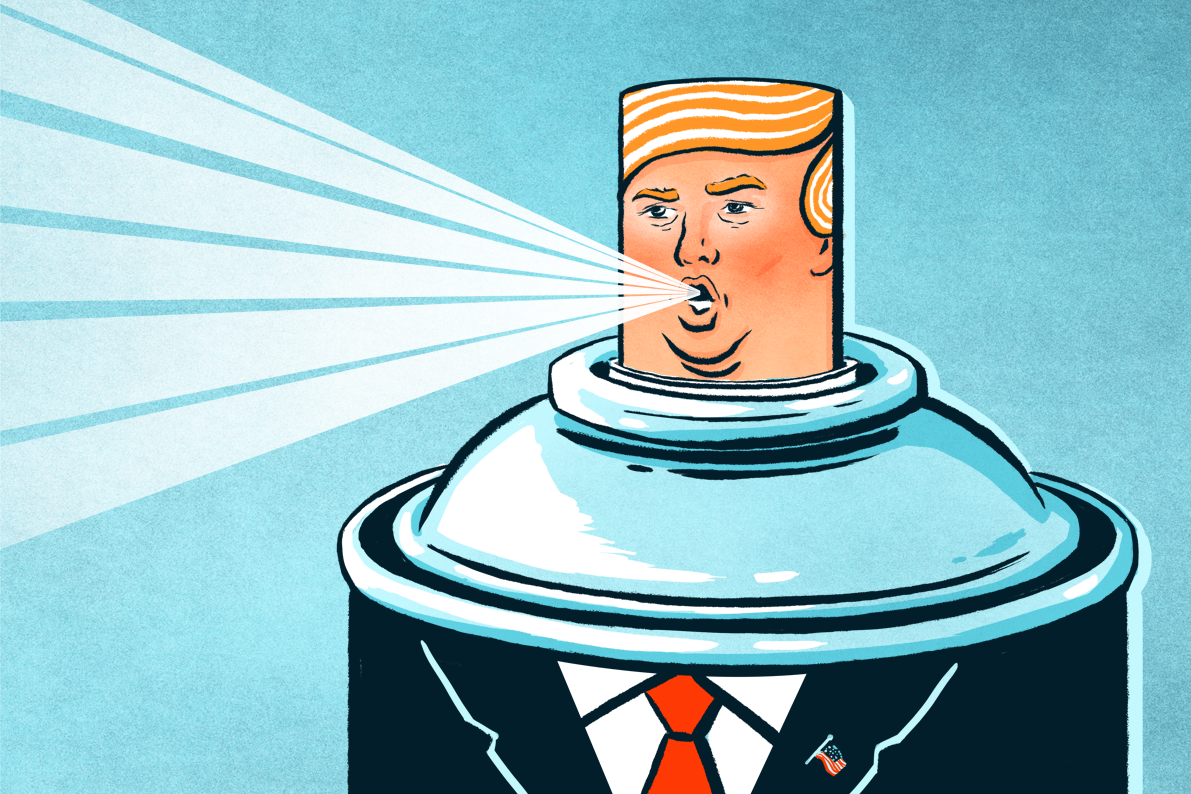 At a West Virginia coal miner rally this weekend, Donald Trump lamented the good-old days when hairspray canisters were filled with ozone-depleting chemicals that better cemented his cantaloupe-tinted coiffure into place.

After Trump briefly tried on a hard hat and pretended to dig coal, he asked the crowd of manual laborers about his signature mane. “My hair look okay? Got a little spray—give me a little spray,” he said to cheers. “You know, you’re not allowed to use hairspray anymore because if affects the ozone. You know that, right? I said ‘You mean to tell me’—’cause you know hairspray’s not like it used to be, it used to be real good… But no, in the old days, you put the hairspray on, it was good. Today, you put the hairspray on, it’s good for 12 minutes, right?”

“I said, ‘Wait a minute—so if I take hairspray and if I spray it in my apartment, which is all sealed, you’re telling me that affects the ozone layer?’ I say, ‘No way, folks. No way.'”

It’s one of Trump’s go-to stories. He’s said it time and time again and it draws roaring laughter every time. But just like many of his favorite yarns (thousands of Muslim Americans rejoicing on 9/11, U.S. Gen. John Pershing executing Muslims with bullets drenched in pig blood, etc) the claims he makes in his hairspray story are false.

Trump has been telling this tall tale publicly for at least five years. At a speech during the 2011 National Achievers Congress in Sydney, Australia, Trump pandered to attendees by praising Australian hairspray:

This hairspray actually works. Because you know in the United States hairspray doesn’t work. You know why? Because we’re destroying the ozone every time you spray. They say if I’m in my bathroom in Trump Tower, sealed with concrete, right? Eight-inch concrete floors, eight-inch concrete walls. I spray my hair. Zip-zip [pantomimes spraying hair]. They tell me I’m destroying the ozone that’s 400 miles up in the air. So they went out and got me some frickin’ Australian hairspray. I tell you, it was great.

Last December, at a campaign rally in South Carolina, Trump called out Obama’s hypocrisy for flying in Air Force One despite expressing concern for damaging the environment:

You can’t use hairspray because hairspray is going to affect the ozone. I’m trying to figure out. Let’s see, I’m in my room in New York City and I want to put a little spray so I can [pantomimes spraying hair], right? But here where they don’t want me to use hairspray, they want me to use the pump. Because the other one, which I really like better than going bing, bing, bing [pantomimes spraying hair]. They say, ‘Don’t use hairspray—it’s bad for the ozone.’ So I’m sitting in this concealed (sic) apartment … you know I really do live in a very nice apartment, right? But it’s sealed. It’s beautiful. I don’t think anything gets out.

Trump probably rehashes this story so often because it plays out perfectly every time. In one sound bite Trump can achieve many objectives at once: charming the audience, bragging about his wealth, reclaiming the conversation about his oft-mocked hair and appealing to climate change deniers.

The U.S. began regulating aerosol sprays in the 1970s after scientists Mario J. Molina and F. Sherwood Rowland determined that the ingredients, chlorofluorocarbons (CFCs) posed a threat to the ozone layer. In 1985, more research into the connection between CFCs and the ozone layer helped a team of British scientists find a hole in the ozone layer above Antartica. The public fallout from this discovery led to the 1987 Montreal Protocol, a sweeping international environmental treaty that was negotiated and implemented by President Ronald Reagan. As a part of the agreement, United Nation countries and the European Union had to freeze and later reduce use of CFCs. Every developed country in the Montreal Protocol phased out CFC use by 1995.

(Interestingly, Australia is part of this agreement, so Trump’s love of Australian hairspray is not in fact due to all the CFCs it contains.)

That is, unless President Trump finds a way to kill the agreement so that his hair can return to 1980 levels.