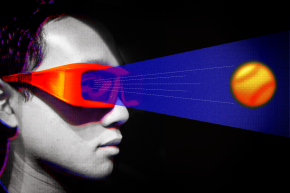 Vitamins, 3-D glasses, and strobes are among the tools athletes are using to see better, but does it really work? 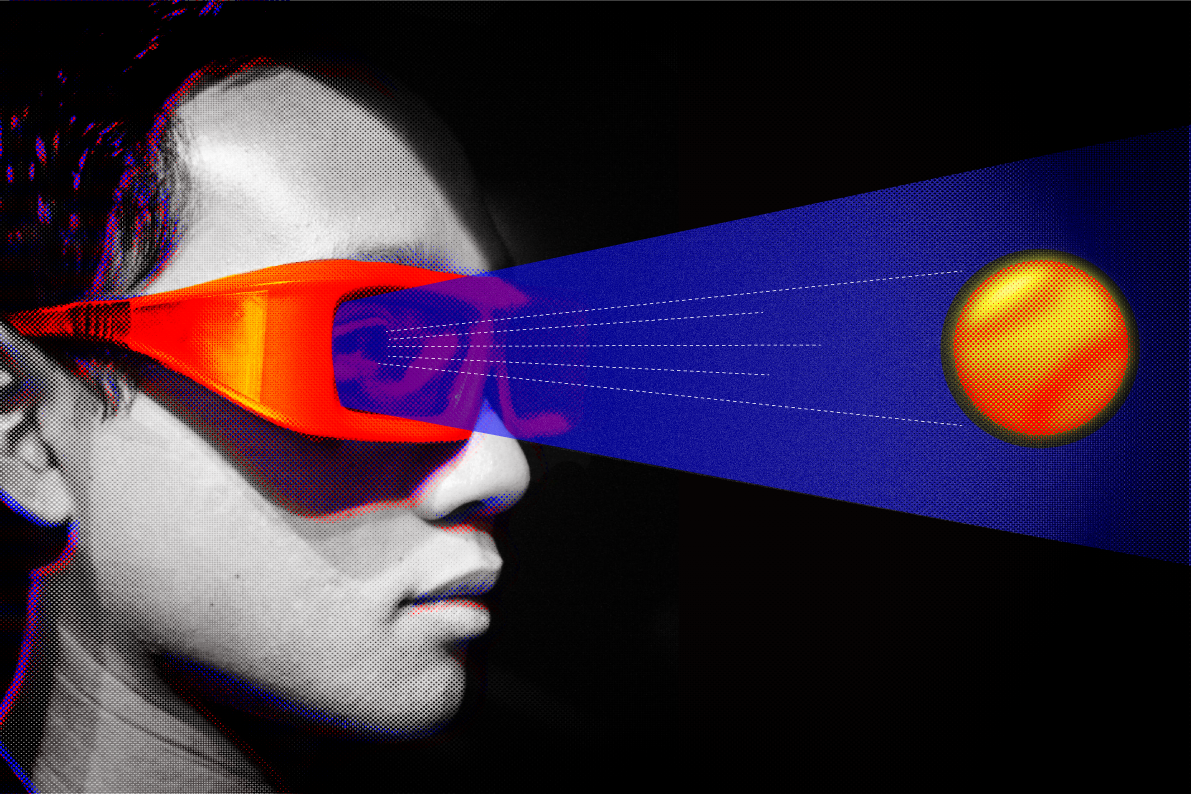 Through the 3-D glasses, the red triangle and blue square just won’t line up. Even when the shapes appear to overlap, the vision training program assures me they did not.  One eye perceives the triangle and the other perceives the square and, despite my best efforts with the keyboard arrows, I can’t find their concentric meeting point.

My visual alignment is deemed “fair,” but the descriptive text sounds clinically severe. My score “represents a moderate binocular eye muscle imbalance. The aiming of the eyes is inaccurate.” Basically, my eyes are misaligned after the target, which will result in perpetually late swings.

The evaluation of my eyes’ convergence—the ability to focus on objects in the foreground—is much worse. The test involves staring at a magic-eye stereogram, which I have never been able to do and can’t do now. The program tells me my eyes’ convergence is “extremely limited.”

There’s no putting rose- (and cyan-) colored glasses on this result: my overall vision score put me in the 5th percentile. I will never be a major league hitter.

This is essentially the verdict of Vizual Edge, the patented computer visual performance assessment developed by Dr. Barry Seiller, a Chicago-area ophthalmologist, and in use by 10 major league clubs—whose identities he won’t divulge—from which he’s assembled a database of nearly 40,000 players and prospects to help project performance.

“We’re sort of a secret weapon,” Seiller said. “They find the information that we supply to them extremely interesting and predictable, particularly when they’re going ahead and drafting athletes.”

The tool isn’t just evaluative, but developmental. After a week of conducting training exercises, my second evaluation shows marked improvement—to the 20th percentile—with the program’s proprietary formula spewing out a score befitting a high school player (which, incidentally, is where my baseball career petered out).

For those near the top (or at least the middle), hope remains. Contact lenses and LASIK are but the first steps of eyesight improvement. Hitters trying to track the spin, speed, and course of a pitch are increasingly resorting to new methods of keeping pace: 3-D training programs, liquid-crystal strobe glasses, beaded Brock strings, patterned pendulums, vision-enhancing vitamins, and even virtual and augmented reality headsets.

A former player once thanked Seiller and Kathy Puchalski, the company’s vice president and co-developer, for helping him see the ball out of a pitcher’s hand so much sooner.

“We didn’t change his eyesight,” Puchalski said. “We work on the quality of his visual information and how you see things and can react on field.”

That’s the first lesson to learn about sports vision. The realm of sight extends well beyond the lines below the E on an eye doctor’s wall.

“Most people think that perfect vision is 20-20,” said Dr. Fred Edmunds, an optometrist and the proprietor of XtremeSight sports vision clinics in Rochester, N.Y. “Well, 20-20 essentially just [refers to] a person sitting or standing still looking at a small black letter on a white chart—essentially, it’s optical resolution. Not much more than that. It doesn’t give you information, at all, about performance.”

That static eyesight measured with a 20-something proportion is visual acuity and but one of the important aspects of vision. Retired major league slugger Russell Branyan gave an example: if you look at a spinning ceiling fan and try to track one particular blade, the task gets harder as the fan whirls faster. Vision training, he said, “helps your eyes focus, pinpoint, and really lock in.

“I always had great eyesight, but I always had trouble tracking the ball,” said Branyan, who is left-eye dominant and who opened his lefty batting stance to see better. “For me, it was always a struggle. Sometimes my left eye would take over, but my eyes didn’t work together. I would actually see the ball in a different spot than where the ball actually was.”

Branyan, who hit 194 home runs in a 14-year career, was first exposed to Seiller’s Vizual Edge in the Cleveland Indians’ organization and became a devotee, using the program through its generations as a CD-ROM, web program, and tablet app. Its increasing portability made it easy for him to log a few minutes at home or in hotels. When teammates initially saw his 3-D glasses, they’d scoff and joke about him playing video games—only for them to try vision training after Branyan went on a hot streak.

A study of 352 minor league players from the 2013 season conducted by Frank Spaniol, sports science professor at Texas A&M University-Corpus Christi, indicated that players whose Vizual Edge scores were in the top quartile had batting averages that were 15 points higher, strikeout rates that were 32 points lower, and on-base percentages that were 51 points better. A much smaller study involving 18 players from that school’s baseball team in 2007 suggested that the players who trained with Vizual Edge “produced significantly higher batted-ball velocities,” and better exit velocities correlate strongly with improved performance.

“I definitely thought it was helpful,” said Yankees third baseman Chase Headley, who previously trained with Vizual Edge for years after being introduced to it while in college. “It’s one of those things, it’s hard to quantify. You certainly get better at the program and see results within the program. How much that translates to the field is really hard to say, but I’m a believer.”

Though Headley endorses the program, he raises a key sticking point in off-field training programs, particularly one utilizing 3-D technology, and that is transference. Proving an “if A, then B” statement is hard in a sport with a myriad of variables, so others prefer to minimize the distance between training and reality.

Edmunds, chair of the American Optometric Association’s sports vision section, counts one MLB team as a client and, with their minor leaguers, he uses such contraptions as numbered and lettered balls hanging from the ceiling that swing side to side and around the head with the athlete calling out visible figures; or a 10-foot Brock string that mimics the trajectory of the ball, with interspersed beads that hitters alternately focus on to learn the pathway of the pitch (“visual perceptive memory,” Edmunds said, likening it to muscle memory); or strobe specs whose shutter briefly blinds the athlete in the midst of an athletic task.

“You’re interrupting this stream of visual information and this forces the brain to work harder to perceive and use this transitory perception,” he said. “It’s like running with ankle weights.”

Developments in the field of knowledge have helped target the eyes at the cellular level. Dr. Khizer Khaderi, who was director of both U.C.-Davis’ neuro-ophthalmology service and sports vision lab until December, has long had an interest in quantifying psychometrics, the measurement of sensory perception. He worked with the University of Arizona’s highly ranked baseball team during his residency there a decade ago and was surprised to learn which retinal ganglion cells—the neurons connecting the eye to the brain—were most responsible for hitting a baseball.

He developed a video game with a home-run derby contest that, using a patented algorithm, engaged the visual cones that stimulated the parvocellular retinal ganglion cells. The game helped improve on-field performance by 22 percent, Khaderi said, but the company didn’t get much traction a decade ago. “We were just too early,” he said.

Khaderi has since consulted for several professional sports teams—including the Chicago White Sox, Boston Celtics, and San Francisco 49ers—and found the players now to be much more receptive. He left his academic post to focus on start-up technology in the space and founded the company Vizzario.

“Athletes are very interested,” Khaderi said. “Part of it’s cultural, right? Technology is now more pervasive in our lives, the way we communicate, the way we entertain ourselves.”

Neil Walker, who joined the New York Mets this winter after seven seasons with the Pittsburgh Pirates, sparingly used a Pittsburgh eye doctor’s computer program, then became more serious when doing offseason work at the IMG Academy in Bradenton, Fla. He and teammates Andrew McCutchen and Pedro Alvarez all found vision training valuable and convinced the Pirates to get a Brock string and a 3’ by 3’ vision board that that lights up to test peripheral vision and reaction time.

Walker doesn’t believe vision is emphasized enough in baseball. He reached into his locker and pulled out a box of supplements that he takes daily, an hour before each game, to help his vision. (Edmunds said the timing of the vitamin doesn’t matter, as the benefit arises from a long-term build-up of the substances.) The key ingredients are lutein and zeaxanthin; there is a lot of evidence that they reduce the risk of age-related macular degeneration, and there’s some journal research to suggest they can enhance vision in healthy adults, too. The pills are NSF-certified—meaning they are guaranteed not to contain any banned substances that would violate a sport’s drug policy—and made by EyePromise. (Oddly, they are also called Vizual Edge, the same name as Seiller’s computer program with the same stylized spelling of “visual.”)

“It reduces glare, light sensitivity, dry eyes,” Walker said. “It’s helped me more in day games more than anything. You’re not squinting so much when the sun’s out.”

Not every player has bought in. Reds first baseman Joey Votto, as skilled and motivated a pure hitter as anyone in the majors, said that he’s never been curious to try. Mets outfielder Curtis Granderson, a three-time All-Star, is another veteran who said he’s not interested. Others go through the motions when it’s mandated in the minor leagues.

“I didn’t really do it consistently enough to get results or feel like that helped me,” Mets catcher Kevin Plawecki said. “It was one of those things where it was always kind of like, we had to do it so we just did it.”

Those working in the sports vision field are, like early converts of any discipline, zealous in their faith in its benefits. Preliminary research supports their work, and they are optimistic more corroboration is forthcoming as more experts get involved.

“There’s not a lot of [research],” Edmunds said. “There’s enough to be convincing if you have an open mind.”

Khaderi called Seiller and his peers the “pioneers” and said the current offerings for sports vision are only the beginning. He rattled off a few start-ups, including the Facebook-owned Oculus and the secretive Magic Leap (for which he is a medical advisor), that he said could “change the way we view our world.” A baseball-centric virtual reality company with the backing of former player Jason Giambi and former Rockies general manager Dan O’Dowd, Eon Sports, has already launched and is in use by the Tampa Bay Rays.

“The science behind a lot of these still need to be vetted out, don’t get me wrong,” Khaderi said, “but what excites me is how we can leverage a lot of these technologies—virtual reality, augmented reality—in ways that can really take sports and vision performance almost to levels we haven’t seen.”