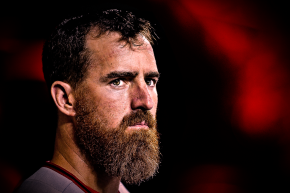 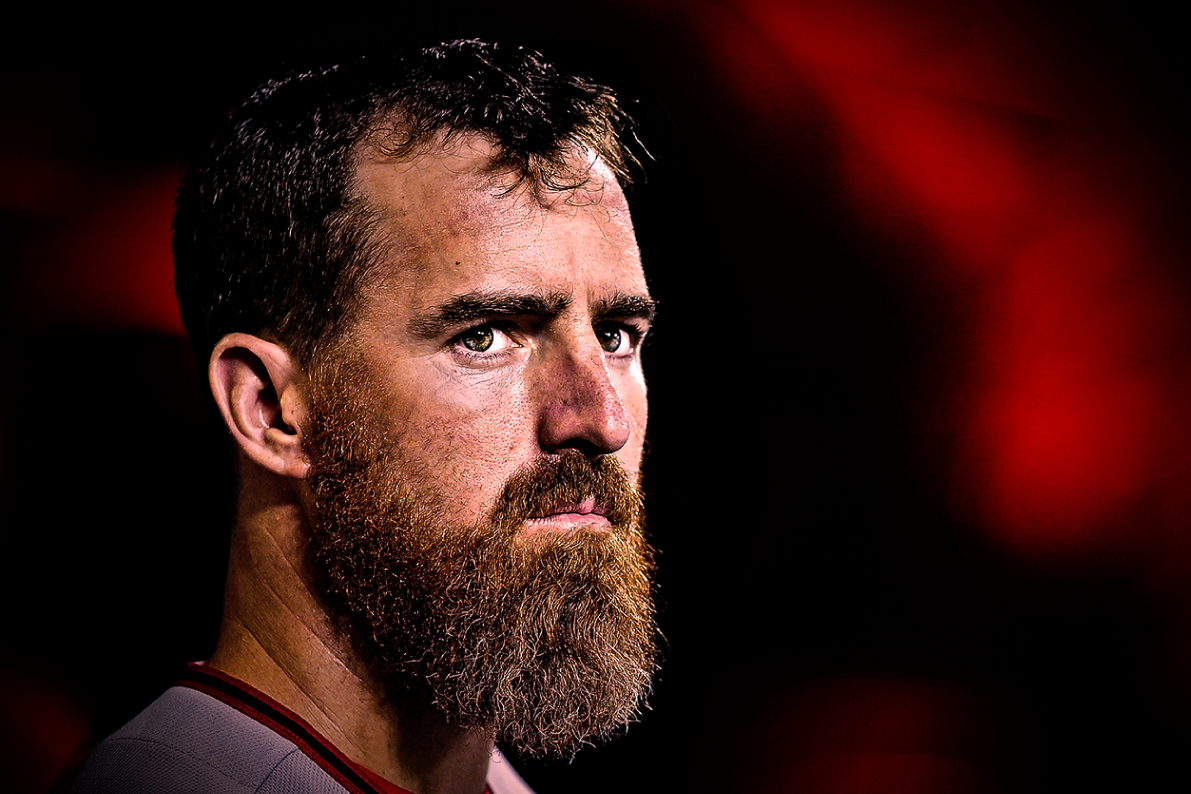 If you recall, LaRoche shockingly retired before the start of the 2016 season, walking away from a cool $13 million because of a dispute with the Chicago White Sox over the amount of time his 14-year old son, Drake, was allowed to spend hanging around the clubhouse.

At which point, things went totally haywire. Though there were unnamed dissenters, a large contingent of vocal Sox backed LaRoche. Williams was read the riot act during a team meeting, with grumbling threats of a one game boycott flying fast and loose. Pitcher Chris Sale, who seemed particularly enraged by all of this, called Williams a liar and honored the recently departed by hanging up matching father and son jerseys.

Of course, Drake and Adam had their hot little moment in the social media sun, with a fake GoFundMe page set up to cover the family’s lost wages and the #FamilyFirst flag proudly carried by current and former stars Bryce Harper and Chipper Jones.

More Ted Cruz Knows Nothing About Sports, Tries To Pander To Sports Fans

After the initial Internet furor cooled down, LaRoche laid low for a bit before finding a friendly landing spot at ESPN, where he unpacked the rationale behind his retirement. However, buried in the long, fawning profile—which includes LaRoche’s bow hunting adventures with a “Duck Dynasty” cast member and arguments in favor of home schooling—was this tidbit: for 10 days in November, LaRoche and the Milwaukee Brewers’ Blaine Boyer went on a cloak-and-dagger operation, posing as sex tourists and visiting somewhere close to 50 brothels in Southeast Asia as part of a mission to help rescue trafficked women and underage girls.

“Working through a nonprofit called the Exodus Road,” ESPN’s Tim Keown wrote, “LaRoche and Boyer conducted surveillance in brothels and tried to determine the age of the girls—known only by numbers pinned to bikinis—and identify their bosses.”

Vocativ spoke with Matt Parker, the co-founder and CEO of Exodus Road, who explained that he’d met Boyer a few years ago after a chaplain for the Arizona Diamondbacks invited him to speak during spring training. Boyer roped in LaRoche and, after years of conversations about Exodus Road’s mission and goals, they joined up.

As far as LaRoche’s preparation for this work goes, Parker said that their “intense training process” consists of “an FBI background check, a psychological evaluation, a proper application, a phone interview, an in-person interview, and then after you pass those steps you deploy to the country we’re operating.”

Once abroad, LaRoche and Boyer then spent two days participating in an “intensive skills training course,” but it’s not what you might think

“A lot of what we do is blend,” Parker said. “We blend into an environment where people are bought and sold on a regular basis … the majority of people who first hear about volunteers or investigators going into some of these dark corners of the world to do the missions, I think they think that it’s all military action and they have to be able to be Jason Bourne and kick somebody’s teeth in.”

But it seems that LaRoche is looking for just that—a more heroic brand of rescue. On Monday, retired pitcher Dan Haren tweeted this:

Had dinner with @e3laroche last night. He's on his way to Mexico to bust drug dealers.. #America…..And no, Drake isn't going.

Haren explained via Twitter direct message that the drug dealers line was a joke, but, according to Haren, LaRoche said he’s working with yet another rescue organization based in Salt Lake City, though he couldn’t immediately recall which, and is on his way to Mexico “to break up a group of pedophiles that are exploiting kids.” When asked if the organization Operation Underground Railroad rang a bell, Haren replied, “Yes.”

OUR would represent a significant step up for LaRoche in terms of anti-trafficking partners. Their snazzy online brochure is replete with photos of founder Tim Ballard, looking appropriately grizzled and grim while clutching adorable brown children, as well as a few shots of beefy, all white ex-Navy seals.

Though they still lag behind the industry leader, International Justice Mission, in the most recent fiscal year, OUR topped $3.4 million dollars in income, and they’re sitting on an additional $2.1 million in cash assets. The organization has been lavishly praised by Glenn Beck, who has asked his followers to fork over whatever dollars they haven’t spent on gold and survival seeds to them.

Ballard, like Beck, is a devout Mormon, and literally believes he’s on a mission from God. Further, in a Foreign Policy investigation into OUR’s activities in the Dominican Republic and Mexico, Ballard said that if someone isn’t “comfortable praying, they’re not going to be comfortable working with us.” Given LaRoche’s overt religiosity—in the ESPN article, Boyer said “Adam and I truly believe God brought us there,”—it’s not surprising Ballard’s zeal might appeal to him.

There’s even a movie and TV series about OUR called “The Abolitionists” on its way, produced by Gerald R. Molen. Molen is described by OUR as “the producer of Schindler’s List,” leaving out the fact that he’s also the man behind the entirety of Dinesh D’Souza’s cinematic oeuvre.

Both OUR and Adam LaRoche did not respond to numerous requests for comment, but Vocativ spoke with Anne Elizabeth Moore, the author of the upcoming book “Threadbare: Clothes, Sex, and Trafficking” and an investigative reporter who has covered anti-human trafficking NGOs for Truthout.

Moore explained that when it comes to anti-trafficking groups, the quasi-paramilitary front put forth by OUR is very much the norm for the rescue industry.

“These organizations are all of a piece: white burly dudes, often ex-police or FBI (so it’s nice they got a sports guy in there to switch it up again, sarcasm emoji),” Moore said via email, “who get to live out some fantasy of breaking into some exotic locale and stealing away underage brown women for their own purposes, which used to be called rape before that term came to exclusively mean bodily violations of a sexual nature.”

That sentiment was echoed by Aziza Ahmed, an associate professor of law at Northeastern University School of Law who has written extensively about human trafficking.

“For any organization that’s rescuing women or girls and then handing them over to the police just because they’ve now been rescued and some perpetrators have been caught, it sounds really exciting,” she said, “but the reality is that in a lot of developing countries and even in the United States, we don’t really have the resources or the capacity to address the needs of these women and girls. “

Ahmed explained that unless there’s direct access to social services, heath services, food assistance, housing, job training, and more, “there’s no reason why that person wouldn’t be either vulnerable to being trafficked again or desire to return to the sex industry.”

“Some people think, ‘we’ve just got to go find them and rescue them,’ and that that is the hard part of the equation, and it isn’t,” John Vanek, an anti-human trafficking consultant and the author of “The Essential Abolitionist,” said when reached by phone. “In the grand scheme of assisting victims of human trafficking, that’s just the beginning.”

“What these organizations don’t do, then, is anything whatsoever to address the real problem of human trafficking,” Moore said, “in which sex trafficking only plays a tiny, tiny part worldwide and from which individuals cannot be permanently ‘rescued’ without enacting national, long-term poverty-elimination policies which merit no mention on either [OUR or Exodus Road]’s site … the strategy is so wrong-headed, I’d be shocked if anyone involved knew anything at all about what is involved in human trafficking or how to eliminate it.”

In response to the criticisms of the rescue industry, though Parker vigorously defended his expertise and organization’s track record, he did agree with one aspect. “This is a complex global justice issue,” he said. “It’s going to take many, many organizations working in collaboration to get this job done.”

Parker concurred that both prevention and aftercare were absolutely vital to combat trafficking, but Exodus Road’s focus remains on “intervention.”

“It’s finding and freeing victims by supporting law enforcement,” he said, summarizing Exodus Road’s mission statement. Parker also added that they did have a newly installed tracking system in place. “We have a partnership with Salesforce who customized a database to track traffickers, victims, establishments we’ve investigated, and all the activity our investigators do, and it’s a very robust system.”

Moore stressed, though, that many rescue non-profits are able to rope in significant private and governmental funding and exposure specifically because of the sensationalistic aspects of their work, which, in addition to LaRoche, has attracted a score of celebrity advocates in recent years.

“The big-picture question here is, have we found any effective means to combat human trafficking in any area of the globe, such that women are no longer in poverty?” Moore asked. “Well, no. And the rescue industry, by diverting that funding and obscuring the real problems of human trafficking, is making it worse, even if a handful of women are receiving the services they were promised and require.”