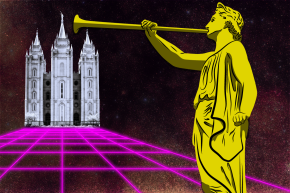 Queerstake is a rogue techno-utopian, tolerant branch of the Church of Jesus Christ of Latter-day Saints 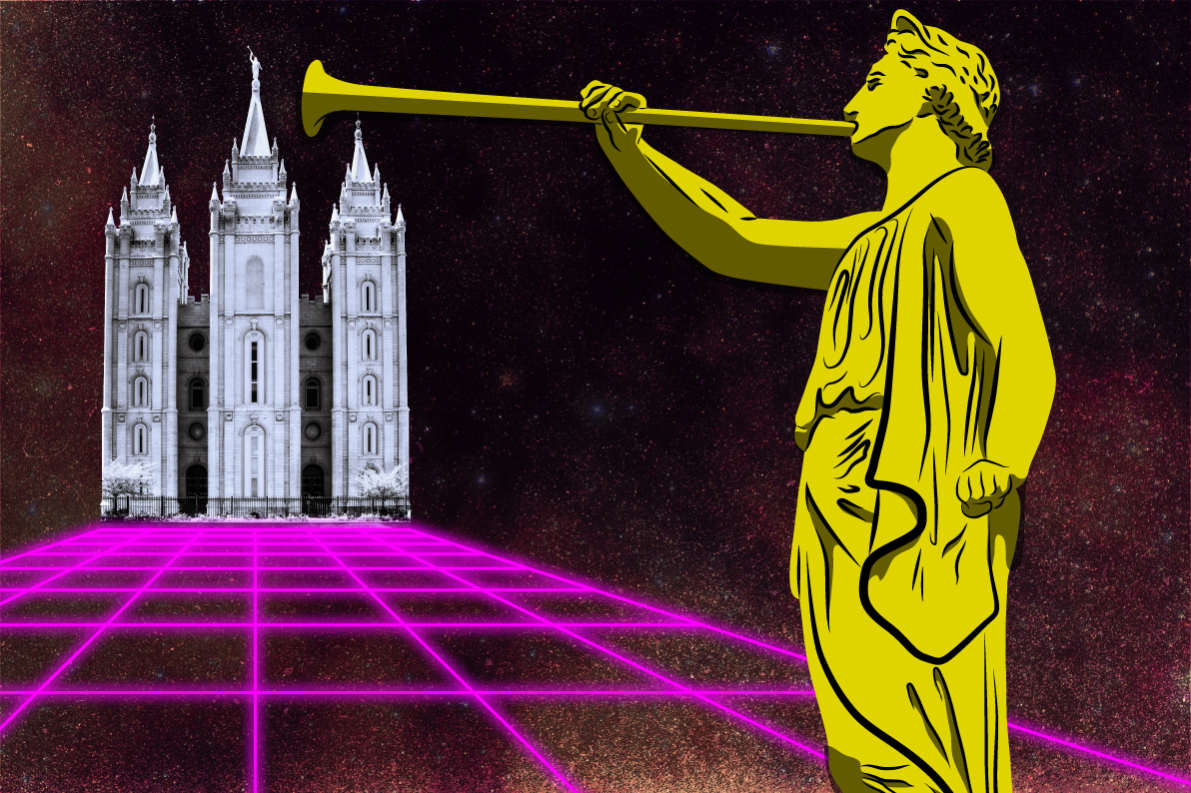 Kris Irvin has known since she was four that her male spirit got mixed up on the way to her female mortal body. But Irvin grew up in a conservative family embedded in a community that lives by the teachings of the Church of Jesus Christ of Latter-day Saints (LDS), a religion that enforces strict gender roles, punishes homosexuality, and says virtually nothing about being transgender.

Irvin didn’t even know until she was a teenager that it took both a man and a woman to have a baby. Finding a family member or faith leader who could help her understand her gender identity was impossible. She tried, of course. A Sunday school teacher told her spirits never go to the wrong body; her mother told her to ignore her peculiar feelings just like an alcoholic must ignore the bottle; and her husband, whom she married at 20, tuned her out whenever she tried to tell him why she used to pretend to be a boy in Star Wars chat rooms.

Then at the age of 29, she finally met people who could help her. “Last June, I found Tumblr,” Irvin said. “And Tumblr taught me there is such thing as transgender and that it’s OK. And it’s OK for an assigned female at birth to identify with the male gender.” (Irvin asked to be referred to by female pronouns in this article.)

Irvin had discovered an online community of LGBT Mormons known as Queerstake. In the last ten months, members of Queerstake have helped her understand her identity and how that person fit into the Mormon faith. “I didn’t know that there were other Mormons that identify as transgender,” Irvin said. “When you have these questions, people on Tumblr will answer and lend support if you’re feeling really dysphoric. Lots of times I have doctrinal questions so I’ll post and somebody will come up with this amazing answer and I’m like, ‘Wow, I just learned 18 things. Thank you.'”

For Irvin, and about 70 other participating members, Queerstake has become more than just a support group—it’s an online temple that is accepting to all people who who are struggling with faith and sexuality.

The term “queerstake” was first introduced on Tumblr, a microblogging site, in April of 2015 by Understanding Same-Gender Attraction (USGA), an unofficial organization at Brigham Young University, a private university operated by the LDS Church. USGA had produced a video titled #INeedHimToo about Mormons who were gay but still spiritual. The club shared the video on Tumblr with the hashtag #queerstake. For a few years, Mormon Tumblr users had been connecting through the tag #tumblrstake, a play on the LDS term “stake,” which refers to a collection of congregations. But once “queerstake” entered the lexicon, LGBT Mormons on Tumblr had a pride flag to pin on their grievances, jokes, and affirmations so that others like them could see.

By summer, Queerstake had evolved from an assortment of posts into a virtual congregation, opening its doors to the befuddled masses who didn’t know if they still belonged in the LDS Church. “When I saw and read about active queer members in the church, it gave me hope,” said she-is-well-dodgy a 25-year-old Netherlander who identifies as gender-fluid, pan-romantic, and asexual. “There were actual, live people out there who were dealing with similar issues as I was.”

Stephen O’Leary, a professor at the University of South California who has spent the last three decades studying how the internet influences the evolution of religions’ stances on sexual morality, believes that Queerstake provides a glimpse of how the LDS Church will handle gay and trans membership in the future. “Before you had these international free-for-all forums of the internet, LGBT Mormons were isolated and every individual could be made to feel like a freak or an outcast,” O’Leary said. “And now … people come out of the woodwork and they seem normalized and they gain the courage to stand up and say, ‘We’re here, we’re queer, and we’re Mormon. Get used to it.'”

Mormonism is not alone as a religion in viewing homosexuality as sinful, but while many faith groups are becoming more accepting, the Mormon Church is actively moving in the opposite direction. On November 5 of last year the LDS Church officially abandoned every member involved in a same-sex marriage as well as the children of those marriages. A new policy deemed those in gay unions as apostates and barred their kids from joining the church until they turn 18, leave their parents’ home, and disavow their parents’ relationship.

The new guidelines became national news, inspiring outrage within the Mormon community. A week later, about 1,500 Mormons gathered across the street from the Salt Lake City LDS temple and resigned from the church with the help of lawyers and notaries. In the ensuing months, thousands more have left the church.

“Our community went through considerable trauma as a result of the policy change,” said John Gustav-Wrathall, president of Affirmation, the largest support group for LGBT and same-sex attraction Mormons (the latter identifier is more acceptable to the LDS Church). “I don’t know anybody who didn’t, in some way or another, experience varying degrees of shock, hurt, disappointment, confusion.”

Since the policy change, a group for mothers of LGBT Mormons called Mama Dragons has documented more than 40 cases of suicides within that group. “[Among my patients] I had an increase in reports of suicidal thoughts and ideation once the policy change came out,” said Hollie Hancock, one of the founding members of Mama Dragons and a clinical mental health counselor based in an area of Utah that is predominately Mormon. “Unfortunately, I did have an increase in suicide attempts that were not fatal. It really rocked this community to its core here in Utah.”

What makes the new rules especially painful for some is that policy changes aren’t just revisions to the handbook of church policies—they’re revelations from the council of twelve appointed prophets who govern the church. That means the church leaders are actively adding to the religion’s anti-gay dogma, rather than just clarifying what already exists.

This new divine revelation goes against a doctrine of love and acceptance that comforted many LGBT members who struggle with their identity. “Growing up in the church you hear, ‘Jesus loves everyone. Love one another,'” Hancock said. But then the policy change revealed a new exclusionary clause. “To me, that [new policy] does not seem very loving, and it flies in the face of, ‘Love one another.’ I think that’s very, very damaging. Jesus said, ‘Love everyone,’ but now it’s ‘Love everyone except you.'”

For Kris Irvin, the new policy threw her into an existential crisis. She had finally figured out that she is a trans man. But she lives with a man. She wasn’t sure if that meant she was violating the new rules. “My son was just about to turn eight, which is the age of baptism in our church,” Irvin said. “And then they came out with the policy and I was like, does that mean my son can’t be baptized? It’s what he wants. It was his choice and he was super excited to be baptized.”

November was the darkest month of Irvin’s life. She was just beginning to understand her identify, but knew very little about how that person fit into the religious community that influenced every aspect of her existence. “There was about a week where I really wanted to kill myself,” Irvin said. “The only reason I didn’t was that I knew if I did, my son would find my body and I couldn’t do that to him.”

Fortunately, Irvin had an online network of dozens of LGBT Mormons to help her. “We talked through the policy and the changes and how it made us feel,” she said. “We were all just trying to support each other and it was a beautiful thing to see everybody say, ‘If you feel bad, if you need to talk, we’re here.'”

After the initial fallout from the policy change, a few dedicated Queerstake members realized that LGBT Mormons needed the comfort of the gospel now more than before the church leaders spurned them. Two twenty-somethings, Stephanie (who requested to withhold her last name for professional reasons) known online as tryingtomormon, and Mika McIntosh, aka yo-gaymormon, took on leadership roles and began building their ideal congregation—where they could worship without hiding their identities—with the inception of The Official Queerkstake Blog. McIntosh was voted the Queerkstake Elders Quorum President and Stephanie was chosen as the Relief Society president (Relief Society is an LDS philanthropic women’s organization, and the only official institution within the church that allows female leadership). It would be difficult for either of them to hold these roles in a church-sanctioned ward because Stephanie is bisexual and Mika is gay.

The modern version of Queerkstake emulates many rituals of the official LDS Church. For instance, “friend teaching,” a program that links up Queerstake members so they can share inspiring messages with each other, is a casual, gender-neutral version of the LDS practices of home teaching and visiting teaching. There are assigned members responsible for teaching Sunday school lessons, members responsible for weekly Institute lessons focused on the church’s history, and an activities committee in charge of coming up with fellowship exercises. 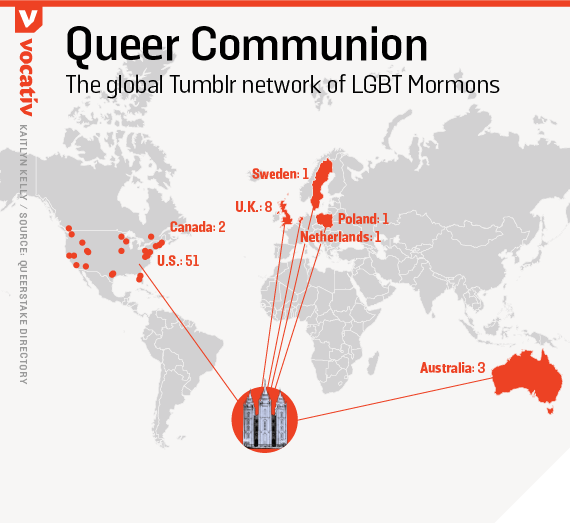 “I think it’s important that everyone has something they’re interested in. We’ve done viewing of both LGBT-related films and non-LGBT films. We have regular lessons that people give about scripture and about the church,” Stephanie said. “We’re currently in the middle of our first activity where we take a fictional character and we talk about what they would be like if they were a member.”

In the spirit of inclusiveness, they try to find a position for everyone. Kris Irvin, aka krisologie, is listed on the blog as the group’s pianist. Of course, there’s no way for Irvin to play piano for the congregation, but she does engage with Queerstakers every day.

On March 5, exactly four months after the new policy on same-sex attraction leaked, Irvin’s son was baptized. The Queerstake community helped her realize her identity couldn’t prevent her son’s baptism since the church doesn’t recognize transgender people as apostates unless they transition to a different gender.

Irvin wanted to attend the event as her true self but knew that if she wore pants her family would shame her. She compromised, and wore shorts underneath her skirt. The ceremony was one of the happiest moments of her son’s life, but Irvin was a nervous wreck. She thought her mom tried to take attention away from her son by giving a passive-aggressive testimony that seemed to target Irvin for not following the rules of the church. She even referred to Irvin by her first name, Amanda, in front of a congregation that knew her by her middle name, Kris.

Throughout the difficult day, Irvin found time to log onto Tumblr and share updates and photos of her ecstatic boy, dressed in a unisex white baptismal suit.