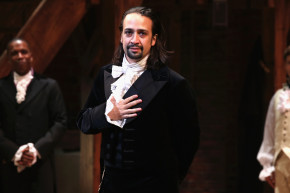 Everyone’s dying to see Hamilton on Broadway—but after you shell out enough to nab a ticket, Instagramming a Playbill from the show used to be enough. But no more. In these days of peak-Hamilton, a shot of Alexander Hamilton’s headstone at Trinity Churchyard in Lower Manhattan is required to cement your status as a die-hard devotee.

So just how much of a phenomenon is this? During the week of April 27, a Vocativ analysis of Instagram posts showed that 74 people snapped pics at Hamilton’s final resting place, comprising almost half of the photos taken at the cemetery during that period. A photo of his striking tombstone was definitely the shot of choice, unsurprisingly captioned with popular lyrics from the show.

Last night we saw the show, this morning we are paying homage. #Hamilton #trinitychurch #hamiltonmusical #10dollarfoundingfather #brownsontheroad A photo posted by Courtney Brown (@courtneybrown2282) on Apr 24, 2016 at 12:00pm PDT

Alexander Hamilton is definitely having his moment. So many people are here! #whotellsyourstory #downtown #trinitychurch #hamilton #nyc @hamiltonmusical A photo posted by ajames08 (@ajames08) on Apr 23, 2016 at 2:39pm PDT

Lynn Goswick, a spokesperson for Trinity Church, told Vocativ that they have seen an increase in the number of visitors. Tourists regularly flock to the cemetery, which is near the World Trade Center memorial, but Goswick says the interests of the visitors has shifted since the musical skyrocketed to fame:

“Before, most visitors stopped at Hamilton’s monument, but now they also ask specifically for the location of the graves of others mentioned in the musical—Philip Hamilton, Angelica Schuyler Church, and Hercules Mulligan.”

Best of wives and best of women. #Eliza #ElizabethHamilton #TrinityChurch

Goswick was also quick to point out another trend, pointing out that “visitors now leave tokens of remembrance—flowers, stones, coins—at Hamilton’s monument and on Eliza’s stone just in front of it.”

Lin-Manuel Miranda himself, creator and star of the megahit, dropped by for a visit on Friday with a PBS documentary crew. Naturally, several fans snapped him paying his respects. One even got a retweet from Miranda who added, “Ahhhh ya caught me.” Talk about winning the Hamilton lottery.

Ahhhh ya caught me. https://t.co/7woJGNr5OA