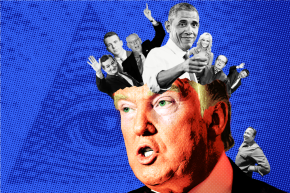 How Trump’s Love Of Internet Conspiracy Theories Fueled His Rise

From birtherism to Cruz's connection to Lee Harvey Oswald 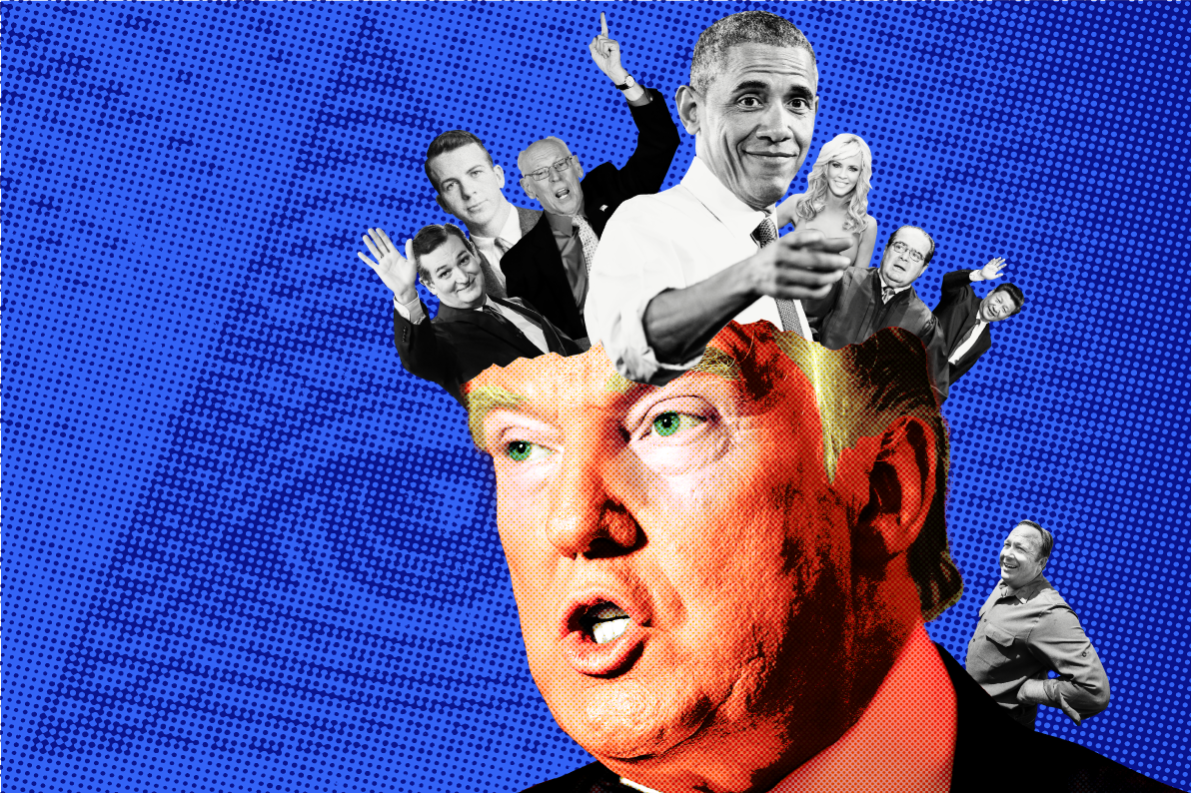 Donald Trump set the stage for his presidential run six years ago with a conspiracy theory dredged up from the worst corners of the web—and he sealed his Republican nomination for president Tuesday night just hours after entertaining another: that Ted Cruz’s father was involved in the murder of John F. Kennedy.

On the morning of the Indiana primary, Trump tried to discredit remarks made by his opponent’s father, Rafael Cruz, in classic Trump fashion—by referencing a National Enquirer story claiming Rafael Cruz was photographed with JFK assassin Lee Harvey Oswald.

“His father was with Lee Harvey Oswald prior to Oswald’s being—you know, shot. I mean, the whole thing is ridiculous,” Trump said on Fox News. “What is this, right prior to his being shot, and nobody even brings it up. They don’t even talk about that. That was reported, and nobody talks about it.”

The story was bogus. But that didn’t matter. Trump’s statement helped ensure he got most the media coverage on a crucial voting day and it only galvanized his most ardent and anti-establishment voters. It’s a technique that Trump has been perfecting for years.

Trump teased a presidential campaign in March 2011 in an interview with Good Morning America. He had announced plans to run twice before, but this instance was different because of his guarantee of sincerity and because he seemed to have a new strategy for implementing an important lesson from his 1987 bestseller The Art of the Deal: “The point is that if you are a little different, or a little outrageous, of if you do things that are bold or controversial, the press is going to write about you.”

Trump had been bold and controversial before but no sensational statement had ever earned him as much press as what the real estate mogul told GMA corespondent Ashley Banfield that day aboard his private 757.

“Everybody that even gives any hint of being a birther—a word you didn’t use—even a little bit of a hint, like, gee, you know, maybe just maybe—this much of a chance. They label them as an idiot. Let me tell you, I’m a really smart guy. I was a really good student at the best school in the country. The reason I have a little doubt—just a little—is because he grew up and nobody knew him…. Nobody knew who he is until later in his life. It’s very strange.”

An 'extremely credible source' has called my office and told me that @BarackObama's birth certificate is a fraud.

And just like that a bonkers notion started by Hillary Clinton supporters during the 2008 presidential primaries and only muttered by right-wing conspiracy theorists throughout Obama’s first three years in office became a full-blown media sensation. Days later, Trump appeared on The View and demanded several times that Obama show the certificate.

Around that time Trump was approached by Joseph Farah, founder and editor-in-chief of WorldNetDaily, a popular conservative site that champions many conspiracy theories including the thesis that Obama lied to the American people about his citizenship.

According to Politico, Farah spoke on the phone with Trump every day for a week guiding the tycoon on how to talk to the media about Obama’s “true” birthplace. “It’s irresistible theater, but [Trump’s] actually winning support,” Farah told Politico.

Donald Trump is here tonight. Now I know that he’s taken some flak lately. But no one is happier—no one is prouder—to put this birth certificate matter to rest than The Donald. And that’s because he can finally get back to focusing on the issues that matter: Like, did we fake the moon landing? What really happened in Roswell? And where are Biggie and Tupac?

The room erupted in laughter, but Trump just grimaced as if he knew who had really won.

How amazing, the State Health Director who verified copies of Obama’s “birth certificate” died in plane crash today. All others lived

Of course, Trump didn’t end up running that year. But four years later, he launched a genuine presidential campaign—one that has been fueled largely by conspiracy theories.

Healthy young child goes to doctor, gets pumped with massive shot of many vaccines, doesn't feel good and changes – AUTISM. Many such cases!

Trump has suggested several times throughout the campagin that vaccinations cause autism. “Autism has become an epidemic. Twenty-five years ago, 35 years ago, you look at the statistics, not even close. It has gotten totally out of control,” Trump said during a debate in September. “I am totally in favor of vaccines. But I want smaller doses over a longer period of time. Same exact amount, but you take this little beautiful baby, and you pump—I mean, it looks just like it’s meant for a horse, not for a child, and we’ve had so many instances, people that work for me.”

Trump then added “Just the other day, 2 years old, 2½ years old, a child, a beautiful child went to have the vaccine, and came back, and a week later got a tremendous fever, got very, very sick, now is autistic.”

Perhaps one of Trump’s favorite conspiracy theories is that climate change was a hoax created by China. He has tweeted about it dozens of times since 2011, amping up interest since he announced his presidential campaign.

The concept of global warming was created by and for the Chinese in order to make U.S. manufacturing non-competitive.

Wrong, used to be called global warming and when that name didn't work, they deftly changed it to climate change-because it's freezing!

It's really cold outside, they are calling it a major freeze, weeks ahead of normal. Man, we could use a big fat dose of global warming!

After Justice Antonin Scalia died, Trump suggested that someone murdered him. “I just landed and I’m hearing it’s a big topic,” Trump said on conservative radio show The Savage Nation. “And it’s a horrible topic, but they say they found a pillow on his face, which is a pretty unusual place to find a pillow.”

Days later, Trump used the incident to suggest that Obama has lied about his Christianity, possibly pandering to the millions of Americans who falsely believe that Obama is a Muslim.

I wonder if President Obama would have attended the funeral of Justice Scalia if it were held in a Mosque? Very sad that he did not go!

While most other major candidates ignore conspiracies theories (When a woman at a 2008 town hall meeting told Sen. John McCain that Obama was an “Arab,” that she was scared of, McCain responded “Sen. Obama is a decent person and a person you don’t have to be scared of as president of the United States”), Trump relishes them. He retweets wild accusations against his opponents with delight, often adding his own exclamations. He sees the value of harnessing and magnifying their paranoid ravings. He’s even gone so far as to call in to conspiracy theorists’ radio shows and praise their work.

In December, Trump was interviewed by paleo-conservative Alex Jones on his radio show Inforwars three hours before Jones said that the San Bernardino shooting was a “false flag” operation orchestrated by the government.

Trump returned the praise, saying, “Your reputation is amazing. I will not let you down.”