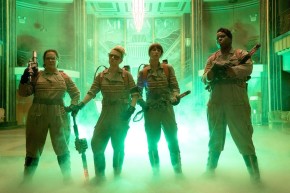 Why Is The “Ghostbusters” Trailer YouTube’s Most Hated Video?
By Leslie Horn

Why Is The “Ghostbusters” Trailer YouTube’s Most Hated Video?

Fans of the franchise may not be afraid of no ghost, but they're sure afraid of an all-female cast

The all-female fronted Ghostbusters reboot has rankled people–primarily the male nerd subset–since it first came into existence. Sony released the trailer for the upcoming movie in March, which caught even more hate from pouty internet commenters who can’t fathom the idea of four women in the lead roles. More recently, the Ghostbusters trailer stood alone as the most-downvoted trailer in YouTube history. How did we get here?

As it stands now, the trailer has 623,740 down votes, as opposed to 216,907 votes in the affirmative.  Compared to some of the worst, most reviled films of the YouTube era, the mountain of hate piled on the Ghostbusters trailer makes everything else look insignificant. ScreenCrush notes:

To put that in perspective, the Fantastic Four trailer from last year has only 20,175 dislikes. The Ridiculous Six trailer, which has an impressive 0% on Rotten Tomatoes, has only 5,803 dislikes. Could Ghostbusters be that much worse than either of those two movies? It’s seems unlikely knowing what we know about both Fantastic Four and Ridiculous Six.

To be fair, the trailer still has a ways to go before it’s the most hated YouTube video of all time. (Compare to this playlist of most-disliked YouTube videos) Justin Bieber’s “Baby” has been given a big fat thumbs down more than six million times. Rebecca Black’s “Friday” has more than two million dislikes. But the subtext is still clear.

So why do people hate the all-girl Ghostbusters so much when all they have to go on is a trailer and some on-set photos? Unreasonably, because of the whole all-girl thing. And maybe a bit more reasonably, because for all the film’s claims of being progressive and casting women in roles that had been held by men in the past, it fell back on some bad casting stereotypes. Specifically with Leslie Jones, who is the only black character, and appears to be playing the role of the sassy transit worker, while the other three ghost huntresses are scientists and academic types.

But there is more misplaced hatred that is clearly anti-woman, and that’s just what is driving the downvotes on YouTube. And those are the yells you’re hearing the loudest, and probably the people who are actively going to the trouble of going to YouTube and downvoting the thing.

More The New ‘Ghostbusters’ Isn’t As Progressive As You Think

Vocativ analyzed Twitter chatter around the trailer and found that talk of downvoting immediately followed the trailer’s March 3 release.

And, I'm back! Just had to go down vote the new #Ghostbusters trailer really quick…

I can't down vote this enough! @Ghostbusters trailer went from -30k to -42k in 2 hours lolhttps://t.co/dFWyukk5H8

"I created five YouTube accounts so I could down vote the new trailer. I will be remembered as a hero." – Ghostbusters fan

Vocativ found some active anti-Ghostbusters threads on Reddit, too. Here’s one thread that is full of a lot of comments that argue that somehow, by casting women in the starring role, the film is, uh, sexist. User Random-Miser writes [sic]:

This movie however is supposed to be a complete reboot, and a REALLY bad, horribly sexist looking one at that. Of course they have had sooo much backlash as a result they may be trying to alter it abit in order to make it somehow a sequel but either way, looks painful to watch.

And at the end of that thread, more talk about those pesky downvotes, via slayer607:

There’s yet another thread on Reddit that delves into the casting of Leslie Jones’ character that is frankly too vile to go into. But the rub is that the trailer didn’t become the most-disliked trailer on YouTube by accident. Though the hate came from the usual subjects (Redditors, the Twitter mob, YouTube commenters), it’s been building since the trailer first came out.

If you feel like this is an extreme amount of effort for less than three minutes of a movie that isn’t even out yet, you’d be correct. But when men on the internet are mad about something, you’re sure as hell going to hear about it.