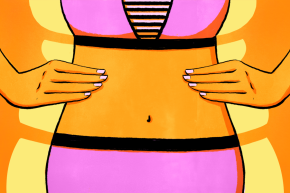 Years after competing on "The Biggest Loser," contestants' metabolisms had gotten slower

Rapid weight-loss reality television show “The Biggest Loser” has experienced its share of controversy—from accusations that the show sets unrealistic weight loss goals for viewers to allegations their practices are unsafe. But recent research has cast doubt onto the very foundation of the show, namely that it helps contestants lose weight for any appreciable amount of time.

“The Biggest Loser” is a reality show has aired on NBC for the past 12 years, pitting obese people against one another in a competition to lose the most weight. The length of each season varies, but participants typically have around 30 weeks to lose the weight, with the help of trainers and coaches. The grand prize is $250,000. Danny Cahill, the winner of the eighth season, lost the most weight of anyone to date: 214 pounds, more than half of his body weight.

A team of researchers looked at 14 competitors from the show’s eighth season that wrapped in late 2009, and the results, published today in the journal Obesity, shed some light onto just what happens in the body that causes individuals to gain weight back after jaw-dropping weight-loss transformations.

The researchers measured the participants’ metabolic rate shortly after the end of the competition, then again six years later. Thirteen of the 14 participants had gained weight by the followup. (The only person who wasn’t heavier in 2015 than they were in 2009 had undergone bariatric surgery in the intervening years, following a large weight gain.)

After the competition and again six years later, the researchers had the participants fast overnight, then collected blood samples and calculated their resting metabolic rate with proxy measurements, like how efficiently their bodies used oxygen. Those participants that kept more of the weight off had slower metabolisms than those who had gained more of it back, but their metabolisms were still much slower than the researchers would have expected based on their weight and age. In other words, all the participants had much slower metabolisms six years after the show ended than they would have if they hadn’t previously lost the weight.

The term metabolism, the process by which the body breaks down chemicals and uses them to construct its tissues, is familiar to many. Colloquially, we speak about metabolisms as being “fast” or “slow”—and the faster your metabolism, the less excess fat your body stores. The body is using food quickly to maintain the body’s processes.

Factors like sex, age, genetics, and medical conditions (like hypothyroidism) can all affect a person’s metabolic rate, but it’s not entirely due to factors outside of a person’s control.

Losing weight slows the metabolism, and it’s not hard to see why. When a person’s body burns more calories than they consume, the body adapts accordingly, sending signals to cells to slow down so that they don’t waste energy. That shift, called metabolic adaptation, makes cells work more efficiently—using fewer calories to achieve the same ends. It’s the body’s response to the perceived threat of diminishing food resources. But this adaptation not only makes it harder to continue achieving results on a weight loss regimen, it also makes a person more likely to put weight back on after the diet’s over, according to a 2014 study.

Some experts, including one of the authors of this study, have criticized the weight loss practices on the “The Biggest Loser” in the past, calling them unsustainable. “Unfortunately, many contestants are unable to find or afford adequate ongoing support with exercise doctors, psychologists, sleep specialists, and trainers—and that’s something we all need to work hard to change,” Robert Huizenga, a doctor that works on the “The Biggest Loser,” told the New York Times.

There are advantages to losing weight more slowly than the contestants on the show. Losing just a little weight at a time, about a pound a week, can help dieters limit the number of calories they consume without reducing their lean muscle mass, which can in turn help keep their metabolisms moving quickly, Eric T. Trexler, a doctoral student in human movement science at the University of North Carolina Chapel Hill who has published a study about metabolic adaptation, told Vocativ. But it would take years of diet and exercise to get results like contestants on the “The Biggest Loser.” “No matter how fast you lose weight, and no matter how extreme the diet or exercise programs are, metabolic adaptation will most likely occur with weight loss of [the television show’s] magnitude,” Trexler adds.

The study has limitations. There was no control group of obese people who had never lost so much weight, and the sample size was small.

Nevertheless, the results are convincing. “The researchers have done an excellent job with [this study],” Trexler says. “We all inherently know that losing and maintaining a large amount of weight is quite challenging, and long-term success is unfortunately uncommon.”