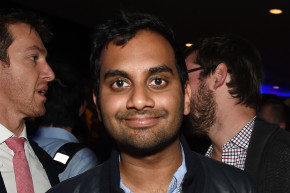 Kanye Made This Aziz Ansari Clip His Official Music Video

Because what could possibly top Aziz and Eric Wareheim eating pasta in Italy?

Comedians Aziz Ansari and Eric Wareheim recently spent time in Italy filming season two of their Netflix series Master Of None, and while there, they cobbled together an unofficial video for Kanye West’s “Famous.” Over the last two weeks, the vid has garnered nothing but praise from all corners of the internet, and Kanye must have agreed, because he’s made it the official video for the song.

It features Wareheim and Ansari galavanting on the streets of Rome, eating pasta, occasionally taking the time to lip sync Swizz Beatz’ ad-libs from the Life Of Pablo track. It’s so absurdly and wonderfully executed that it would have been hard for Kanye to top the duo’s natural goofiness. A rep for JASH, Wareheim’s comedy collective, told Consequence of Sound:

Eric [Wareheim] uploaded it on his own YouTube channel with the help of JASH, a comedy collective that he helped found, when Kanye agreed to have it be the official music video for the song.

Ansari and Wareheim’s video brings to mind the video comedian Zack Galifianakis made for Kanye’s “Can’t Tell Me Nothing” in 2007. The video features the Baskets star and Will Oldham lip syncing the words to the song while riding around on tractors and baling hay on Galifianakis’s North Carolina farm, and it was actually the second video filmed for the song. The first was directed by Hype Williams and shows Kanye rapping in the desert. The comedian’s version is arguably more memorable.

And while it’s delightful that Kanye deemed this video official, it’s not entirely surprising. The Life Of Pablo was created, hyped, and released in an unapologetic, downright guerilla manner. The album’s title changed, its art changed, and the release dates and distribution plans changed. Songs changed, and then they changed again after the “release” of the album. Even his pop-up Pablo shop ended up selling bootleg clothes from a teenage artist. That Kanye repurposed what’s ostensibly a parody vid into his actual vid fits perfectly with the IDGAF ethos of TLOP.  And ultimately, it just adds another page to the well-documented bromance that’s been brewing between Kanye and Aziz in recent years, which is pretty charming all on its own.