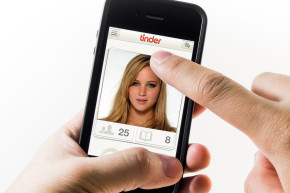 Currently, the feature is only being tested with a “small group of users” in Australia. It allows users to log onto the app and create a group of friends. They can then swipe through Tinder to match with other groups. Sometimes going out with one person that you just met on the internet who might be totally lame or a serial killer is scary. Hanging out with a group takes the pressure off. OR! Puts the pressure back on for a sex bacchanal. In theory, the feature would also allow couples who are down for a threesome to make a joint profile allowing them to seek out that kind of thing. Chances are, Tinder is probably keeping all of the above in mind with this new feature.

To be fair, there already a Tinder for threesomes, foursomes, and other garden variety group sex. It’s called 3nder, and it’s been around to satisfy the needs of swingers for a few years now. It lets curious couples and singles make profiles and search for other likeminded group sex-loving folks. It’s not to say that the Tinder Social won’t be used for the same reason. But it doesn’t hurt to have another option or three.