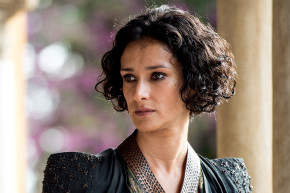 Game of Thrones returned for its sixth season Sunday by showing some of its strongest characters in a rare state of vulnerability. Cersei Lannister received news of the death of yet another one of her children, Daenerys Targaryen was subjected to threats and taunts as a prisoner of the Dothraki to which she was once the Khaleesi, and Melisandre revealed that her true form as a frail, elderly woman. Ramsay Bolton even flashed a human side while mourning the death of his former mistress.

The episode was generally well-received by critics and fans alike, but for a show that gets much of its appeal from ruthless shows of strength, it’s unusual to see that the one such act in the Season 6 premiere was what drew the most criticism. Back in the jolly land of Dorne, Ellaria Sand–best known as the woman who screams bloody murder after The Mountain caves in Oberyn Martell’s head–kills acting ruler of Dorne Doran Martell for being soft on the Lannisters.

Vocativ analyzed social chatter during and after the premiere. Dorne was mentioned 7,411 times on Twitter, but despite giving fans a chance to see some blood early in the season, the scene was mostly panned:

You have to ask why D&D bothered putting Dorne in at all. They haven't done it justice!#GameofThrones

Why can't the #GameofThrones writers get Dorne right? Every scene set there is lame as!

The hate for this plot line is justified. Ellaria’s character has been sparsely developed, other than to repeatedly show how much she hates the Lannisters. Her band of female fighters, the Sand Snakes, come across as hokey more than anything. But for fans of the book, this story line is doubly painful to watch because of how much of it was cut for the show.

Tech Insider has a thorough roundup of this. In the books, the Sand Snakes were Oberyn’s bastard daughters, and his death throws the entire city into chaos. The infighting extends beyond just Doran and Ellaria; Doran’s children and the Sand Snakes plot against each other as well. Myrcella Lannister becomes a pawn in multiple parties’ quest for power, and Doran reveals that he’s been secretly plotting against the Lannisters the whole time.

Sounds a little juicier than just Ellaria being pissed and wanting to kill Myrcella, but with so much material in the books, some things have to get watered down. With how poorly the Dorne story line has translated however, most fans would have preferred it had just been left out altogether.

Dorne storyline is still the shittiest. Bad story, acting, with characters who are there just to be killed #gameofthrones

Hey Dorne! You're still the worse thing about the entire show #GameofThrones

I dorne care about Dorne. #GameofThrones