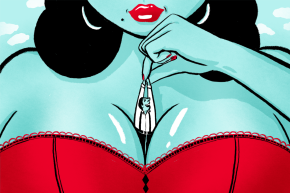 ‘I Wished I Was The Ladybug:’ Inside The World Of Size Fetishes
By Tracy Clark-Flory

‘I Wished I Was The Ladybug:’ Inside The World Of Size Fetishes

At SizeCon, the fantasy of skyscraper-size women and mouse-like people comes to life 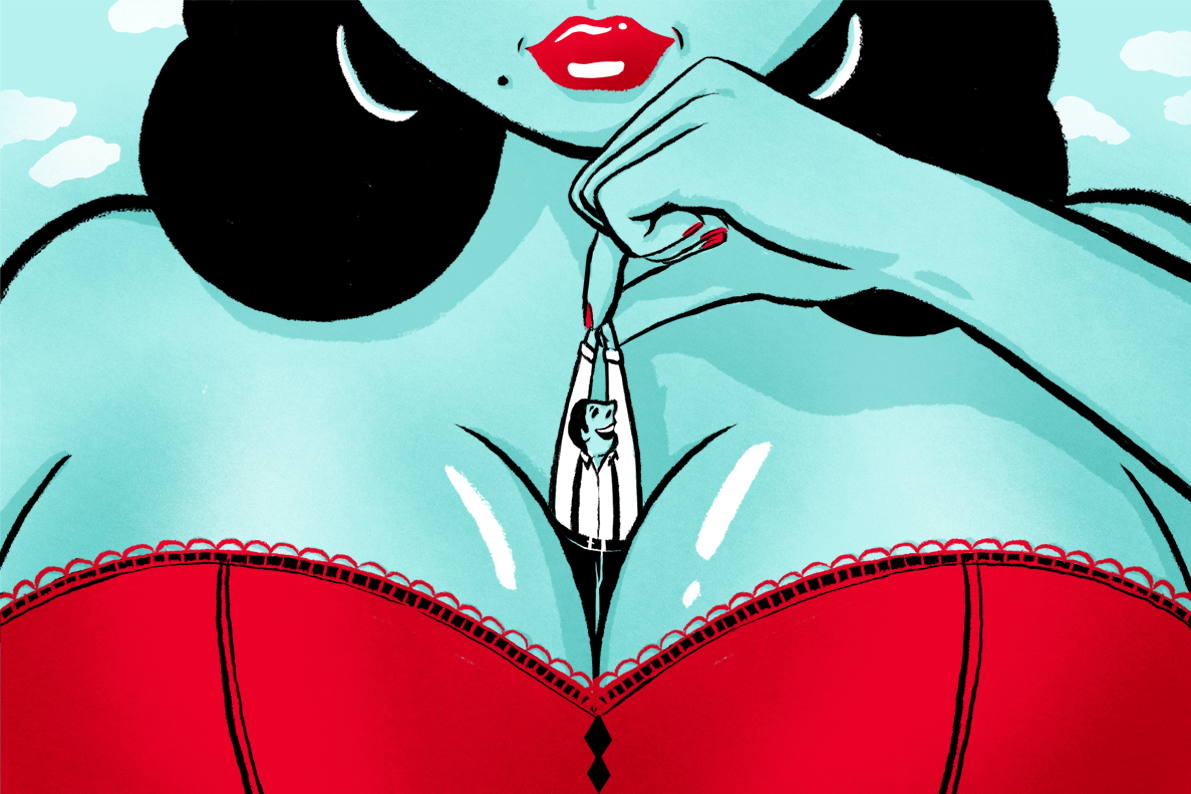 “John” remembers being little—no older than 5-years-old—and seeing a group of girls gathered around a ladybug on the playground. “I walked up to look at it and they were like, ‘No, you’re gonna hurt it, you’re gonna kill it!’” he said. “They made me feel like a monster, and I hated that,” he said with a shaky wipe of his brow. “I remember feeling, like, I wish I was the ladybug.”

This, he says, is the first time he remembers wanting to be tiny. John, a 27-year-old of average height and stocky build, has what are called shrinking and giantess fetishes. The New Jersey native fantasizes about an alternate universe in which he’s the size of a mouse and is captured as a pet by normal-sized humans who use him for sexual gratification. Sometimes, he fantasizes about giant women towering menacingly over cities, like Attack of the 50 Foot Woman, a movie he saw as a kid.

These may seem like unusual fantasies, but he was in good company the weekend before last at SizeCon in New York City, a first-ever event of its kind which drew more than 120 people. Many of the attendees first met online, in an array of forums dedicated to the fetish. The Internet has helped them understand their interests, find a sense of belonging, explore their sexualities and, in some cases, incorporate these desires into their real lives.

Some fantasize about being shrunken to miniature—often just a couple inches tall at the very most—and being dominated by normal-size humans. Others like the idea of being average-size but dwarfed by a larger-than-life giant. Then there are those who prefer the allure of teeny tiny people and the image of being larger themselves.

These fetishes are often grouped under the catch-all term of “macrophilia,” although sometimes “microphilia” is used to describe those who specifically like the fantasy of being small or have a fascination with miniature creatures. A subset enjoy the idea of “tinies” being crushed underfoot or swallowed whole, a genre known as vore. Some entertain what are known as “expansion” fantasies, in which body parts—typically breasts, butts and penises—grow dramatically, often to extreme proportions.

They all crammed into a small event space in Manhattan decorated with posters of skyscraper-sized women and an assortment of props—from an enormous crayon to a miniature binder that held the drink menu. A green screen let people immortalize their fantasies of stomping over cities or, alternatively, being stomped on. VR headsets allowed for the sensation of being a crumb-size person dropped into an attractive woman’s mouth, stepped on by a pair of well-manicured feet or squished between a pair of enormous breasts. Just under a dozen vendors set up tables to display size art—from illustrations of boobs swelling to the size of small planets to photos of bikini-clad models towering over de facto Ken dolls.

Much of the online size community is organized around these digital cartoon renderings, and if you went to SizeCon looking for the stereotype most often associated with such things—guy gamers with long ponytails and questionable social skills—you could find it. But the crowd, although predominantly young and male, was much more diverse than that cliche. There were bearded and tattooed hipsters, attractive young couples looking like they just walked out of J.Crew and a graying older gentleman wearing a smart straw hat.

The truth, though, is that researchers don’t know a whole lot about how kinks—be they minor or all-consuming—develop. As J. Paul Fedoroff, director of the Sexual Behaviors Clinic at the Royal Ottawa Mental Health Centre in Canada, put it, “Almost certainly there are multiple explanations for how people got that way,” he said. “There are many different ways that people can develop these interests and behaviors and feelings.” Those explanations can include things like physiology, hormones, conditioning—or it it could just be an extreme manifestation of widespread attractions, like to tall people. It’s common for people to explain fetishes with early experiences, although he says that people can place too much emphasis on that.

Forty-eight-year-old JulieKat, as she’s known in the online size-related fetish community, remembers being 9 years old and playing in front of a full-length mirror in her friend’s bedroom. “My friend grabbed a pillow off her bed and she shoved it up the front of my shirt,” she said. “All I could do was just stand there and stare at myself, and it was suddenly like [my friend] was a million miles away. I could hear her laughing, but all I could see was what had happened to me.”

JulieKat suddenly snapped out of it, ran the few blocks back to her house, threw herself on her bed and cried. “I was scared, I was excited, I was five minutes from my first orgasm,” she said. “It was really powerful for me.”

Despite the early emergence of these interests, plenty keep it secret from their families. John has told his friends about his fetish, but he refuses to tell his parents. “I plan to take it to the grave,” he said. “I’ve had nightmares where my dad knew and I woke up and was so happy it was just a nightmare.” This secrecy has led to some uncomfortable moments—like the time his mom started singing The Rolling Stones’ “Under My Thumb” in the car and he began crawling out of his skin at her unwittingly employing a visual he found incredibly, painfully erotic.

Then there’s Bob, a 48-year-old from Kentucky who with his fair skin, wire-rimmed glasses and subtle drawl cuts the picture of a conservative Southern gentleman. He runs the expansion site MaxGrowth and uses a combination of prosthetics and special effects to create videos where boobs, and sometimes butts, swell to the size of very large beach balls. Bob even employs a special seamstress who constructs outfits using carefully guarded trade secrets to allow for this bodily inflation.

He’s been married to his wife for 28 years, but has never told her about his kink, because he’s too afraid of how she’ll react. She doesn’t know about his business, which he does on the side in addition to mainstream video work, either. While he was at the conference, she thought he was away on business. “I need to just bite the bullet and sit her down,” he said. “I aspire to tell her and try and make the best out of whatever arises.”

A 32-year-old who goes by Miss Kaneda in giantess forums is in real life a furniture salesman in Massachusetts who wears a suit every day to work. At SizeCon, he—that’s his preferred pronoun—donned a dress, heels and a hot-pink headband. It was the first time Miss Kaneda went out in public in a “female persona,” as he put it. His wife is aware of his self-described “sadistic” fantasies, which involve being a giantess and squashing tiny people, but she doesn’t share them. “As much as she’s supportive, she’s not into this,” he said. So Miss Kaneda’s fetish has been restricted to giantess forums, and trying on women’s clothing in the few short moments between when he returns home from work and dinner. He lives with his two sons and a few immediate family members who don’t know about his fetish.

But when he returned home from SizeCon, which he called “one of the most amazing and inspiring days of my life,” he felt newly confident about opening up more with his wife. As he wrote on his blog after the conference, “I’d experienced what it was like to just put every bit of myself out there, and if a room full of complete strangers could embrace and love me for who I was, it was beyond foolish that I couldn’t trust the person who accepts and loves me more than anyone in the world to have the ability to do all that and more.”

SizeCon offered several examples of couples who have successfully incorporated their fantasies into their relationships. There was a young woman wearing a turquoise wig and pink glasses, and her goateed boyfriend of eight years. He’s into tiny women, she’s into breast expansion—it’s a funny match, but they make it work taking turns with roleplay. “Jack,” a handsome 27-year-old with blue eyes and dark hair, got into touch with his fantasy of being shrunk to doll size a few years ago, in part thanks to encouragement from his girlfriend “Diane.” She’s always identified as dominant, so Diane fully embraced his fantasy of being little. (They live in rural Pennsylvania and she says if they hadn’t met through OKCupid, she would be “dominant and alone.”)

Twenty-nine-year-old Jitensha, one of the organizers of the event, is a macrophile and into vore, but Sergio, her husband of six years, is vanilla. “He had no idea what this was,” she said during a SizeCon panel on how to maintain relationships in the size community. “Sergio just wants to, like, do missionary,” she said. But they incorporate role playing, and not just in the bedroom—for example, while walking down a windy street, he once whispered to her, “You better watch out or you’re going to blow away.”

During that same panel, JulieKat talked about her pointers for maintaining a happy relationship in the size fetish community—although a lot of the advice was just as applicable to vanilla relationships. She and her husband of 14 years, a size cartoonist who goes by the name BustArtist online, don’t share all of the exact same fetishes, but they take turns exploring each other’s turn-ons. “Because it’s his kink and he enjoys it so much, that’s the best feeling in the world to me,” she said. “There’s probably not a whole lot of people out there who are willing to do that for their partner.” During the panel, BustArtist made her cry by announcing, “I’ll never win the lottery, because I got her.”

But, really, the greatest love story here is about the Internet. It’s not only how JulieKat and BustArtist first met—thanks to an early breast expansion chatroom—it’s also how so many of them figured out that they weren’t alone in their size obsession and started to build community. It even helped some, like John, to gain enough confidence to come out to his pals. It’s also how he first began to make sense of that early memory of wanting to be the ladybug.

He was 13-years-old, using dial-up and searching for something—he didn’t know what, exactly—when he came across a site with wallpaper images of little fairies in the forest. It was close, but not quite right. Then he stumbled across the term giantess. “I remember a eureka moment,” he said. “I just went, ‘That’s it! That’s what this is.'”

In that way, the Internet helped him bring his fantasy woman to life. “There was a real power in being able to make art, being that a giantess could never exist,” he said. “It’s nice to not have to hold the thought every time you want to see one.”

This article originally identified Jitensha as a microphile. It has been corrected to identify her as a macrophile.