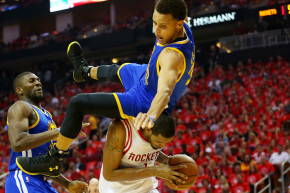 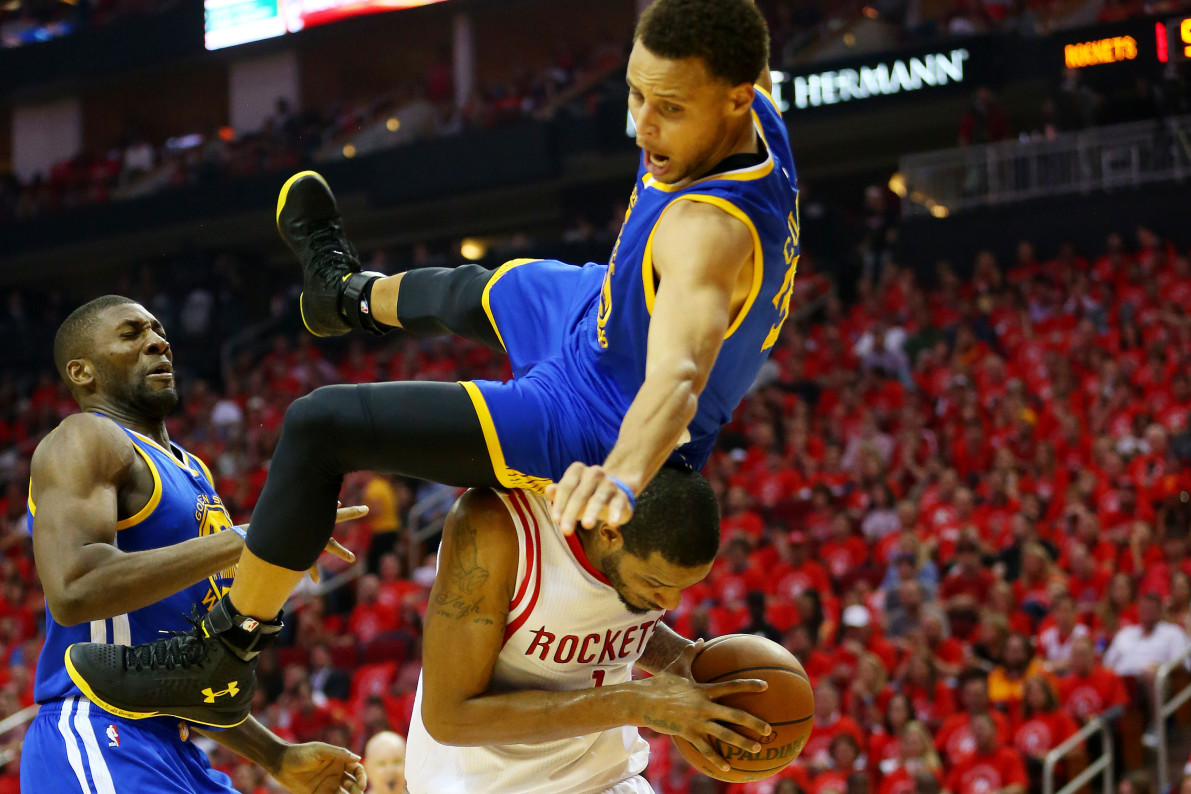 If there’s one thing that might halt a magical, seemingly destined march to a second consecutive NBA title by the 73-win Golden State Warriors, it’s this: Stephen Curry will miss a minimum of two weeks after suffering a Grade 1 sprain of his MCL.

The injury occurred in the second quarter of Game Four against the Houston Rockets, Curry slipped on a wet spot on the court. His right knee buckled and wrenched and Curry collapsed, writhing in agony and clenching the injured joint.

Stephen Curry slipped and fell and now isn’t starting the 2nd half with a knee injury. UGH https://t.co/5U8Uh9mC3f https://t.co/pc7pu3XtHT

Curry tried to return in the second half, but to no avail. “[Curry] was shook up; he was crying,” forward Draymond Green told USA Today. “It’s pain. It’s wanting to be out there with your guys. He was quiet, so I said everything to him. I just told him, ‘Hold your head up. It’ll be all right. But then get the (expletive) out of here.’ We got you. Get out of here.”

For one game at least, Green was right. The Warriors destroyed the Rockets, outscoring them 65-38 after the half, tying the NBA record for threes made in a playoff game. Even without Curry, they shouldn’t have much trouble dispatching the listless, bickering Rockets in game five, but as ESPN’s Kevin Pelton calculated, things get a tad dicey in the next few rounds, even if Curry misses the minimum amount of time.

Sans Curry, the Warriors significantly regress on offense, scoring just 1.6 points per 100 possessions more than an average NBA team, while remaining dominant on defense, holding opponents to 4.4 fewer points per 100 possessions. In all likelihood, they’d still hold the edge in a round two matchup against either the Los Angeles Clippers or Portland Trail Blazers, but not so much should they be Curry-less in the conference finals versus the Western Conference’s heavyweight contenders, the San Antonio Spurs and the Oklahoma City Thunder.

But the Warriors aren’t the first all-world, dominant NBA team to see a presumed path to glory derailed by an injury.

Mike D’Antoni’s Seven Seconds or Less Phoenix Suns were the Warriors spiritual and stylistic antecedent, a revolutionary, pick-and-roll centered NBA offense that relied on a miniscule lineup featuring 6’10” power forward Amar’e Stoudemire at center, an octopus-armed, floor-spacing Shawn Marion at the four, and gunned treys at a record-setting rate. Alas, in game two of the second round against the Dallas Mavericks, sharpshooting wing Joe Johnson was streaking downcourt when he fractured his orbital bone on a failed dunk attempt, causing him to miss the rest of the series.

The Suns still managed to knock off the Mavericks but they fell to the Spurs in five in the conference finals, dropping the first two games on their home court before Johnson could make his way back into the lineup.

In the strike-shortened 2011-12 NBA season the Bulls finished with the best record in Eastern Conference, powered by the defending MVP, Derrick Rose. Facing the Philadelphia 76ers in the opening round, the Bulls were up by 12 with 1:22 to go, and even though Rose had been sidelined for 17 games that year with a pu pu platter of nagging injuries, for some odd reason head coach Tom Thibodeau still hadn’t yanked his starters. As is his want, Rose drove to the rim straight into the teeth of the defense, awkwardly leaping into the air and shredding the ACL in his left knee.

As to why Rose was on the court at all, “I don’t work backwards like you guys do. The score was going the other way,” Thibodeau explained, confidently asserting that Rose’s injury wouldn’t be a problem. “We’ll deal with it,” he said. The Bulls lost to the Sixers in six.

But perhaps the best precedent is the 1972-73 Boston Celtics. They’d gone 68-14, tying the mark for most wins in a season, destined for a clash with the Los Angeles Lakers, a matchup in which they’d have a significant advantage.

“They were 4-0 against the Lakers that year,” the longtime NBA scribe and basketball historian, Bob Ryan told Grantland. “[NBA MVP Dave] Cowens killed Wilt, he was too fast for him. Wilt was too old at that point. You can look it up, I think Cowens averaged 31 and 19 against him that year. But Havlicek got hurt.”

John Havlicek, the Celtics’ all-star, do-everything swingman, dislocated his shoulder in the third game of the conference finals against the New York Knicks. Though Havlicek gamely returned for the final three contests, his left arm was more or less useless, playing one-handed and scoring just four points in game seven as New York barely eked past Boston, 4-3. The Knicks would go on to wallop the Lakers in the finals.

If past is prologue and the Warriors want to avoid a similar fate, they’ll have to pray that Curry’s able to return to his all-world self. And though today’s diagnosis revealed that he suffered with the least severe kind of knee sprain, if there are any complications or setbacks, the Warriors’ season may be all but over.