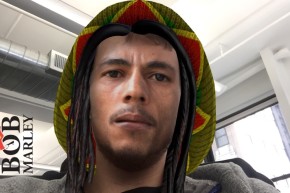 What Was Snapchat Thinking With Its Blackface Bob Marley Filter?
By Ryan Beckler

What Was Snapchat Thinking With Its Blackface Bob Marley Filter?

Snapchat is lighting up social media on 420—and not in a good way.

Stemming from the recent success of its face-changing features, the platform decided to join the 420 party with a Bob Marley filter, a choice that just about everyone thinks is incredibly misguided. First off: it’s blackface. The filter darkens the skin of anyone who uses it—to the tune of Marley classics!

Beyond that, some are calling the filter out for ignoring Marley’s accomplishments as a musician and work as a vital voice for disadvantaged communities, turning him into a (literally two-dimensional) weed stereotype. It’s worth noting, the Jamaican singer and activist didn’t even play a part in the 420 movement that took off during the 1970s in California.

Surprisingly, the Marley estate reportedly signed off on this stunt.

“The lens we launched today was created in partnership with the Bob Marley Estate, and gives people a new way to share their appreciation for Bob Marley and his music,” Snapchat said in a statement to Gawker. “Millions of Snapchatters have enjoyed Bob Marley’s music, and we respect his life and achievements.”

As of 11 a.m. ET, “Bob Marley” was trending on Twitter was with almost 45,000 tweets, many of which called out the filter as offensive or racist.

Yes, that @Snapchat filter of Bob Marley is racist. I'm judging y'all. Hard.

The Bob Marley filter on snapchat is not ok. It's racist and perpetrates a stereotype. He did more than just smoke weed #420 #BobMarley

.@Snapchat @snapchatsupport, why is the racist Bob Marley filter still up!?!

the Bob Marley filter is so unnecessary and so racist my head is actually hurting thinking about it. well done @Snapchat, you played urself