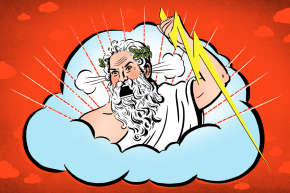 All The People God Kills In The Bible

Three million is low-balling it 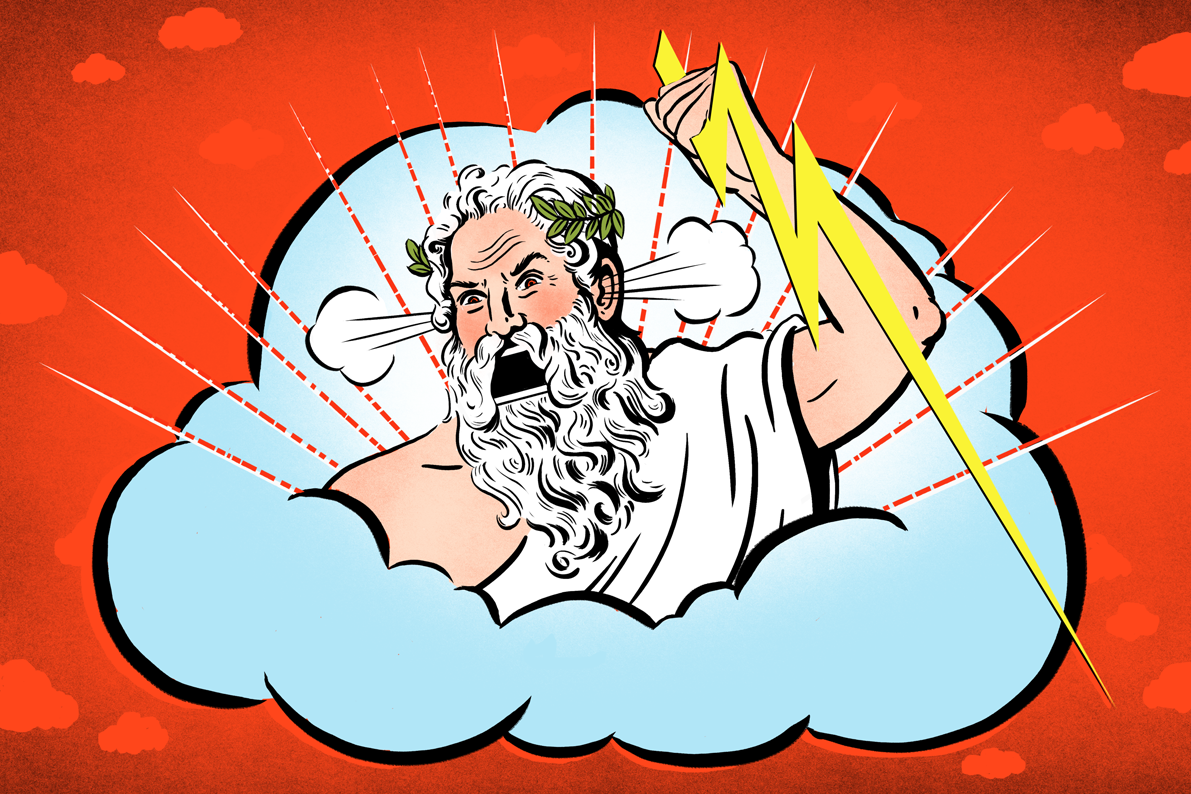 “Game of Thrones” will serve up fresh swathes of murder when it premieres its new season on Sunday, April 24, but its famous death count runs a distant second to another beloved tome: the Bible.

An analysis of every slaughter in the good book reveals that, despite authoring the commandment “Thou shalt not kill,” God caused the untimely deaths of at least 2.8 million people, a slaughter of truly biblical proportions, in which he uses walls, plagues, bears, floods and other people to execute huge numbers in inventive and vengeful ways. GoT’s onscreen death count is a paltry 704.

There are 160 separate killing sprees in the Bible for which God is demonstrably to blame. That number includes every slaughter in the Old and New testaments, and also in Aprocrypha, the contested books which are included in the Roman Catholic Bible but disregarded from the Hebrew version. A total of 2,821,364 deaths are specifically enumerated in scripture as either directly orchestrated by God, or carried out with his assistance or approval. Satan, on the other hand, notches up only 10 kills.

And that’s only the cases where the Bible provides a hard and fast figure. For 53 of those 160 kills, among which we have genocides, famines, and other massacres, readers simply aren’t told how many people lost their lives. Atheist Steve Wells, whose book “Drunk With Blood: God’s Killings In The Bible” painstakingly chronicles every single person who dies in the sacred text, estimates God’s total kill count is closer to 25 million.For the purposes of our analysis, Vocativ only considers kills which Moses, David, and the rest of the Bible’s authors clearly spelled out for us mere mortals. That means, for example, that we have to omit the Flood of Noah, which Wells says comprises a big chunk of that total.

In the flood, God supposedly gives himself a mulligan and reboots the earth, saving one human family and a boatload of animals to repopulate the planet. In Genesis 7:21, it’s written that “all flesh died that moved upon the earth.” God drowns everyone for their “wickedness” bar his chosen survivors, but the Bible does not state explicitly how many died to afford him the almighty do-over.

Of the 107 occasions where God’s unimaginable killing power can be counted, a single massacre in 2 Chronicles immediately makes that book the bloodiest in the entire book. Asa, King of Judah, one of the 12 tribes of Israel, begged the Lord to stop an army of “a thousand thousand” Ethiopians, which were attacking his kingdom. God liked Asa because he “took away the alters of the strange gods,” and so his request was granted. “The Lord smote the Ethiopians … they were destroyed before the Lord,” it states in 2 Chronicles 14:12-13. It’s one of several times God steps in to help his followers, the Israelites, win a war.

But God doesn’t discriminate—earlier in 2 Chronicles, the Lord smites 500,000 of his own men, simply because other Israelites ask him to. Facing an ambush from the defected Kingdom of Israel, the men of Judah “cried onto the Lord.” It was all God needed. “There fell down slain of Israel five hundred thousand chosen men,” it’s written in 2 Chronicles 13:17.

One of the most oft-cited books in the Bible is Leviticus, particularly for its two verses condemning homosexual acts. (Leviticus also condemns adultery, tattoos, sleeping with a woman on her period, shaving, eating shellfish and other sins that are popular sticking points for many dissenters of Judeo-Christian faiths.) It might come as a surprise that a book so concerned with condemnation is one of the least lethal in the Bible: God carries out just two killings, burning the sons of Moses’ brother Aaron’s to death for doing what all teenagers do—playing with fire. They were caught igniting “strange fire before the Lord, which he commanded them not.” In the next verse, 10:2: “And there went out fire from the Lord, and devoured them, and they died before the Lord.” God: strangely strict about fire safety, yet still fights fire with fire.

While 2 Chronicles is certainly the Bible’s bloodiest book, it’s never explained how the Lord carries out his two biggest massacres; in both cases, scripture simply states God “smote” his victims. That’s actually the case for most kills—the Bible fails to state exactly how God stubs out 1,670,083 lives, just that he wills it to be so, we guess. When it does explain precisely how the Lord slays his victims, we learn his methods are shockingly inventive, and darkly effective.

Take, for example, 1 Samuel, in which God destroys three cities, then smites the surviving populations with hemorrhoids to punish the Philistines after they steal the ark of the covenant. After the Philistines bring the ark to the city of Ashdod, God disciplines them: “The hand of the Lord was heavy upon them of Ashdod, and he destroyed them, and he smote them with emerods [hemorrhoids].” (1 Samuel 5:6) The Philistines apparently aren’t very fast learners, because their solution is to move the ark to another city, which God once again destroys, again smiting survivors with hemorrhoids (5:9). The Philistines still don’t get it, though, moving the ark to a third city, which God also stubs out and hits the survivors with, you guessed it, hemorrhoids (5:11-12). The Bible never specifies how many lose their lives in this grotesque punishment, or how hemmorhoids were even fatal. It’s possible that ‘smote’ in this sense means ‘afflicted’ rather than killed. Regardless, because no number was given, God’s ‘roid rage doesn’t count towards the death count. The book does, however, specify that the Lord kills two sinners by giving them bowel disease (2 Chronicles 21.14-19; 2 Machabees 9:5-28).

The Holy Father inflicts a host of other strange deaths: In 1 Kings 20:30, God dispatches 27,000 Syrians by making a wall fall on them. That’s after he assists in killing 100,000 Syrians after they call him a “god of the hills.” It’s written: “The rest fled to Aphek, into the city; and there a wall fell upon twenty and seven thousand of the men that were left.” Oof. Just a few verses later, God sends a lion to kill a man for refusing to smite a prophet. “As soon as he was departed from him, a lion found him, and slew him.” (20:36) That’s actually the second lion the Lord sends to do his bidding in 1 Kings. In another bizarre killing, God sends two bears to tear apart 42 boys for making fun of prophet Elisha. “There came forth two she-bears out of the wood, and tare forty and two children of them.” (2 Kings 2:24) Beyond the well-known plague of locusts, the Lord also has other insects in his repertoire, and he’s not afraid to use them, helping the Israelites overcome their enemies by setting wasps on them. It’s written in Wisdom 12:8-9: “God will send the hornet among them, until they that are left, and hide themselves from thee, be destroyed.”

No matter how much you disliked God’s policies, back in Old Testament days, the worst thing you could do was bitch about it. The mere act of complaining caused him to unleash snakes, fire, and a plague. When the Israelites complained about a lack of food in Numbers 21:6, God sent “fiery serpents” to kill them. When 250 of Korah’s followers complain that Moses was putting himself on a pedestal, God has Moses ask them to burn incense and then burns them all to death: “There came out a fire from the Lord, and consumed the two hundred and fifty men that offered incense.” (16:35) When 14,700 people complained about all of the people the Lord had killed for complaining, he sent a plague to kill them, too. “There is wrath gone out from the Lord; the plague has begun.” (14:46)

Most of the time, God is a big fan of the Israelites. The Lord plays some part in killing 1,050,009 of the their enemies throughout the good book—a big assist. They do their part, though, righteously slaying 1,540,494 people in the name of the Lord for wrongs against them. The Bible’s biggest individual assassin is David, the second king of the United Kingdom of Israel and God’s favorite monarch, who smote, slew and slaughtered 81,050 people on the Lord’s behalf. In 2 Samuel, he carries out what is arguably his most grotesque killing—and that’s saying a lot, considering David commits massacres and genocides in a single book. In order to buy a daughter from Saul, the first king of Israel, and make her his wife, he gifts him 200 Philistine foreskins. “David arose and went, he and his men, and slew of the Philistines two hundred men; and David brought their foreskins … And Saul gave him Michal his daughter to wife.” (2 Samuel 18:27). Quite the dowry.

All told, God killed and supported the killings of a hell of a lot of people in the Old Testament (though barely any in the New Testament). The obvious question is whether God’s killing, and the deaths he assisted and supported, were justified. Rich Deem, who has run the encyclopedic resource Evidence For God since 1997, said: “The charge that God indiscriminately murdered people does not hold to to critical evaluation of the biblical texts.” Deem argued the commandment “Thou shalt not kill” purely refers to premeditated murder, and said that when the Lord annihilated swathes of people, it was because those people had sinned. “He would spare the wicked to save the righteous,” Deem insisted.

Wells, who literally wrote the book on this, disagreed, and reckons it’s tricky to try and justify things like killing a million Ethiopians in one go for any reason. He told Vocativ, “I don’t know how someone could read these and think, ‘oh, ok, well that’s alright. I believe that god did these killings and I’m ok with that.’ I think most [followers of the Bible] either don’t know about them, or at least they don’t focus on them. There’s almost none that you could point to and say, ‘yeah, it seems like they had it coming. That’s morally justifiable.'”