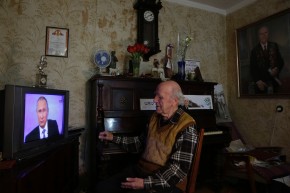 When You Binge-Watch TV For 4 Days Straight, Things Get Weird
By Tracy Moore

When You Binge-Watch TV For 4 Days Straight, Things Get Weird

One man may have set a Guinness World Record with his feat of laziness, but it’s not recommended

Brooklyn resident Alejandro “AJ” Fragoso just set the Guinness World Record for TV binge-watching after clocking in 94 hours straight of nearly unblinking consumption, besting some Austrians who had just watched 92 hours three weeks earlier. He pocketed $2,000 for his troubles, but what did that intense burst of sitting and looking do to his health?

Fragoso began the event with two friends on a Friday morning and kept going until Tuesday morning around 6 a.m., New York TV station WPIX reported. “Even the slightest look away from the screen will get you disqualified,” Fragoso told them. “You’re allowed a five minute break every hour to eat, use the restroom or just close your eyes.”

But otherwise, he was staring at a TV for a Clockwork Orange-reminiscent 94 hours straight. And while the effects of binge-watching on health have been studied more in depth in recent years given the proliferation of streaming services dropping entire seasons at once—diabetes, weight gain top the list—one nearly unbroken 94-hour block has to take a very specific type of toll. One participant was mostly concerned with getting bored, while another said she was getting stomachaches, but that’s the least of what could potentially happen.

“Your brain starts to suffer the effects of that, so you have microsleeps and micronaps where you can hallucinate.” Fragoso told the Washington Post that happened on the second day. “…We started seeing writing on the screen that wasn’t there,” he said. “You forget there’s an outside world at that point you’re trapped in this tiny room.”

Glatter explained that the brain needs continual stimulation to maintain awareness and alertness, something called RAS, he said, or reticular activating system. “If you don’t change things up with variety through either exercise or varied new experiences, it’s very difficult to maintain alertness,” he said.

“When you stay up that long, your body is fighting it, so your eyes can be open but you can begin having an altered state of consciousness.”

It’s also a strain on your heart, Glatter said. “Your insulin levels go up when you stay inactive that long, it increases your lipids temporarily, and you store more fat. When you deprive yourself of that much sleep, you can trigger cardiac arrhythmia, increased blood pressure, and that itself can lead to heart attacks. Another issue is seizures, even strokes, when you have sleep deprivation at that level.”

Fragoso was lucky—Glatter says the 25-year-old is “a young guy with no medical problems,” and advised Fragoso to “stay on a Mediterranean diet because of its low glycemic index, so there’s no sugar crash.”

Unlike the typical fare we imagine catering our binge-watches—cookies, chips, booze—Fragoso ate lots of nuts and seeds and other protein like fish and chicken, Glatter says. “But small meals—he didn’t overeat. He stayed hydrated with water and Gatorade.”

As a result, though Fragoso had an elevated heart rate and hallucinations at the event’s end, his blood pressure didn’t change over the four days, and his breaks for naps and stretching kept his stamina up.

Even with the worst bout of flu, most of us will never consume TV in a completely sedentary position for 94 hours without breaks, unless we’re wiley enough to try to beat Fragoso’s record. But we still watch a lot of TV all at once. A 2016 study by consulting firm Deloitte found that 70 percent of U.S. consumers binge-watch, with some 31 percent doing so on a weekly basis.

Netflix surveyed TV viewers in 2014 to determine what we mean when we use the term binge-watching, and it turns out, most people define it as taking in anywhere from two to six episodes of the same show in one sitting, though others think of it as a weekend marathon, or one sick day of catching up on old episodes of Roseanne. Three quarters of those surveyed viewed binge-watching as a positive thing.

While we’ve arguably been binge-watching for decades, either by TiVo-ing, or tearing through a DVD boxset, or straight up channel surfing, it’s a more widely engaged in phenomenon now–one we can more easily document and bond over. Not only do people love to binge-watch when a new show drops, we then live-tweet it. Media outlets even offer binge-watching guides, understanding the new way we consume full seasons at once. It’s also a marker of social citizenship—if you’re the only person who didn’t finish House of Cards while everyone else blazed through in a weekend, you’re going to have trouble keeping up with the office chitchat. (Fragoso and his friends watched Curb Your Enthusiasm, Bob’s Burgers, Battlestar Galactica and Game of Thrones.)

As a result, the health effects are beginning to be better understood. Every hour sitting is said to increase your risk for diabetes by 3.4 percent, for starters, according to recent research out the University of Pittsburgh on the effects of TV watching on diabetes risk, published in the journal Diabetologia. Even five hours of sitting and lounging decreases circulation and metabolism. A daylong binge is good for a 30 percent higher risk for the disease—even if afterwards, you go for a jog.

“There is an independent effect of sitting behavior on diabetes incidence that does not have to do with physical activity,” researcher Bonnie Rockette-Wagner told Time in 2015 of the diabetes study. “It’s an independent, additional effect.”

We also tend to overeat while watching–increasing the risk of obesity–along with experiencing the well-documented sadness viewers often feel after wrapping up a whole season or three of a beloved show: post-binge-watching blues with symptoms such as depression and emptiness.

Fragoso’s seemingly consequence-free victory might make avid bingers conclude there’s a healthy way to overdose on TV for days, but Glatter says that’s not the case.

“I don’t recommend it at all, it’s very bad for your health,” Glatter says. “If you’re doing to do this, you need to be checked out by a doctor. Especially if you’re older, and you have preexisting conditions like diabetes or heart disease. By the 10th or 12th hour of this, you’re really pushing yourself. You know, even young people can have heart problems. Not saying [Fragoso] is going to have a heart attack, but unless you have good functional status, you’re really putting yourself at risk.”

For Fragoso’s part, he told WPIX he wouldn’t recommend it either, even to break his own record. “I would not do it again,” he said.