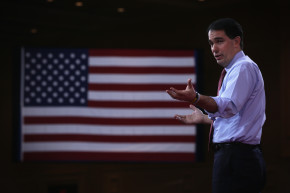 Drug Tests For Food Stamps: Terrible Policy, By The Numbers
By Tracy Moore

Drug Tests For Food Stamps: Terrible Policy, By The Numbers

If Wisconsin Governor Scott Walker had his way, recipients of food stamps would have to get drug tested first. A number of states already have such laws for state-distributed benefits—but the government still bans it for food stamps, a federal program. Walker hates that.

Previously, the governor had gone as far as to sue the federal government in an attempt to make the drug tests happen in Wisconsin. But this week, trying a different approach, Walker rounded up a posse of governor pals, calling for Congress to reverse its stance, despite research that indicates such testing is extraordinarily bad policy.

But what states are pushing for this legislation? And at what cost? Here’s everything you need to know about the latest battle over welfare benefits in America.

Walker and 11 of his governor friends across the country—in Arizona, Idaho, Kansas, Kentucky, Maine, Nebraska, Oklahoma, South Carolina, Texas and Utah—have signed a letter asking the U.S. Department of Agriculture’s Food and Nutrition Service, which administers the Supplemental Nutrition Assistant Program (SNAP) federally, to permit drug-testing for the program.

The federal government has ruled that drug testing for SNAP recipients is an invasion of privacy under Fourth Amendment protection against unreasonable search and seizure. But individual states can drug test recipients of cash from the Temporary Assistance for Needy Families (TANF) fund, under the 1996 Welfare Reform Act.

Nearly 40,000 Mississippi residents applied for assistance in 2014, and 48 of the 446 who were screened ended up testing positive. Arizona yielded just three positive drug tests out of nearly 150,000 applicants. In Tennessee’s first year of drug testing, they found 30 people to kick off benefits out of the some 30,000 applicants, and it cost them at least $11,000 just to outsource the drug tests. Catching 12 drug users in Utah cost the state $30,000.

That’s 14 percent of the population, according to the U.S. Department of Agriculture.

Advocates like Walker who push for tying the carrot of a clean drug test to financial assistance do so off the myth that welfare recipients blow their money on drugs. In a hearing about the issue, House Agriculture Appropriations Subcommittee chair Rep. Robert Aderhold (R-AL) said that “The federal government should not be enabling people to fund their drug addiction at taxpayer expense.”

But data shows that’s not what they spend their money on; it’s food, clothing, housing, and transportation, at a higher rate than the average person, and by spending an exorbitant amount of money rooting out a problem that doesn’t exist, states lose taxpayer money that could be allocated better, and of course, so do struggling families with children.

And while you can’t really put a number on shame, critics of the programs say all they do is waste taxpayer money and further stigmatize a group thats already been shamed enough. If you don’t need drug assistance, you may now have to jump through more hoops to get assistance. And if by chance you did need drug addiction assistance, fear of risking your family’s benefits would be a double bind.

Critics of these programs say they simply don’t work, in part because assistance seekers don’t do drugs any more than any of the rest of us. According to a government report, the national drug use rate in America is about 9.4 percent, and a ThinkProgress look at the seven states using drug testing in 2015 to filter applicants found that the average rate of drug use among those applying for assistance was below one percent in 49 of 50 states.

“Even if the policies did unearth drug users in need of help,” ThinkProgress concluded in its study, “that doesn’t mean states are going to get it to them” —either due to long waiting lists for treatment or programs that only identify you as a problem, not guarantee treatment.

“It’s an easy way to go on record to say you’re trying to save the state some money, help people addicted to drugs, make sure tax payer money not spent on a drug habit,” he said. “Sounds great as a sound bite, not accurate in a number of ways.”