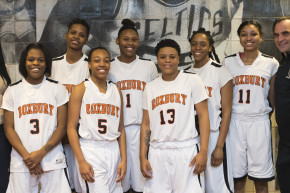 The Six-Person Basketball Team That Won A National Title

The Roxbury Community College women's basketball won a national JuCo title with just six players. Here's how they did it 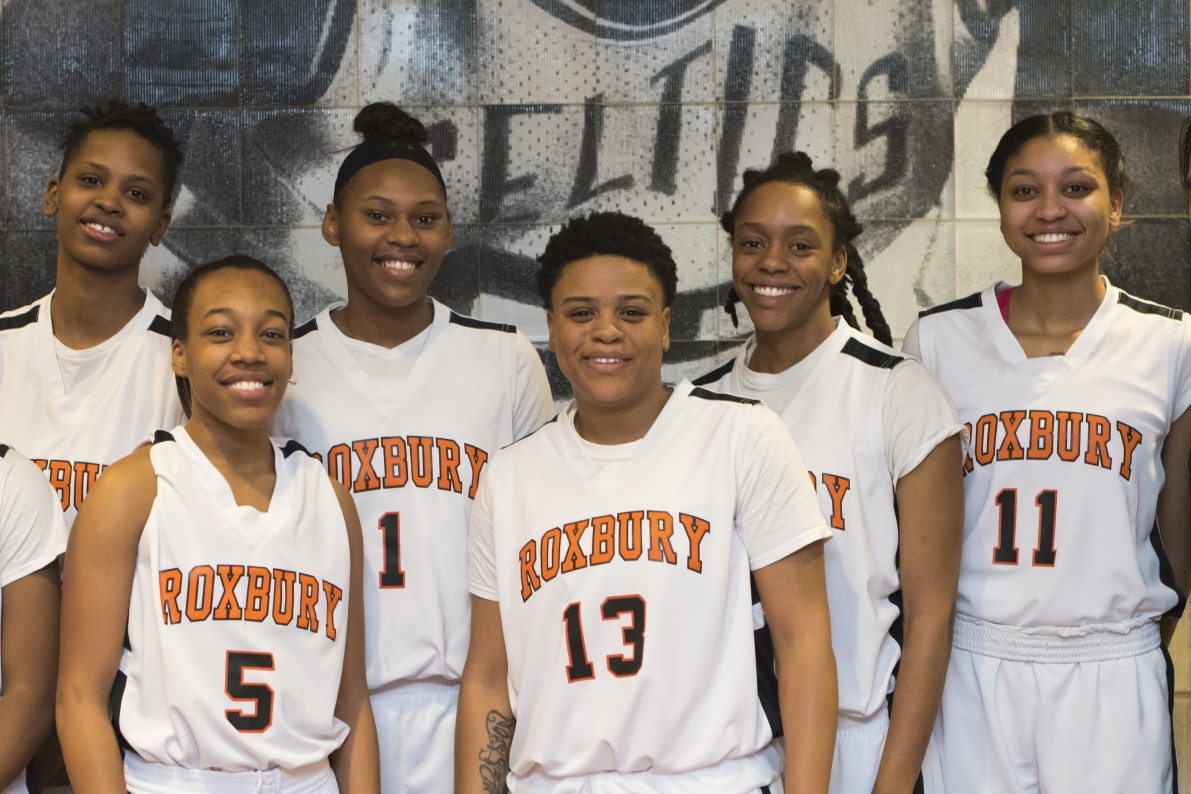 Roxbury Community College’s women’s basketball team, the nation’s No. 1 Division III junior college team for most of the season, ranked dead-last in roster size. The squad whittled down, one by one, from 11 in the preseason to just six by midseason.

One player made a late-summer transfer to a higher division junior college; one left after a week of classes to begin a photography business; one didn’t recover from a prior injury in time; one took a hiatus to stay closer to home for a year; and one left after the first semester to focus on her schoolwork.

Roxbury has been a powerhouse in NJCAA’s Division III for most of Leszczyk’s tenure, which began with the program’s rebirth in 2007 and has since yielded three trips to the national title game, albeit all losses. (The Lady Tigers had been successful in the 1980s under coach Alfreda Harris, a recipient of the Naismith Hall of Fame Basketball’s Human Spirit Award, but the program later lapsed.)

Following the roster attrition, Roxbury played most of the 2015-16 season against teams with fully stocked benches. “Ours looked empty,” said sophomore Alyssa Stewart, the division’s national player of the year.

At a banquet on the eve of the eight-team national tournament, Roxbury took its turn for a front-of-the-room greeting.

“We didn’t look that imposing—at all,” Leszczyk said, so he hatched a plan to assert his team’s merits as the No. 1 team: Roxbury would play its first tournament game in a full-court, man-to-man defense.

“I knew his reason for it,” Stewart said. “He wanted us to send a message out there.”

In its first of three games in three days, Roxbury won 86-63, holding Ocean County to 37 percent shooting and forcing 22 turnovers. Their next opponent, West Georgia Tech, played 13 players, sending out waves of substitutes at a time to keep the pressure on the thin Roxbury squad. Leszczyk knew his team needed to adapt, so for half of his 30-minute walk-through the next morning, he installed a 2-3 zone, which the Lady Tigers hadn’t even practiced all year. Despite only 15 minutes of preparation, Roxbury again won, this time 61-54 after holding their opponents to 28 percent shooting.

“They went out and played the entire game in a 2-3 zone and executed it,” Leszczyk said. “It was just amazing to watch.”

By the time Roxbury’s title game against Northland had ended in a 61-57 victory, to culminate a 25-2 record in the school’s first national championship season, each of the six players had logged between 83 and 114 minutes over three days for an average of 100—the equivalent of two and a half full games.

How Roxbury got to six players, however, is less interesting than how the six players got to Roxbury, which is a testament to how they got through a seemingly impossible season.

Stewart has five sisters and two of them—her twin, Amanda, and her two-year older sister, Kenya—were teammates on Hartford’s Weaver High team that won the 2012 state title. Kenya went on to play at UMass-Lowell while Amanda played last year at Roxbury and hopes to rejoin next year.

The three grew up making the five-minute walk from their home to the Parker Memorial Community Center to play. Alyssa remembers winning a youth summer league hosted at that gym. She furnishes a photo of the championship squad on her iPhone; there were only six. (“I’ve always played with a small team,” she said.) Stewart said she didn’t have the grades to go straight to an NCAA university and says that junior college “was the best choice for me.”

“Coach Mark pushes you to succeed,” Stewart said. “He’s a strict coach, and I think that’s good. Me, I was not disciplined at all.”

The best offer for Taj Lewis, a star at Longmeadow (Mass.) High—who preceded Stewart as NJCAA player of the year—out of high school was Division II Post University, but she aimed higher.

“I felt like this would be a better opportunity for me to get better looks and get where I actually wanted to be at in my basketball career,” Lewis said. “I felt like I would settle if I was at that school. It wasn’t the division I wanted it to be.”

Newsome, who attended West Roxbury High, accepted a scholarship to play at Division I Temple in 2010 but left after a year. She bounced around Massachusetts, living in Worcester, Boston, and Lynn, working security jobs at office buildings, hospitals, and construction sites.

“I realized how much I missed playing basketball,” Newsome said. “Coach Mark always checked in on me, to see how I was doing, and always told me that if you want to come back and play, I can always play on this team.”

Leszczyk makes a point to note that his listed roster is wrong, not for its player size, but for the title of his fellow coach—Kisandra Ayanbeku is his associate coach, he insists, not his assistant. After he receiving a national coaching award, Leszczyk called her and spoke in the plural, “We got coach of the year.” He calls her a role model to the players for her own career: a three time all-conference selection and league defensive player of the year at NCAA Division III Montclair State, a graduate assistant position on Division I Canisius’ coaching staff, and a day job as an operations specialist at State Street, a Boston-based financial services company.

Ayanbeku spent her first year after college at Roxbury as Leszczyk’s second assistant before going on to her graduate assistant gig, but felt her calling was in the junior-college ranks.

“I want to coach because it’s more than just basketball,” she said. “I want to actually have an impact on young individual’s lives.”

There is no student housing and no scholarships at the junior-college level. There are no practices on Fridays to help leave enough time for part-time jobs to pay for accommodations. (Four of the six players share an apartment.) Even the coaching jobs are not full-time.

Leszczyk commutes 70 minutes daily from Rhode Island where he owns a small outdoor advertising company that his son primarily runs. (“I’m too young to say ‘semi-retired,’” he said.) The all-consuming nature of the job is apparent even at home. He and his wife have taken in a former player who had been struggling in the work force after her basketball scholarship offer fell through.

Just as Leszczyk kept in touch with Newsome for years, he’s done the same for this player, who now plans to return to school and finish her associate’s degree. When Stewart’s apartment wasn’t ready before her freshman year, Leszczyk drove two hours out of his way—each morning and each evening—for three days to help her commute to classes.

All five of his graduating players have scholarship offers, from a variety of NCAA Division I and Division II universities, as well as some NAIA schools. Those options come on the heels of some impressive statistical accolades: Lewis’ 23.4 points per game ranked fourth nationally while Stewart’s 22.2 was sixth; Stewart also ranked sixth in rebounding average (13.7 per game); “Downtown” Amariah Brown’s 47.1 three-point percentage led NJCAA Division III; and Newsome’s 2.8 assist-to-turnover ratio was second among players who averaged at least 10 minutes per game.

Stewart plans to study psychology on a basketball scholarship at Division I Florida A&M; Newsome has a couple D-I offers and wants to pursue either sports medicine or business. Lewis also is deciding between D-I scholarships and hopes to enter a pharmacology program.

“Whatever reason they come here—whether it’s a financial reason, an injury, or grades, or whatever it is—it’s getting them over that hump, develop them as first-year college athletes here, and then moving them forward,” Leszczyk said. “We call it a ‘bridge to the future’ or ‘bridge to greatness.’ I use some corny terms.”

Even with such grit, sustaining success is difficult with only six players when five are necessary at all times. There are practice concerns; five-on-five intrasquad scrimmages are impossible. Ayanbeku, who graduated college only five years ago, would often participate in drills. Conditioning is critical, which began in the pre-season: logging miles, running hurdles, and repeating sprints. Their home gym is part of the Reggie Lewis Track and Athletic Center, which has an expansive field house.

“We really are a running type of team,” Newsome said, despite her own laughing admission that, “I get tired quickly, no matter how much running I do. I just know to continue pushing myself through, give all that I have, and then worry about being tired after the game is over.”

Newsome played 960 minutes in 26 games, meaning she was on the court for 92.3 percent of all game action. Stewart (89.1 percent), Lewis (87.4 percent), and Brown (82.0 percent) were all north of 32 minutes per game while the unit’s lone freshman, Breonna Pinkcett, was at 73.9 percent and Janicha Diaz was just behind at 72.6 percent. Staving off the toll of fatigue required intense training.

“Everything was just extra,” Stewart said.

Foul trouble could be crippling, too, and Newsome was whistled for three offensive fouls in the first quarter of the national semifinal, leaving her only two away from disqualification over the final 30 minutes. She sat out less than a minute and returned for the rest of the game. (Leszczyk said that, after winning the tournament, the first video replay he reviewed was to judge the validity of Newsome’s fouls rather than bask in the joy of the title game win.)

“Ryia is our engine,” Leszczyk said. “We could have won games this year with any five—except Ryia. If we lost her, we were in trouble.”

Such concerns are long gone and next season’s roster is expected to have a full complement of players, so the Lady Tigers can now revel in their success. The victory lap has included being honored at a Celtics game, meeting Boston’s mayor, taking a celebratory Duck Boat ride, and receiving an invitation to throw a ceremonial first pitch before a Red Sox game.

“We’re all like sisters,” Newsome said. “I’m the oldest, so they’re all my little sisters like I took them under my wing. Our bond is stronger due to the simple fact that we were down to six.”

At the end of the season, however, Roxbury made it down to one.