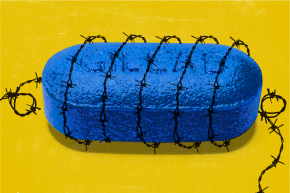 Around the world, people have to jump through hoops, and sometimes break laws, just to get it 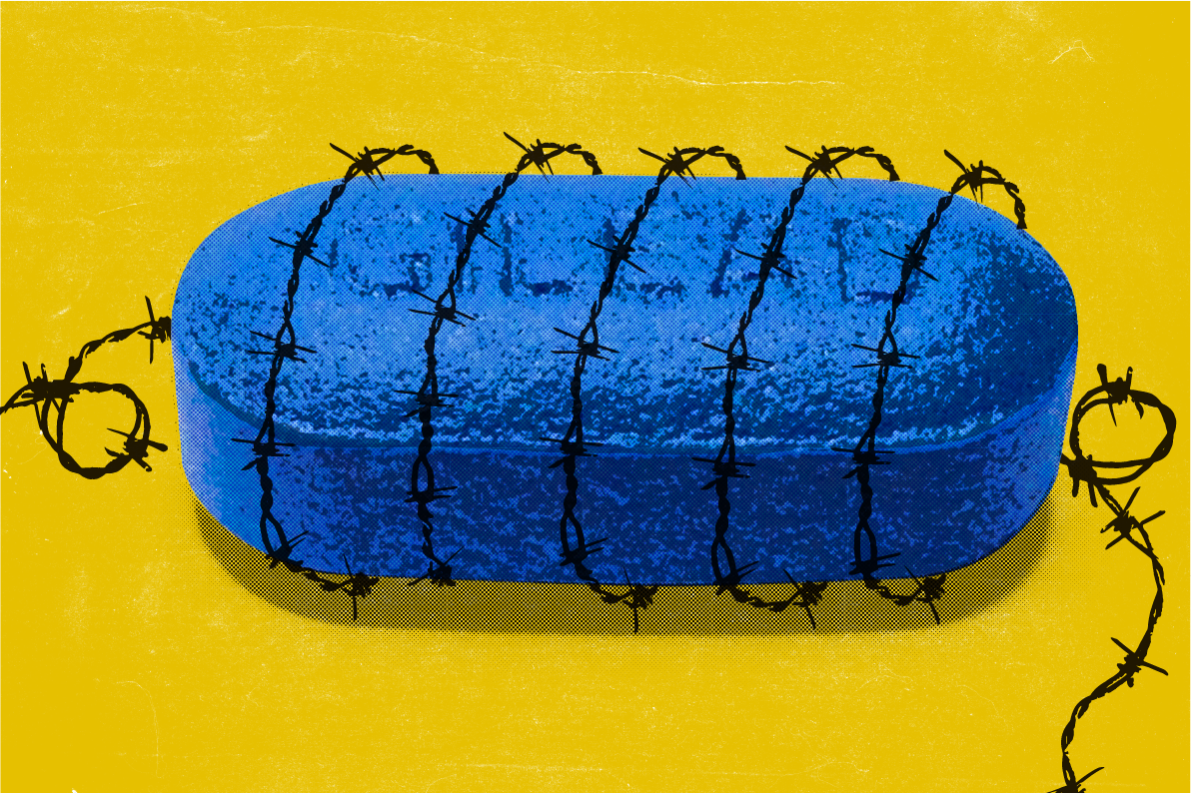 “Adam,” a 38-year-old living in Germany, recently began illegally importing drugs. Thanks to a stranger he met on Facebook, he managed to find an online international distributor of his drug of choice in India. He used a forwarding service to route the shipment through the U.K. so it seemed less suspicious, and then to him in Germany. Adam, who requested a pseudonym to protect his identity, was careful to order no more than 90 pills at a time—just enough to fly under the radar.

As much as this might sound like a story of narcotics trafficking, it is far from it. Adam is ordering pills that helps prevent a disease: HIV. We’re talking about Truvada, a name-brand pill that was approved in the United States in 2012, for individuals at higher risk of contracting HIV, who take medication each day to reduce the likelihood that they’ll become infected if exposed. It’s called pre-exposure prophylaxis, or PrEP for short.

The pill has been estimated to be 99 percent effective when taken daily in preventing the transmission of HIV—a development that has been hailed as revolutionary—and yet it remains unapproved for that use in most of the world.

As a result, in many countries it’s difficult to find a doctor willing to prescribe it—not to mention to get healthcare coverage of the brand-name drug, which can run anywhere from more than $500 to over $1,000 a month. This leaves many around the globe who want the drug with few good options. Those include journeying to other countries where the drug is more readily available, ordering generic versions of the drug from online pharmacies, employing forwarding services and generally working the hell out of the system. These are a lot of hoops to jump through—but for many, PrEP is well worth it.

“It’s really about [individuals asking], ‘How do I get the healthcare that I need? There’s not a clear path so I have to get creative,'” said Jim Pickett, director of prevention advocacy and gay men’s health at the AIDS Foundation of Chicago, speaking to the situation abroad.

Though Truvada is already used throughout the world for HIV treatment, it remains widely unapproved for prevention. In addition to in the U.S., preventative Truvada has been okayed in Canada, Kenya, Peru, and South Africa. France, Israel and Switzerland have approved it for off-label use, which means greater accessibility and government coverage as public health programs can begin formally offering PrEP. Activists in the United Kingdom were widely expecting approval, but last month NHS England, the national health service, passed the buck on the decision, arguing that local authorities should be responsible for commissioning the drug. Just this week, the NHS announced it would reconsider the decision following a public outcry.

Despite its promise, PrEP hasn’t escaped controversy. The president of the AIDS Healthcare Foundation, Michael Weinstein, infamously called it a “party drug” and argued that it would undermine condom use. It’s easy to imagine that such critiques—which PrEP activists argue are punishingly moralizing and repeat the same arguments made against the emergence of the birth control pill and condoms—might factor in the delayed approval. Although, some suspect the hold up has more to do with the potential cost of coverage in countries with government-run healthcare. “When the state is paying, they’re slower,” said Pickett.

As a result of this PrEP blackout, thousands have gathered online to swap tips about how to navigate their country’s laws to obtain Truvada. A major resource is the Facebook group PrEP Facts, which has nearly 14,000 members. Users from all over the world post about their successes or failures with obtaining PrEP where they live, along with the names of reliable online pharmacies. Two major sites have popped up in the U.K.—Prepster.info and iwantprepnow.co.uk—to both guide people on their options and agitate for approval.

“As with anything, there are the earlier adopters who are figuring it out and passing it along to others who are on the sidelines,” said Pickett. “I really see it as creativity, I see it as resilience. These are people who really want to stay healthy. They want to have enjoyable, pleasurable sex lives that don’t leave them with HIV.”

Judging from online forums like PrEP Facts, the most popular avenue for obtaining the drug in countries where it is unapproved is ordering generic versions of Truvada sold by online pharmacies. But many countries, including the U.S. and most of Europe, outlaw these shipments. That’s why Adam, who gets his supply through alldaychemist.com, uses a forwarding service that routes his order through the U.K., where these orders are allowed. It’s less suspect that way, he says.

Given all the fees involved, he ends up paying roughly $76 for a bottle of 30 pills—and a moderate amount of worry. “I’m relying on customs being seriously understaffed and therefore unable to pay too much attention to shipments within the EU, with the exception of recreational drugs maybe,” he said. “Most definitely, the current situation provides far less peace of mind than I would like to have and that makes it difficult to recommend PrEP to others.”

Nicholas Feustel, a 44-year-old filmmaker living in Hamburg, orders generic Truvada through an online pharmacy and has it shipped to his partner, who lives in the UK. He visits him regularly and picks up his supply when he does, as German law allows for travelers to bring in a limited supply of generic pills, and it’s legal in the UK to receive such shipments. Not counting the cost of his plane tickets, a 30-day supply costs him around $80, including delivery costs. “I’m very privileged,” he said of his ability to afford frequent trips out of the country.

Will Nutland, co-founder of the UK-based Prepster.info, is tapped into a network of international PrEP activists and is aware of a couple handfuls of people who are flying to other countries just to obtain generic Truvada—and that number is only growing. Pickett, who has undertaken a study of men using the drug where it isn’t approved, has observed the same phenomenon. “I know stories of people who are going to Thailand and the Philippines to get Truvada and then going back home,” he said.

People encounter trouble even in places where it’s legal to order generic drugs from online pharmacies. Many countries, including within the U.K., restrict the amount you can order at a time, hold up shipments of generics in customs or charge import fees. Trevor, a 48-year-old from London, gets his generic Truvada imported from Singapore. Twice, the non-descript packages have made it straight to his front door, but the most recent time it mysteriously disappeared in transit. He ordered a replacement shipment and it got delayed in customs. In the meantime, to tide him over, he had to borrow pills from three different friends.

Gaps in access are a critical concern, since the pill is meant to be taken daily, and inconsistent use confers less protection from HIV.

None of this is to mention the uncertainty about the quality of these generics. Nutland, in concert with I Want Prep Now and a select few participating doctors, is trying to do something about that. They have been working on testing the blood of people taking mail-order generics, each of which has a batch number, to see if they are taking an authentic generic. So far, each one they’ve tested has passed the test. “We’re publicizing the batch numbers so that if someone else has that same batch number they know that the generic is the real thing,” he explained.

Short of entering the gauntlet of online generics, some resort to what’s known as “clinic-hopping.” In addition to being used as treatment for HIV, Truvada is also widely used as post-exposure prophylaxis, or PEP, for instances in which, for example, an ER doctor is accidentally exposed to HIV on the job. PEP involves a weeks-long series of doses started within 72-hours after suspected exposure to HIV. So, some claim they’ve been exposed to HIV as a means of obtaining Truvada they intend to use preventatively. As Greg Owen, a London-based PrEP activist, wrote on his blog, “I know of people who will spend 1 day going around 2-3 clinics … collecting 3 month’s supply in one day, some of these ‘clinic hoppers’ take their PrEP pill every other day so 28 pills actually lasts them 2 months.” It’s believed that this approach to PrEP, which is called “reduced dosing,” can be effective, but no large scale studies have proven it.

Another avenue in countries where PrEP isn’t approved is finding a doctor willing to prescribe the drug for off-label use. But even if someone is able to find a doctor willing to color outside of the lines, it means paying full price for a very expensive drug. “That will cost you about 5,000 pounds a year just for the cost of the drugs,” he said. “For an American audience, that might not sound like a lot, but obviously we have a different health system, and for most of us that level of payment for a medication isn’t what we’re used to and for most people it’s not affordable.”

As it stands, PrEP is difficult enough to obtain, even for those with the financial means to pay for expensive online shipments or regularly cross borders. “We know that PrEP in its initial stages is going to be used by people with the disposable income to be able to pay 50 bucks worth for the drug a month, and there are people that can’t afford that,” said Nutland. “We care about ensuring PrEP isn’t just made available as what we’re calling a ’boutique intervention.’”

That is not only because of the health benefits, but the psychological ones too—particularly for gay men. “For so many people, going on PrEP is this overwhelming sense of peace of mind,” said Pickett. “When you’ve been fearful of death and dying and HIV and danger and risk every time you have sex, there’s this thing going on in your head that’s on the pillow next to you, that’s in the room with you. To have something in place that provides such robust protection that you can actually relax? It’s really, really powerful.”

That’s certainly true for Adam. He came out in the early ‘90s, when, as he put it, HIV seemed to inevitably lead to AIDS and, ultimately, death.

“That was so impressive that I never really came to embrace my own sexuality,” he said. “Instead, I was shaming myself and others for living our desires. PrEP is giving me back at least part of the ease I never really experienced.”