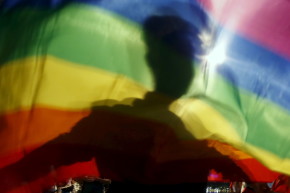 North Carolina’s controversial anti-LGBT law is less than a month old and already causing economic pain. PayPal announced it would cancel a planned expansion in NC, and now Deutsche Bank is following suit, pausing plans for an expansion which would have brought 250 jobs to the state.

#DeutscheBank joins @HRC @PayPal @Springsteen and many other voices in opposition to #HB2 in #NorthCarolina pic.twitter.com/2fkK3hKNPR

The bill, known as HB2, became law at the end of March. It removes anti-discrimination protections for LGBT people, and prevents cities from passing new protections at the municipal level. It also requires transgender people to use the bathroom of their sex at birth, rather than the gender that they identify as. In addition to PayPal, Deutsche Bank also joins a group of 120 CEOs who have signed a letter to Governor Pat McCrory condemning the law, along with a number of film and TV production houses who are threatening to take their business elsewhere.

We take our commitment to building inclusive work environments seriously. We’re proud of our operations and employees in Cary and regret that as a result of this legislation we are unwilling to include North Carolina in our US expansion plans for now. We very much hope that we can re-visit our plans to grow this location in the near future.

PayPal has said it’s eyeing other locations for its expansion. But with Deutsche Bank, there’s potential it will move forward with the plans in the future, if HB2 is struck down. Attorney General Roy Cooper has been vocal in his opposition to the law. He’s running against McCory in the gubernatorial race in November, and if elected, it’s safe to bet based off previous comments that he’ll fight for its repeal. Of course, there’s a lot that can happen between now and November.