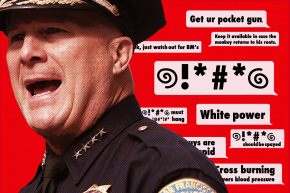 Bigots By The Bay: San Francisco Has A Cop Problem
By James King

Bigots By The Bay: San Francisco Has A Cop Problem 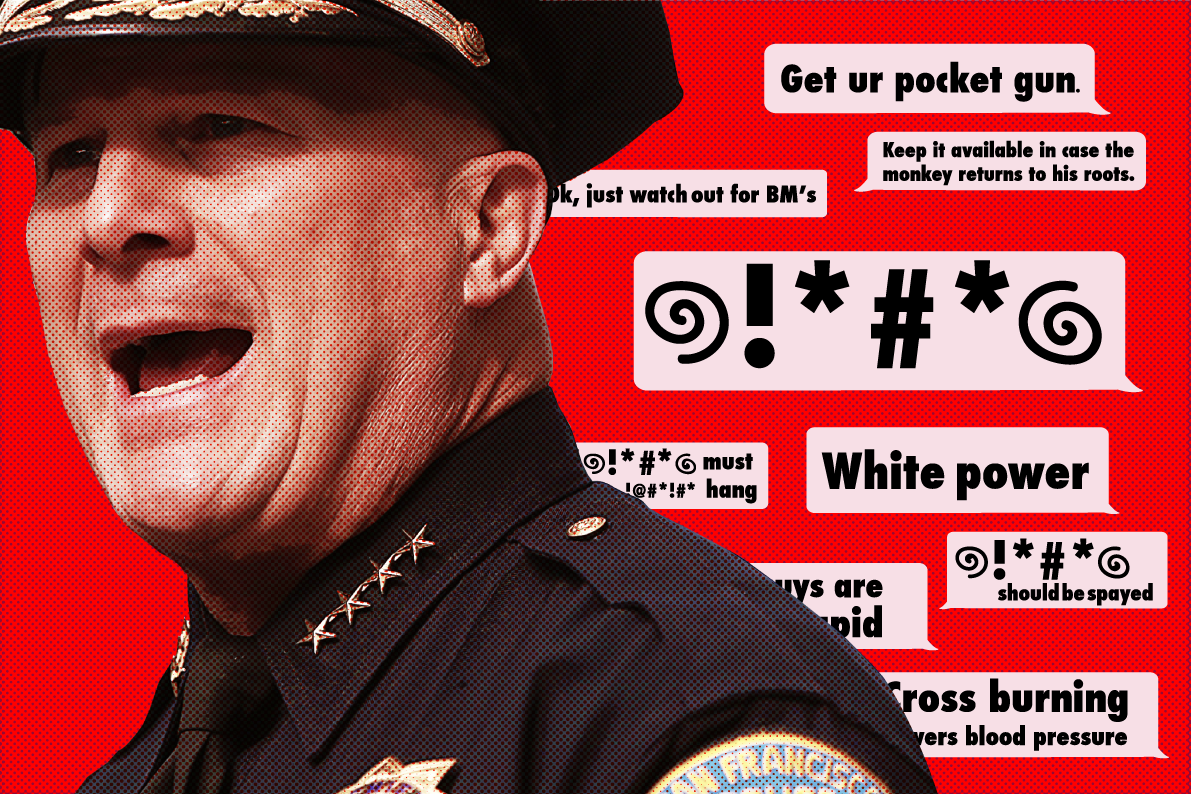 A serious pattern of alleged racism and bigotry has emerged in the San Francisco Police Department rank and file, culminating in the discovery of a new trove of racist text messages exchanged among several officers—the last straw that prompted a call for a civil rights investigation into the department’s treatment of minorities.

“It’s almost too unbelievable to be true,” said Adante Pointer, a Bay Area civil rights lawyer, who spoke to Vocativ about the collection of race-based scandals that have rocked the SFPD for more than a year.

Prosecutors announced last month that several of the department’s officers exchanged dozens of racist text messages, which were unearthed during an investigation into a cop who was accused of sexual assault. “The N-word [was] repeatedly used” to describe African Americans, according to District Attorney George Gascon, and other homophobic slurs were used to attack the city’s LGBT community.

Please follow this link for our statement regarding an Internal Affairs investigation: https://t.co/Dx7g2MNnAA #SFPD

Some of the newly discovered text messages were sent during a time period when a separate texting scandal was still unfolding in the SFPD. Fourteen officers were accused last year of making racist and anti-gay remarks in text messages that date back to 2011 and 2012.

“All niggers must fucking hang,” wrote one officer in the spate of racist text messages that were released by the Department of Justice in March of 2015 in an effort to deny bail to former SFPD Sergeant Ian Furminger, who was one of five SFPD officers convicted in February that year on federal corruption charges for stealing thousands of dollars during raids of the homes of drug dealers. In response to that text, Furminger wrote, “Ask my 6 year old what he thinks about Obama.” In another, Furminger was asked if they celebrate Kwanza at his kids’ school. “Yeah we burn the cross in the field! Then we celebrate Whitemas,” he responded.

In all, 18 SFPD employees have been implicated in the ongoing texting scandal, a tally that includes the four officers discovered during the investigation into Jason Lai, the cop who was accused of sexual assault, and charged recently for misusing DMV records. The text message debacle forced prosecutors to review more than 4,000 cases handled by the officers involved. The review is ongoing, but so far 13 cases have been dismissed.

It’s not just a collection of text messages that concern critics of the SFPD. It’s the actions of the officers, as well as the statistics that show African Americans are arrested at a much higher rate than any other race in the city.

“I think it’s a mismanagement from the top,” said one officer who spoke with Vocativ on the condition of anonymity because he is employed by the department and is not authorized to comment on the investigation. “And it’s cronyism—people who are ‘in’ with the command staff get away with whatever they want and it sends a message that certain things are tolerated.”

The city’s police chief, Greg Suhr, has come under fire for the racist text messages and for a string of officer-involved shootings of minorities where the use of deadly force has been called into question.

SFPD has a problem w/ violence & bias. And it's not a quick fix. Wed. 11AM: enough is enough https://t.co/UCrckcYWPR #MarioWoods #AlexNieto

Alex Nieto, who was Hispanic, was in a city park in 2014 when he had an encounter with four SFPD officers after a woman called police to report that she saw a man with a gun acting erratically. Nieto, who was a security guard, had a Taser holstered on his hip when police arrived. The details of what happened next are up for debate; police say Nieto pointed the Taser at the officers and they thought it was a real gun. The attorney representing Nieto’s family told Vocativ that never happened. Regardless, the officers fired 59 shots at Nieto, killing him. District Attorney Gascon declined to charge the officers in Nieto’s death.

In another instance, Mario Woods, a black man, was suspected of stabbing a man in the shoulder when he was cornered by nearly half-a-dozen officers from the San Francisco Police Department on a crowded street in broad daylight in the city’s Bayview district in December 2015. Woods, whom authorities say was still carrying a knife, refused to cooperate with the officers as they attempted to take him into custody.

“You better squeeze…that and kill me,” Woods said to the officers. Then he tried to walk away—which is when five officers fired at least 21 rounds, killing him. The Department of Justice is currently investigating the SFPD’s use of deadly force in the Woods shooting, which was caught on video by a bystander. The officers who shot him have not been charged with any crimes.

“That’s a synopsis of the SFPD,” said Pointer, who represents the Nieto family. “Every shooting over the last few years has been justified. Chief Suhr has ratified every use of deadly force… and it always comes within a day or two of the incident.”

The officer who spoke with Vocativ disagrees with the assertion that there is a culture of racism at the SFPD—like any police department, there are some bad apples, he said, but the overwhelming majority of cops in San Francisco are good cops. The actions of the department’s top brass, however, are taking its toll on the rank and file.

“People are tired of the chief,” the officer said. “There’s just a whole malfunction in the command staff that needs to change. Somebody should come in and evaluate it at least.” The SFPD did not respond to Vocativ’s request for an interview with Chief Suhr.

In his critique of the SFPD’s practices, Adachi cites an independent study conducted by the W. Hayward Burns Institute For Juvenile Justice, Fairness and Equity that found African Americans make up about six percent of San Francisco’s population but account for 40 percent of the arrests. African Americans are seven times more likely to be arrested than white people and 10 times more likely to be convicted of a crime, according to the report.

“These incidents reveal a pattern and practice within the police department that has allowed racism and disparate treatment of black and Latino people to fester and grow,” Adachi wrote in his letter. He concluded that, at the very least, an investigation into the SFPD would “help restore the confidence of San Franciscans—and those around the nation who are watching—that the San Francisco Police Department in not engaging in racist practices and is instead following the best practices called for by the President Barack Obama Task Force on 21st Century policing.”