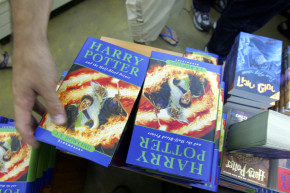 Harry Potter Book Was Protected From Leaks By British Spies

It seems almost like an act of God that the Harry Potter franchise, which has raked in more than $7 billion in book sales alone, was never the victim of pre-release piracy throughout the 2000s. But in the case of the sixth book–Harry Potter and the Half-Blood Prince–it wasn’t an act of God, rather it was the work of the U.K. intelligence agency GCHQ, which was called upon to help prevent an early leak of the book.

The GCHQ, a.k.a. the Government Communications Headquarters helps monitor online communication, much like the National Security Agency in the United States.  In a radio interview last week, Bloomsbury Publishing’s Nigel Newton revealed that every precaution was taken to ensure Harry Potter and the Half-Blood Prince didn’t fall into the wrong hands before it was released. The publisher used guard dogs, and it sent a security detail to the printer, and all in all, it was extremely careful. So careful, that it had the GCHQ watching its back too. Newton said, via the BBC:

“We fortunately had many allies. GCHQ rang me up and said, ‘We’ve detected an early copy of this book on the internet’. I got them to read a page to our editor and she said, ‘No, that’s a fake’. We also had judges and the police on our side.”

Bloomsbury just didn’t want the Harry Potter-loving public to learn of the death of a certain character before the book was released. Newton continued:

“It was completely mad and we were at the eye of the storm–I remember Jo Rowling phoning me once after she had delivered a new book saying, ‘please will you release the name of the title because I have people outside searching my trash can looking for bits of paper’. We had to go into a complete security lockdown because people were trying to steal the manuscript.”

Apparently, according to Newton, a tabloid reporter also tried to pay workers at the printing press £5,000 to steal a copy. Seems like those guard dogs did their job.