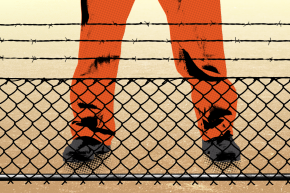 How Hard Is It To Escape From U.S. Prison?
By Brian Patrick Byrne

How Hard Is It To Escape From U.S. Prison? 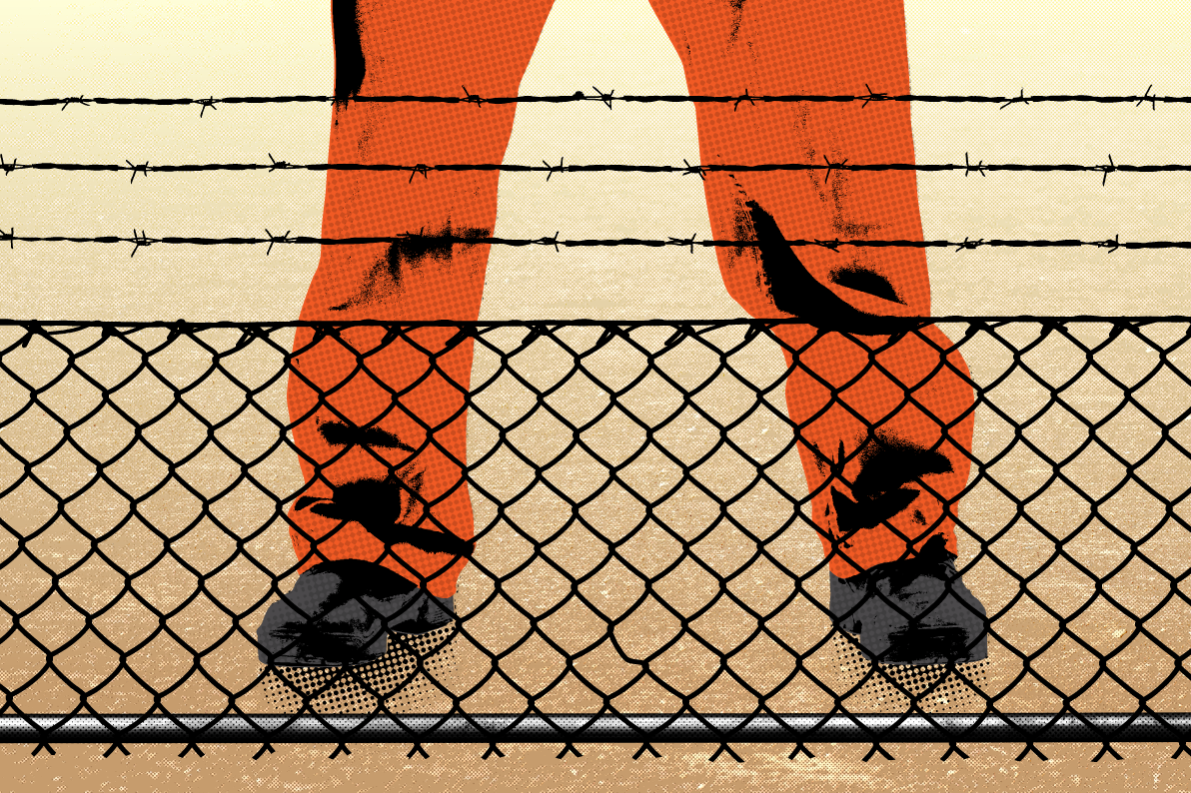 What does it take to make a break? — Photo Illustration: R. A. Di Ieso
By Brian Patrick Byrne, Jody Sieradzki, Leon Markovitz and Tal Reznik
May 10, 2016 at 6:08 PM ET

Working night after night, Richard Matt and David Sweat used power tools to remove air vents at the Clinton Correctional Facility, where both were serving sentences for murder. After crawling through the openings they’d created, the two managed to hack into steam tunnels and escape via a manhole on the other side of the prison wall. In a trick right out of an old movie, the pair stuffed clothes under their bedding to fool guards doing night checks, and left a taunting goodbye note on their way out.

For three weeks after their June 2015 escape, they tasted freedom, before authorities captured Sweat and shot Matt dead.

Sweat and Matt’s escape was unique—mostly because they evaded capture for so long. (The majority of escapes are caught within hours.) But the escape itself, which seems like it ought to be nearly impossible in the age of high-tech prisons, isn’t quite as rare as you’d think.

Vocativ analyzed 36 years of data provided by the federal government to learn more about who escapes, and disappears from, the US correctional system.

More than a quarter of a million people successfully escaped from captivity between 1978 and 2014—specifically 260,297 prisoners, according to historical data from the U.S. Bureau of Justice Statistics.

But, not all lock-ups are equally easy to escape. Like Sweat and Matt’s, the overwhelming majority of those escapes were from state correctional facilities rather than higher-security federal prisons. Just 5,701 escapes during that time period were from federal detention facilities, which house those accused or convicted of breaching federal law, along with a few other types of criminals.

Escape from federal facilities has become more difficult since the late 1980s due to an increase in the number of United States penitentiaries. According to the Federal Bureau of Prisons website, these are typically high-security facilities with walls, reinforced fences and the highest staff-to-inmate ratio in the country.

Prison breaks in America peaked in 1994—coincidentally, the same year that feel-good jailbreak blockbuster “The Shawshank Redemption” was released—and then dropped off sharply.

Escapes from state institutions have fallen by as much as three-quarters since the 1970s. The BJS began collecting data in 1978 a year when 7,024 inmates escaped or went AWOL. By 2014, the most recent year for which data is available, that figure had dropped to 1,953, despite the U.S. prisoner population exploding from 277,473 to 1,350,958 during the same period. So while it’s more likely you’ll end up in the slammer, it’s much harder to sneak out.

Still—1,953 escapes in 2014—that sounds crazy, doesn’t it? In truth, the number is a little misleading, since it typically includes outright escapes (tunneling under the wall and running off into the woods) as well as going AWOL (disappearing from the system in a perhaps less dramatic fashion)—but more on that later.

Those escapes are still a tiny proportion of the total inmate population. Nationally, those 1,953 escapes or AWOLs in 2014 make up just 0.15 percent of the total state prisoner population, but in many states, it’s an even smaller proportion. In New York, the 22 escapes or AWOL prisoners in the state in 2013 accounted for a minuscule .04 percent of the total state prisoner population. The BJS does not provide data on offenders who tried and failed in their escape bids, but success, apparently, has a lot to do with where you get locked up.

The rate of escapes or AWOLs varies depending in which part of the country you’re sent to prison. As of 2014, almost all (99.8 percent) of prisoners were held in facilities within the state that sentenced them, so most of the time, where you do the crime is where you do the time.

For a long time, Michigan was where most prisoners broke free. Since 1978, 31,261 people have staged escapes or gone AWOL from Michigan facilities—that’s almost one in every eight prison breaks nationwide. In 1994 alone, 1,694 offenders broke free—Michigan’s worst year.

Since then, the number of escapes or AWOLs from facilities in the Great Lakes state have fallen steadily, finally dropping below 1,000 per year in 2001 and eventually numbering among the lowest in the U.S.. In 2015, data from the Michigan Department of Corrections shows no offenders escaped from any of their facilities. A single 2016 escapee is currently on Michigan’s most wanted list. Kevin Jermaine Wiley, 33, who was serving parole for manslaughter, disappeared after removing his electronic tether in Detroit. Wiley is now wanted for the murder of his girlfriend, whose body was found “stuffed in her closet” in Michigan last month.

It’s the reverse in Alabama, which has lost the plot, along with a stream of inmates. In 2014 it had the worst record in the U.S. for keeping track of the incarcerated. Of the 1,953 prisoners who escaped state-run facilities nationally in 2014, 734 had been under Alabama’s jurisdiction—that’s 38 percent of all escapees.

It’s a poor showing, but particularly dismal because a decade earlier, Alabama accounted for just 170 of the nation’s total escapes. In 2015, a report from the Associated Press found that 16 offenders who escaped from facilities in the state were still at large. A year earlier, three prisoners, two charged with murder, pulled off an elaborate escape when they pretended a cellmate was sick, then jumped a prison officer when he opened the cell door to investigate, stealing his keys and cellphone. The trio fled on foot, but were quickly captured by authorities.

Two big questions pop up. How could 1,953 people escape in 2014 and go unreported, and how did Michigan go from America’s most leaky to tight ship so quickly? The answers lie in accounting. As mentioned, some escapes are not really escapes at all.

“Escapes” are breakouts from secure facilities, the types with walls, fences, regular cells as seen in “Orange Is The New Black,” but the BJS reports its escape data bundled with AWOL figures.  AWOLs are really walk-aways from unsecured facilities, which can include halfway houses, prison and forestry camps, and farms. Think: “O Brother, Where Art Thou?” but without George Clooney’s heavenly singing voice. AWOLs can include people who violate terms of parole or ditch their ankle bracelets.

It’s difficult to say exactly how many so-called escapes are actually AWOL incidences, because not all states capture both sets of data, or report them separately. A full 21 of New York’s total 22 escapes in 2013 were classified as AWOLs, according to the National Archive of Criminal Justice Data. Colorado and Virginia, the only other states which reported the same data, had more escapes than AWOLs (eight escapes versus five AWOLs in Colorado, and seven versus four AWOLs in Virginia).

Michigan is a good example of why it’s important to clearly spell out where escapes end and AWOLs begin. As of Monday, there were 29 offenders on the Michigan Department of Corrections’ most wanted list. Just four of those were escapees from a correctional facility, and the most recent escapee had been missing since 1986. The rest—that’s 25 “most wanted” offenders—are listed as having “escaped” from a parole office.

Holly Kramer, a spokesperson for the Michigan Department of Corrections, said these offenders “likely cut their electronic tether, or they may have failed to return to a community corrections center or community residential program.”

Kramer gave Vocativ a variety of reasons for Michigan’s seemingly miraculous drop in escape numbers. “It has a lot to do with the way we used to classify escapes and the number of programs we used to have, including low security prison camps, work detail, correctional centers, community residential programs. Previously we had a number of offenders that would walk away … and those were considered escapes. That made the numbers really high.”

Aside from making existing facilities more secure, Kramer said Michigan Department of Corrections started shutting down low security prison camps in the early 2000s, and closed the remainder in 2009. “That brought numbers down. But we also closed our community corrections centers, and stopped having offenders who were prior to parole at community residential programs.”

As is the case in Michigan, most “prisoners” who escaped from institutions in Alabama in recent years were really just jumping probation or parole. Bob Horton, from the Alabama Department of Corrections, supplied us with data showing the number of offenders out on parole or on probation rose from 1,187 in 2006 to 3,783 in 2015. During the same time period, escapes and AWOLs rocketed from 161 in 2006 to that woeful 734 in 2014. Horton said Alabama’s community corrections program reports an escape when a person “fails to return to a disclosed place of residence and/or failure to report to CCP as required.”

What’s the takeaway here? A pretty surprising number of people still get out of prison—whether jumping over the wall or just slipping out of their anklet. But the real startling stat is the truly massive number of people we lock up to begin with.