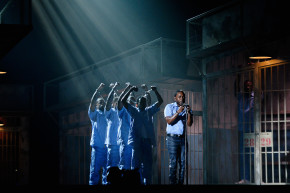 People Actually Filed FCC Complaints About Racism At The Grammys

Surprisingly, these gripes weren't about Taylor Swift winning "Album Of The Year"

The Grammy Awards are often a snoozefest where you see lackluster tributes and watch awards go to the wrong people. February’s event was no exception—save for Kendrick Lamar’s iconic performance of “The Blacker The Berry” and “Alright,” in which Lamar performed with his band locked behind bars in a statement about race and incarceration in America.

So, of course, people—most likely old, crotchety, and white—took offense. With that in mind, we filed a request with the FCC to see just what rankled viewers of the 58th annual Grammys.

More Kendrick Lamar And The Sad History Of Grammy Snubs

The FCC received four complaints from the event, and the first two are about what you’d expect. They found Kendrick’s performance offensive, and they are both located in North Carolina, which, if you have been following along, has been going through a bit of a cultural crisis.

A viewer in Apex, North Carolina complained of indecency. Grammatical errors have been left intact:

The Graphic, Violet and Racist nature of some of the performances were unbelievable to me and I find this type of unnecessary and dark references to the negative issues facing the black community in total denial to any positive solutions. This only encourages violence and anger directed towards law enforcement and will not do anything but perpetuate the anger and division that is growing as a result of this type of garbage. Does anyone realize that 8 Law Enforcement officers have been killed just since Beyonce’s Half Time performance of Formation at the Superbowl. What is the agenda of TV and Media in allowing this type of violent and anger to be pushed on all the youth of America. The negative and subliminal messages towards political agendas is blatant. There is no benefit to just do all you can to shock and tear down anything wholesome or positive over and over and over.

From Greenville, North Carolina, we have another indecency complaint about K dot’s so-called “hate video”:

I was totally horrified that Kendrick Lamar was allowed to perform such a hate video last night on the Grammy Awards Show. The song The Blacker the Berry did absolutely nothing but incite racism and down the men in uniform. I have watched the Grammy Awards every year and will NEVER watch them again. Please know there are still decent Americans who do not thrive on the trash we had to endure last night. This used to be a show that honored great artists and last night it was a platform the the black agenda. Shame on you.

The Grammy’s just lost at least one viewer in North Carolina. Okay then! Now for something different, another viewer from the fair city of Corolla, North Carolina had beef with the sound level of a particular commercial:

And in Amherst, Massachusetts, a very specific complaint about volume:

The Grammys are the second most-watched award show—and viewership this year ticked up slightly, though there was a drop off in the (coveted) young adult demo. So, whatever Kendrick did, it didn’t seem to make that huge a difference. Or perhaps, there’s no correlation at all, and next year, the Grammy’s should try a little harder to be more offensive.