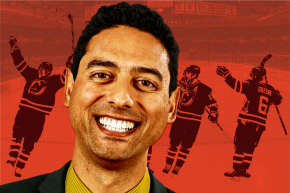 Meet The Most Interesting Man In Sports
By Joe Lemire

Meet The Most Interesting Man In Sports

Sunny Mehta is the guitar-playing, poker-winning, options-trading hockey analytics director of the Devils 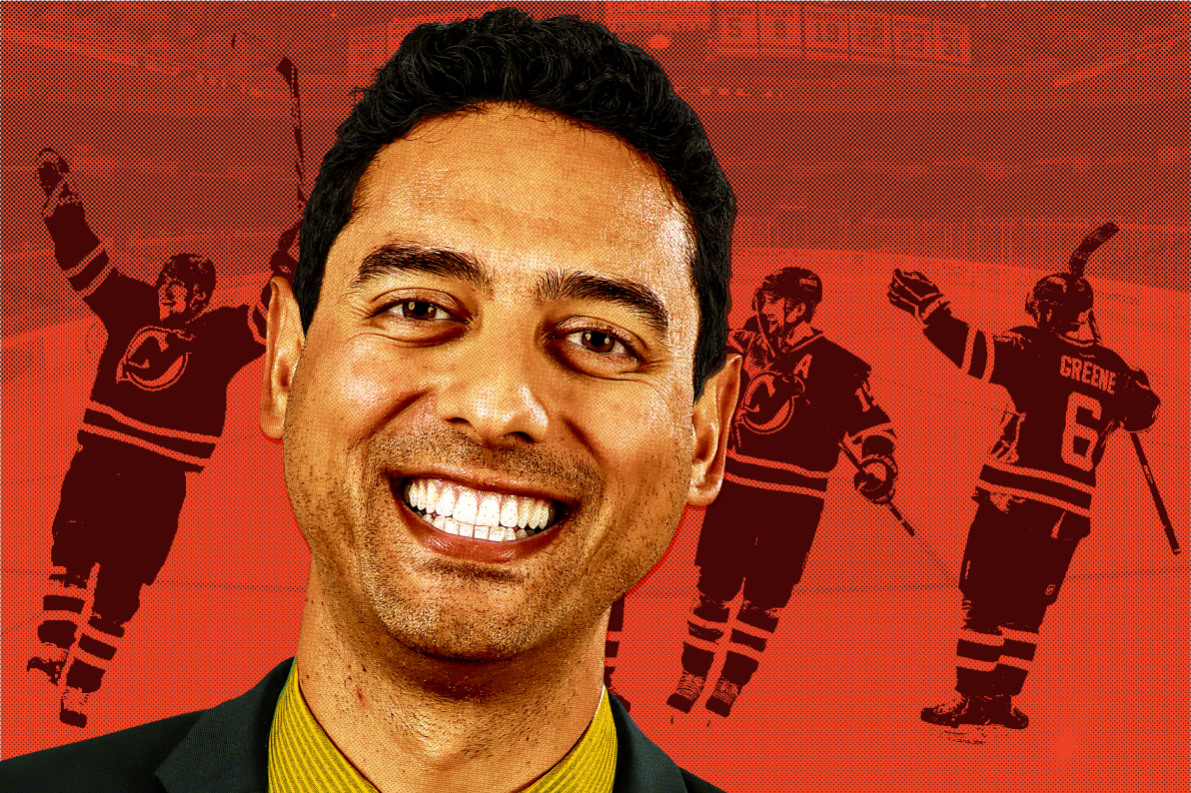 The most interesting man in sports played jazz guitar in New Orleans, wrote poker strategy books in Las Vegas, and was a profitable options trader in Chicago before he became a hockey analytics director in New Jersey.

Sunny Mehta, a lifelong Devils fan from Wyckoff, N.J., was hired by his childhood team two years ago. This is his fourth distinct career, a professional transience guided by his talent at the intersection of math and music. He turns 38 on Saturday.

“He’s incarnated himself again?” Lani Ramos, lead vocalist of Big Pearl & the Fugitives of Funk, said with a laugh. “How many lives has this man had already?”

Before this NHL season, many thought the Devils would be among the league’s worst teams. Instead, they’ll finish in the middle of pack, with significant credit being given to an adviser most of the players have never met, a man of varying traits: technically sound strumming of the gitbox, aggressive betting on the poker table, savvy investing in the financial world, and calculated value-finding in hockey.

Minnesota Wild minority owner Matt Hulsizer hired Mehta at his investment firm, Peak6, on the merits of Mehta’s statistically-minded hockey blogging and recognized a pattern among some of the players New Jersey signed last offseason, namely forwards Tyler Kennedy and Lee Stempniak and defensemen David Schlemko and John Moore. None are stars, and all were under-appreciated in the hockey marketplace.

“What they are is good value—players who do things other than what you see on NHL Tonight that help teams win games,” Hulsizer, who is Peak6’s CEO and a co-founder, said. “Sunny was able to capitalize on that. He’s still finding value in the league. Even as the league becomes much more aware of the value of analytics, Sunny remains at least a step ahead, if not two, of everybody out there.”

Mehta graduated with a music degree from the University of Miami in 2000 and moved to New Orleans two years later. Ramos met Mehta less than a week after he moved to the Big Easy and was struck with his cognizance of the interplay and responsibilities of the entire band.

“He could break down all the music, chart it out, and be able to explain every instrument to a member that came aboard after him, and he could do it on the fly,” Ramos said.

That proved critical one night on Bourbon Street. The venue Krazy Korner had reopened and was seeking a house band. On the day Ramos’ band was to try out, the original drummer bailed on the gig. They recruited a substitute on short notice.

“Sunny had to tell this drummer all the drum parts for each song for each set, and he did it,” she said. “We did the show, and we filled the house.”

Another early acquaintance was Joe Gelini, whom Mehta had met through a mutual friend prior to his move to New Orleans. Gelini was a friendly face and said the pair soon became “attached at the hip.”

“We just became totally simpatico,” he said. “We cracked each other up, and we still do.”

New Orleans life in one’s 20s, after all, was full of possibility. “It’s like a petri dish—so many different things that could wind up having legs with what happens at that age,” Gelini said.

Mehta bounced around the city’s diffuse music scene, playing gigs here and recording sessions there. Gelini, a drummer by trade, played a few shows with Mehta. They taught at a music school together and burned CDs for each other, with Mehta sharing a wide range—everything from experimental jazz to Rite of Spring (a century-old Russian ballet popular with jazz musicians) to, of course, Bruce Springsteen. (He’s a New Jersey native, don’t forget.)

Mehta gave Ramos a few guitar lessons. You can hazard a solid guess as to the impression Mehta made on Ramos.

“His playing was very articulate,” Ramos said. “It was structured, it was good, it was clean. It was almost like it was too good and too clean. It wasn’t dirty enough, that rock-edge dirty, for my stylings. Unfortunately, I made the mistake and let him go, and I should never have done that.”

Mehta’s love of sports was apparent to Geilini. Mehta would be swimming in oversized Devils hockey sweaters he’d wear out to bars and indulging his interest for stats via fantasy football. He prodded Gelini to join in—but urged him to research his decisions.

“You can only imagine what it was like trying to play fantasy football with him,” Gelini said. “He was probably doing very close to what he does now for a living. He was amazing at it. I was like, ‘Yeah, I don’t know if I really have the same level of interest in it as you do.’”

When the poker craze hit America a decade ago, Mehta began dabbling in the game in late 2003. He purchased a strategy book from an expert in Las Vegas, Ed Miller, and was playing professionally by 2004. He again encouraged Gelini to try, offering to lend books to him. Mehta even took a statistics class to get a better handle on the applicable mathematics.

“He’s a brilliant guy, I’ve known that from the beginning,” Gelini said. “With the way he approaches things—I’m a very emotional person—he’s a very assertive person. He would be able to talk about things that I would find difficult to not be emotional about. He could just sort of break it down, ‘Here are the facts, and this is really the only rational way that makes any sense to think about this argument.’”

Then Hurricane Katrina hit. The condo Mehta owned was spared, but he decided to relocate from the storm-torn city and moved to Las Vegas. Miller, the poker author, grew up in New Orleans and, upon recognizing an order from a familiar address, inscribed a note in Mehta’s book. They traded a few messages and connected when Mehta landed in Vegas.

Miller’s expertise at the time was in small-stakes Texas hold ‘em, but thanks to Chris Moneymaker and ESPN, no-limit hold ‘em became the game of choice. Miller said he learned a lot by watching Mehta.

“I had to learn the game, and I started out too timid, a little bit,” Miller said. “I didn’t realize it at the time. I saw Sunny play and was like, ‘Holy cow, you just throw money around. All right, I know what I’m doing wrong.’

Mehta’s background was unusual for a poker player. All the others, Miller said, are math nerds or hustlers. Mehta was a musician who rapidly became an expert on hockey and poker. He even learned computer programming along the way.

Jason Brown, a mathematics professor at Nova Scotia’s Dalhousie University, said he’s not too surprised by Mehta’s medley of interests. Brown is also a guitar player whose scholarly interests have included research into the role of math in the Beatles’ music.

“There’s a lot of pattern finding in both and appreciation for patterns and creative use of the patterns,” Brown said. “To me, people who do music really well are subconsciously doing a lot of mathematics.

“On the guitar, there are a lot of patterns. When you play the blues, you learn five blues scales on the guitar in different positions, then you mathematically translate them up and down the neck. Jazz works very much the same way. There are a lot more scales and substitutions that you have to move through very, very intellectually.”

Poker soon dominated for Mehta. He returned to New Orleans in 2006 to play professionally there while also working with Miller and a third, Matt Flynn, to co-write two poker books (one each on the small-stakes game and on no-limit). Music seemed to take a backseat for Mehta at the time—though he played guitar at Miller’s wedding—while his favorite sport was an ubiquitous presence on the television.

“All winter, he would just sit there watching hockey games,” Miller said, noting that the two played many hours of EA Sports’ hockey video games, too.

Around this time, Mehta began sharing his hockey insights and analysis online within a burgeoning community of writers—Eric Tulsky, Tim Barnes, Tyler Dellow, Mehta himself, and others—who interacted on blogs and over email. Their public posts caught the attention of the industry. Those four have all been hired by NHL teams.

One of the most interested readers was Hulsizer, the investing guru, who nearly bought the Arizona Coyotes in 2011 before later buying a share of the Wild.

“It was Moneyball for hockey,” Hulsizer said, “and Sunny was amongst that group of pioneers.”

Mehta wrote about the poor quality of the NHL’s official data, the skill of shot-blocking, the value of coaching and goaltending, and the toll of minutes played. Hulsizer saw a potential application to his business and hired him in 2011.

“It was a bet by us—his background was strong with the poker playing, the music, and the hockey analytics,” Hulsizer said. “He thinks about the world the way we do, so we thought he’d be a good cultural fit.”

After a few years, analytics spread like wildfire through the sport of hockey, and the Devils—whose owner and chairman, Joshua Harris, is a well-known proponent of sports analytics—came calling. Mehta has said he only would have left his investing job to work in hockey because it was the Devils, calling it a “dream job.” (The Devils declined an interview request for Mehta through a spokesman.)

After New Jersey hired coach John Hynes last summer, he said he spent a lot of time with Mehta to learn about the club’s proprietary information and practices.

“There’s a holistic part of coaching where you’ve got to understand analytics, statistics, off-ice training, nutrition—all those things are components of trying to get individual players better or get your team better to maximize their potential,” Hynes said. “It’s a component of our research that we do there. For me, I’m continuing to learn about it but be receptive in ways we think it can help us in-games or preparing for opponents or scouting or whatever might be.”

Of the handful of players asked about Mehta, however, none had met him.  Schlemko took particular note of Mehta’s poker expertise. “Not the guy you want to play against,” he said. He’s become more of a mythical figure around the locker room.

“I’ve never met him, but it’s kind of a running joke amongst the guys, especially Mike Cammalieri always asks if he needs to get him involved,” Devils defenseman John Moore said. “When he’s playing with guys, if you look him off on a play or you don’t get him the shot, he’ll always say, ‘Hey, should I go get [Mehta] involved?