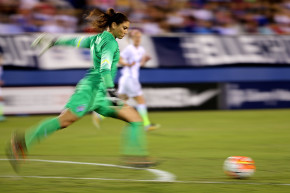 It turns out U.S. Soccer has been screwing over the USWNT on pay for years According to the filing, even though the women’s team created $20 million more in revenue than their male counterparts, they still earn only a quarter what the men make. That disparity is seen in everything from “bonuses, appearance fees, even per diems,” even though the USWNT “have identical work requirements, the same number of minimum friendlies, the same requirements about participating and making the World Cup teams — identical work,” Jeffrey Kessler, the attorney who also represents Tom Brady in the ongoing DeflateGate litigation, said.

“This is the strongest case of discrimination against women athletes in violation of law that I have ever seen.”

As the New York Times noted, today’s filing is the latest salvo in a “long-simmering feud between the women’s team and U.S. Soccer’s leadership” which “boiled over after last summer’s Women’s World Cup. A match in Hawaii that was part of the team’s so-called victory tour was canceled when the players refused to play on an artificial-turf field they deemed unsafe. U.S. Soccer’s president, Sunil Gulati, later apologized for the situation.”

“The reason the players have filed is because the USSF has made it clear that they will not consider equal pay [with the U.S. men] in the negotiations for a new agreement,” Kessler said. “So whether or not there’s an existing agreement, they won’t ever agree to make a change to give us the right salary. And the players have been very patient and have concluded now they have to bring a case.”

“I’ve been through numerous CBA negotiations, and honestly not much has changed,” Solo said in an appearance on the Today Show this morning,

“We believe now the time is right because we believe it’s a responsibility for women’s sports, specifically women’s soccer, to really do whatever it takes for equal pay and equal rights and to be treated with respect.”

A New York Daily News investigative report published on Wednesday detailed the myriad forms of discrimination the USWNT faces, including “systemic biases that devalue and obscure their contributions to the game. Many of these practices are questionable and untenable at best and, quite possibly, illegal.”

The disparity is even worse when it comes to the National Women’s Soccer League, where the average salary doesn’t come close to cracking the poverty line.

But even a cursory glance at the numbers show that Solo is dead right; the USWNT is getting financially screwed. For those claiming that the USWNT doesn’t bring in comparable amounts of money, over the last four years, the men’s team has generated $60.2 million compared to $51.2 million for the women, but the women have been topping their male brethren over the last two years.

To head off "But do the women bring in equal revenues?" bros: Yes. In FY2017 USWNT will pull in $8M more than USMNT: pic.twitter.com/Iof0ZCLCOb

So far, U.S. Soccer has only responded that while they “have not seen this complaint and can’t comment on the specifics of it, we are disappointed about this action. We have been a world leader in women’s soccer and are proud of the commitment we have made to building the women’s game in the United States over the past 30 years.”

Well, yes. “The women have without dispute vastly outperformed the men not just on the playing field but economically for the U.S.S.F. The women have generated all the money in comparison with the men,” Kessler said.

That’s not something US Soccer can plausibly dispute. The USWNT is the best in the world, destroying their competition on the path to winning the 2015 Women’s World Cup, bringing in a staggering 750 million viewers in total and 60 million world wide for the finals versus Japan. At close to 23 million in the US alone, it broke the record for the most-watched soccer match in US history.

The men’s team, however, has been stuck in the mud for years, slotted in at a paltry 30th in FIFA’s rankings, and needing to pull out a 4-0 win in a qualifying match against 95th-ranked Guatemala on Tuesday night in order to remain eligible for the 2016 World Cup.

“We are the best in the world,” Solo said in the statement. “[We] have three World Cup Championships, four Olympic Championships, and the USMNT get paid more to just show up, than we get paid to win major championships.”

“These women are very disappointed in U.S. soccer,” Kessler added on the Today Show. “When they asked for the same treatment as the men, they were told it was irrational. Now that might be a good answer in 1816. It’s not acceptable answer in 2016.”

Of course, even if it’s a terrible, no-good answer, it’s still a commonly held one when it comes to questions of sexist pay disparities in sports. On March 20, the ex-CEO of the BNP Paribas Open tennis tournament in Indian Wells, Raymond Moore, had some lovely thoughts when it comes to women’s tennis.

Indian Wells CEO Raymond Moore's remarks this morning not likely to delight the WTA, its players, or fans: pic.twitter.com/56zSV0SK2X

Moore resigned shortly thereafter. Perhaps the USWNT’s lawsuit will be able to drag US Soccer kicking and screaming into the 21st century.