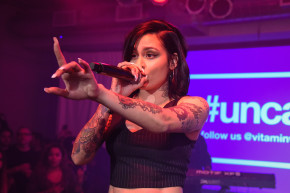 R&B singer Kehlani is recovering in the hospital after an attempted suicide. Apparently, it was speculation at the hands of internet trolls about the status of her relationship that drove her to this point.

The 20-year-old Bay Area native has been reportedly dating Kyrie Irving of the Cleveland Cavaliers. But on Monday, her ex-boyfriend, singer PARTYNEXTDOOR, posted a photo in bed holding hands with Kehlani, captioned “after all her shenanigans, still got the r&b singer back in my bed.” The internet took that and ran with it, interpreting it to mean that Kehlani had been unfaithful to her current beau, and ran wild with jokes and insults. The photo has since been deleted, but the damage had been done.

In a picture of her arm with an IV drip, Kehlani wrote:

today I wanted to leave this earth. Being completely selfish for once. Never thought I’d get to such a low point. But… Don’t believe the blogs you read.. No one was cheated on and I’m not a bad person… Everyone is hurt and everyone is in a place of misunderstanding.. But as of today, I had no single wish to see tomorrow.. But God saved me for a reason, and for that… I must be grateful.. Cuz I’m not in heaven right now… On that note… Bye Instagram.

When it comes to trolls and commenters, the a disconnect between online and real life results in people viciously weighing in on the private lives of just about anyone with a public account. In Kehlani’s case, a matter in which internet commenters were running purely on assumption, it’s an extreme example of how ugly that mob mentality can get once it starts to snowball.

But the ways you can report that kind of abuse are limited on social media platforms. On Instagram, there’s an option to report the user in hopes that maybe Instagram might suspend their account. For celebrities and public figures, that would mean reporting thousands of snide comments–or blocking those users entirely–which isn’t a practical solution, like in Kehlani’s case, when the abuse was so rough, she resorted to self-harm. All of this—from allegations of infidelity to a suicide attempt after a public blowup—was documented on Instagram, the very medium that gave Kehlani’s tormenters a platform in the first place.

And if you or someone you know is having suicidal thoughts, please get seek help. The National Suicide Prevention Lifeline is open 24/7 and can be reached by phone at 1-800-273-8255 or online here.