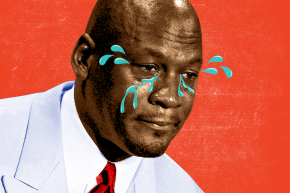 In Defense Of Crying Jordan And All Memes Everywhere 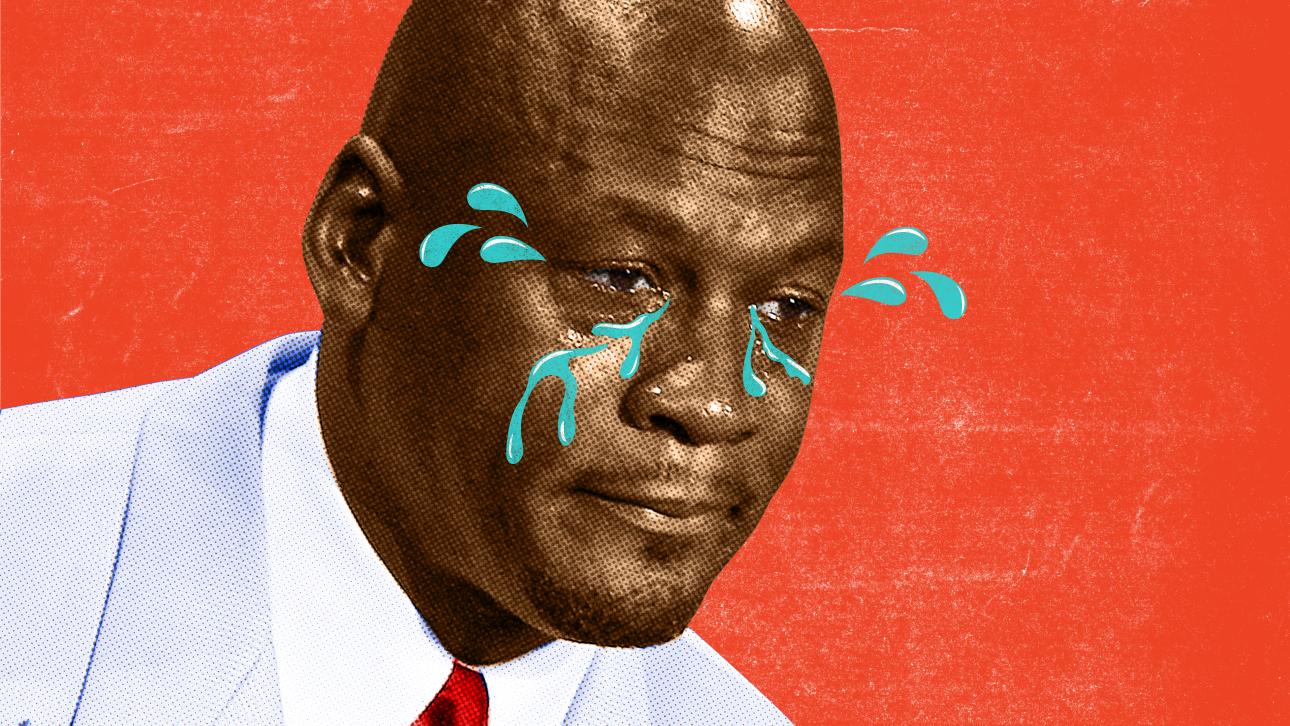 It is the storm crouched just beyond the horizon. At the conclusion of any contest in which an individual or group will be declared the loser, you know what’s coming next: the Crying Michael Jordan Meme.

Jordan’s puffy-eyed, tear-strewn, anguish-filled head will be plastered on to the body of the loser, transforming your previously heterogenous social media soup into a single, unifying howl. And it’s a beautiful thing.

For the uninitiated, it all began way back in 2009 with Michael Jordan’s Basketball Hall of Fame speech. He received a standing ovation and started to tear up, clutching the podium through an alternately emotional and defiant speech. For an athlete with a reputation as a borderline sociopathic competitor, seeing his face transformed into a moist, soggy mask of human frailty was notable in and of itself.

As for the provenance of the meme itself, the site KnowYourMeme notes that at the conclusion of the 2012 NBA season—in which Jordan’s Charlotte Bobcats finished with a dismal 7-59 record—“an image macro titled ‘Sad Michael Jordan’ was submitted to MemeCrunch featuring a still image of Jordan crying with the caption ‘Why / Did I buy the Bobcats?’”

Crying Jordan remained relatively unknown for the next three years, but there was a massive spike in use in 2015, coinciding with a cluster “of high-profile post-season sporting events at professional and collegiate levels in the United States,” including “the MLB World Series in November, NCAA Football Championship in January, NFL Super Bowl in February, NCAA Basketball Championship in March,” Brad Kim, editor of KnowYourMeme, said via email.

“After such an intense period of incubation and rapid growth in circulation volume, it is not uncommon for memes, especially ones that are primarily used as reaction images, to grow beyond its initial user base and context and become adopted into online vernacular at large.”

In the life cycle of an ubiquitous meme, what comes next is fairly predictable, according to Kim: a backlash.

“The media’s resentment towards a meme that skyrockets in popularity and usage over a short period time is actually very common,” he wrote. “In fact, such backlash is a reliable indicator of its uber-popularity.”

To wit, Matt Bonesteel of the Washington Post wants to see the Crying Jordan meme eradicated from existence. And while he does admit that, “it was funny at first, sometime last year when it began in earnest. But then everyone started using it. And then, sometime around Cam Newton’s deflation at the Super Bowl, the joke wasn’t funny anymore by virtue of sheer volume.”

ESPN’s Britt McHenry agreed and, well, you can likely guess what she got in return.

Am I the only one who doesn't think the crying MJ face is funny?

But Bonesteel and McHenry’s critiques go well beyond a simple question of comedic taste. Bonesteel argues that, by definition, “Twitter sends readers flocking toward unoriginality and groupthink,” and that the locust-like plague of Crying Jordan memes is an example of Twitter “at its worst.”

That’s where he’s dead wrong. Arguing that Crying Jordan is “not funny” is missing the point altogether. Yes, ideally, a well-timed and -crafted Crying Jordan can and will coax a smirk or a giggle, but the meme in and of itself is the language of the Internet.

As Karl Hodge wrote in 2000, memes proliferate because they “are copied from one person to the next, planting fundamental beliefs and values that gain more authority with each new host. Memes are the very building blocks of culture.”

And as social media becomes the terrain in which more and more of our conversations about sports take place, it’s inevitable that that dialogue will be expressed via memes. That is not to say that we’ve completely eliminated face-to-face sports gabbing, but this is the direction in which we’re heading.

Hating Crying Jordan, or wishing any one particular meme were gone, feels more like resenting this change, rather than antipathy towards Crying Jordan itself. It’s an older generation unwilling or unable to adapt and remain versant in a growing, constantly morphing language that feels alien to them.

More to the point, what Bonesteel and others are failing to grasp is that the core of the Crying Jordan meme isn’t mockery or a stultifying submission of one’s creative, individualized thoughts to a shrieking online mob.

Yes, a deluge of of blubbering Jordans can be exhausting, an infestation of skittering cockroaches wrecking your finely curated timeline that can’t be stopped or hushed away no matter how quick on the draw you are with the mute button. But again, this is “fundamental to the way that memes work. While people are completely free to create almost any form of content, in practice most of them choose to work within the borders of existing meme genres,” Limor Shifman, a senior lecturer at the Hebrew University of Jerusalem said in an online interview.

“This ostensive rigidity may in fact have an important social function: following shared pathways for meme production is vital for creating a sense of communality in a fragmented world.”

Further, as Chris Chesher, a Professor in Digital Cultures at the University of Sydney theorized, “a Internet meme’s agency in society is a manifestation of an iteration of Roland Barthes‘ concept of the punctum … an image (or moving image) that wounds or punctures the viewer, exposes the common experiences and situations people face in life – thus experiencing the meme reveals something that individuals already have but are unable to articulate.”

And what are they trying to express? As Kim said, “in terms of potency, versatility and endurance, what makes Crying Michael Jordan even more exceptional … is the sheer power of the visual metaphor behind an image of someone like Michael Jordan, who is considered the great of all time in history of the sport, breaking into tears in defeat (or at least that’s how it is contextualized).

“It translates to the defeat of the undefeatable, the superlative.”

Which, yes. What has elevated Crying Jordan above hundreds if not thousands of other reaction memes is its ability to convey the enormity of human responses to a binary event like a game or an election. Crying Jordan contains multitudes: a means of celebration for the victors, a playful, trolling stab at the recently vanquished, the summation of the days and hours, or even years spent giving away precious emotional capital to a thing, a team, a player, a political movement, only to fall short yet again.

How do you even begin to express all of that? Sure, you could run screaming into the night, shedding clothes and caution to the wind, screaming at deities and slightly disconcerted neighbors about the unknowable unfairness and injustice of the universe, but sharing a nifty Crying Jordan seems like a far better option.

More importantly, it’s a vector for connection, even if that connection is as tenuous as a few faves or a bunch of retweets, as Shifman said. Crying Jordan reminds us that, even in the isolating solitude of a humming blue screen, we are not alone.

But what may be freaking some people goes beyond a grumping hostility against these durned kids and their interwebs. It’s a realization that memes, like any new permutation of language that is literally alive and spreads virally, can be dangerous.

“They’re very easy to misuse. That’s why they’re dangerous. And it’s just about a full-time job trying to prevent people who are scared of these ideas from caricaturing them and then running off to one dire purpose or another. So we have to keep plugging away, trying to correct the misapprehensions so that only the benign and useful variants of our ideas continue to spread.”

If it’s any comfort to the Bonesteel’s of the world, according to Kim, “in the grand scheme of the memescape and their life cycles, this one will eventually peak and wane.”

What might sustain it though, is Jordan himself trying to crush it, giving it a Streisand Effect-like second life. When asked if he’s aware that his weepy mug has become the avatar for the agony of defeat, a spokesperson told the Chicago Tribune that he “has taken notice of the viral trend” and is more or less fine with it, as long as no one’s making a buck or two.

“We haven’t seen anyone using it to promote their commercial interests, which is something that we’re monitoring.”

Which proves, if nothing else, that Michael Jordan—like anyone else calling for the death of a meme—doesn’t understand memes.