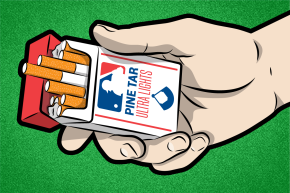 How Major League Baseball Got Addicted To Tobacco
By Jack Moore

How Major League Baseball Got Addicted To Tobacco 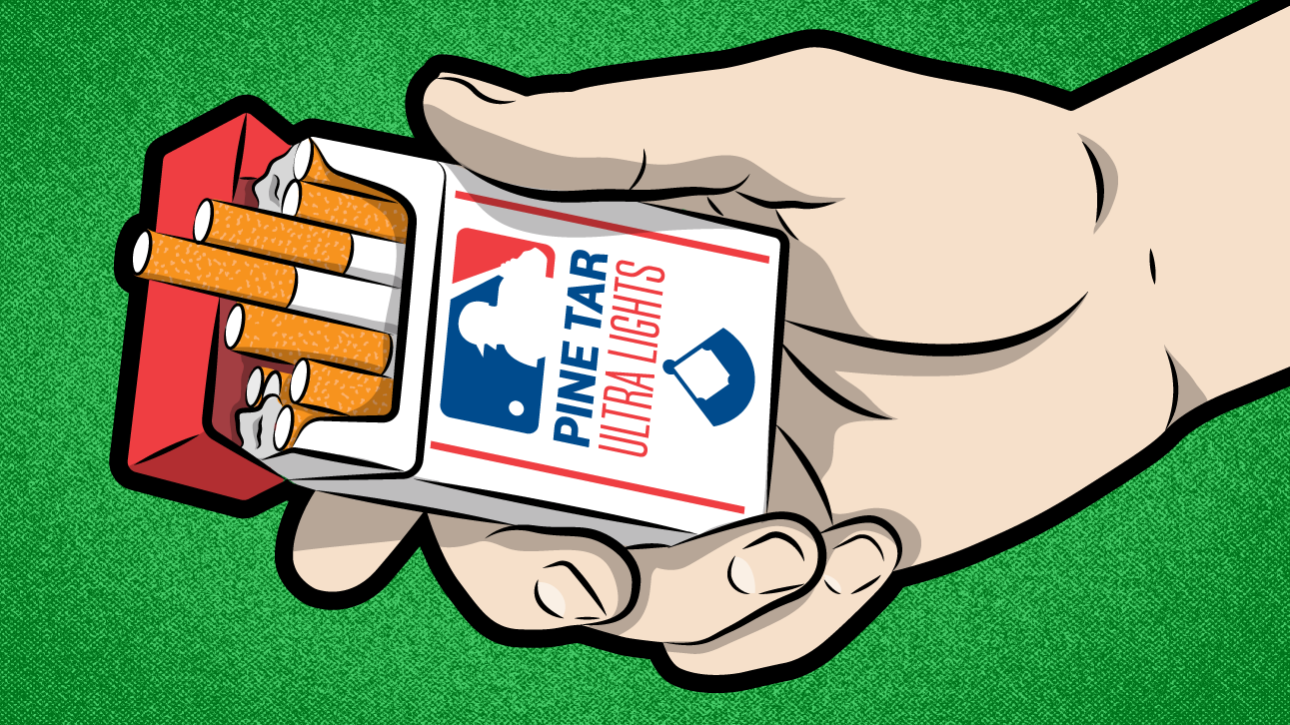 This Tuesday, the New York City Council passed a law banning all forms of tobacco from ticketed sporting events. The legislation is clearly targeting professional baseball players and their favored smokeless tobacco, adding New York a a list of cities enacting such bans, along with San Francisco, Boston, and Los Angeles.

These laws are the result of lobbying by the Campaign for Tobacco Free Kids, which has targeted baseball in particular because of its cushy historical relationship with big tobacco. Throughout the game’s history, arguably no other institution has facilitated tobacco use like the sport.

There is no better illustration of this phenomenon than Babe Comes Home, the 1927 silent film featuring Babe Ruth in his acting debut. Ruth plays an exaggerated version of his mythical self, Babe Dugan, a baseball superstar who chews tobacco and engages in other generally slovenly behavior.

Babe falls for the woman who launders his uniform, Vernie, but when she convinces him to give up his chewing habit, he falls into a horrendous slump, a slump that threatens their budding relationship. The slump gets so bad that it forces him to the bench until, before a critical at-bat, Vernie relents and tosses him a plug of chew, and in response Babe promptly delivers the heroic home run. Tobacco saves the day.

Babe Comes Home pretty well represents the relationship between baseball and tobacco throughout history. During the game’s early days in the 19th century, chewing tobacco was popular among players, but its use diminished after the discovery that all the spitting was a vector for transmission of tuberculosis.

Still, advertisements for tobacco in its many forms were standard around baseball throughout its history, as tobacco advertisements appeared in the Sporting News as early as 1891 and Bull Durham tobacco images were emblazoned on the outfield walls of parks in the early 1900s.

More Yetis, UFOs And The Still-Unvolved Death Of 9 Russian Hikers

“It was just so prevalent,” said the late Joe Garagiola, who played from 1946-1954 before beginning a Hall of Fame announcing career. Garagiola tirelessly campaigned against smokeless tobacco with The National Spit Tobacco Education Program. “I chewed when I played. I didn’t know why. I thought it was part of being a ballplayer. Now I’m convinced guys chew, first of all, out of peer pressure; second, out of boredom; and third, to give off a macho image.”

By the 1950s, cigarettes replaced chew for many players, especially the stars who posed as models for cigarette advertisements.

“When I first broke into the big leagues, 30-40 percent of the Mets smoked, and only three of the remaining players on the 25-man roster chewed,” said Nolan Ryan, who began his 27-year major league career in 1966. “No one dipped. Chewing peaked in the 1970s, and dipping took over. The switch began with free samples of dip coming into the clubhouse.”

At that time, tobacco companies were engaged in a large-scale marketing effort to brand chewing tobacco as a harmless alternative to cigarettes.

“We have an oral cancer epidemic on our hands,” Garagiola recalled telling Little League leader Creighton Hale, “It’s hidden. It’s silent. Nobody’s doing anything because smoking is getting all the publicity. Secondhand smoke and stop smoking here and no smoking on planes. And the tobacco companies are laughing. They’re going to make their money by exporting their cigarettes, and what they will do is target the young people. You see it, the rodeos, the good-old-boys circuit with the Skoal-branded car, the country-western concerts and the rock concerts. And they give these free samples on college breaks. You can see they’re targeting the young people with this stuff.”

Beyond all the free advertising baseball gave chewing tobacco through cheeks stuffed with dip on the field, on television sets, and on baseball cards, many players starred in advertisements for the product, most with the same general tone as Babe Comes Home. Here’s baseball hall of famer Carlton Fisk hamming it up for Copenhagen in 1978.

By 1987, half of major leaguers had a history of smokeless tobacco use, and 34 percent were current users, according to a survey consisting of responses from 282 players. Chewing tobacco companies also targeted college players for free samples, and a 1985 survey of the NCAA ranks found that 40 percent of players were using smokeless tobacco regularly.

Only 3 percent of college players smoked, which starkly proves the effectiveness of the campaign to target young people with smokeless tobacco and differentiate it from the dangers of smoking cigarettes.

The free samples lasted until 1998, when Major League Baseball finally banned the practice. One American League executive told MLB.com it made a major difference. “You wouldn’t believe how cheap some of these guys are. Believe me, it has cut down the amount of dipping and chewing around here […] Baseball did a smart thing there, because not only are some of these guys cheap, but they’re also pretty spoiled and lazy.”

In 1993, Major League Baseball instituted a ban on smokeless tobacco in minor league baseball, with fines ranging from $100 to $1,000. MLB can only get away with this policy because the minor leagues lack union representation.

A 10-year study examining the Pirates every year at spring training saw tobacco use decline from 41 percent to 25 percent over the course of the study. The measure seems to be working, as dubious as it may be from a labor standpoint.

But the cultural impact of Major League Baseball’s multifaceted support of smokeless tobacco remains. Adult smokeless tobacco use has remained relatively static from 1986 on, with about 7 percent of men partaking according to the CDC.

Of course, this was the plan the whole time. Tobacco companies targeted athletes because they know how strong peer pressure is within the team dynamic, and how badly athletes want to impress their peers and their leaders.

By fostering smokeless tobacco use as a habit in the major league and in colleges, tobacco companies — and the baseball teams that allowed it — created generations of tobacco users. Hopefully, banning its use in major league parks will help prevent this culture from being passed down to future generations. But for those who grew up watching and loving the game for the past half-century, the damage is already done.