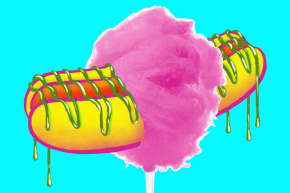 A Journey Through The Most Disgusting Baseball Ballpark Food

We compiled the most horrific examples of gross baseball food. Probably because we hate ourselves 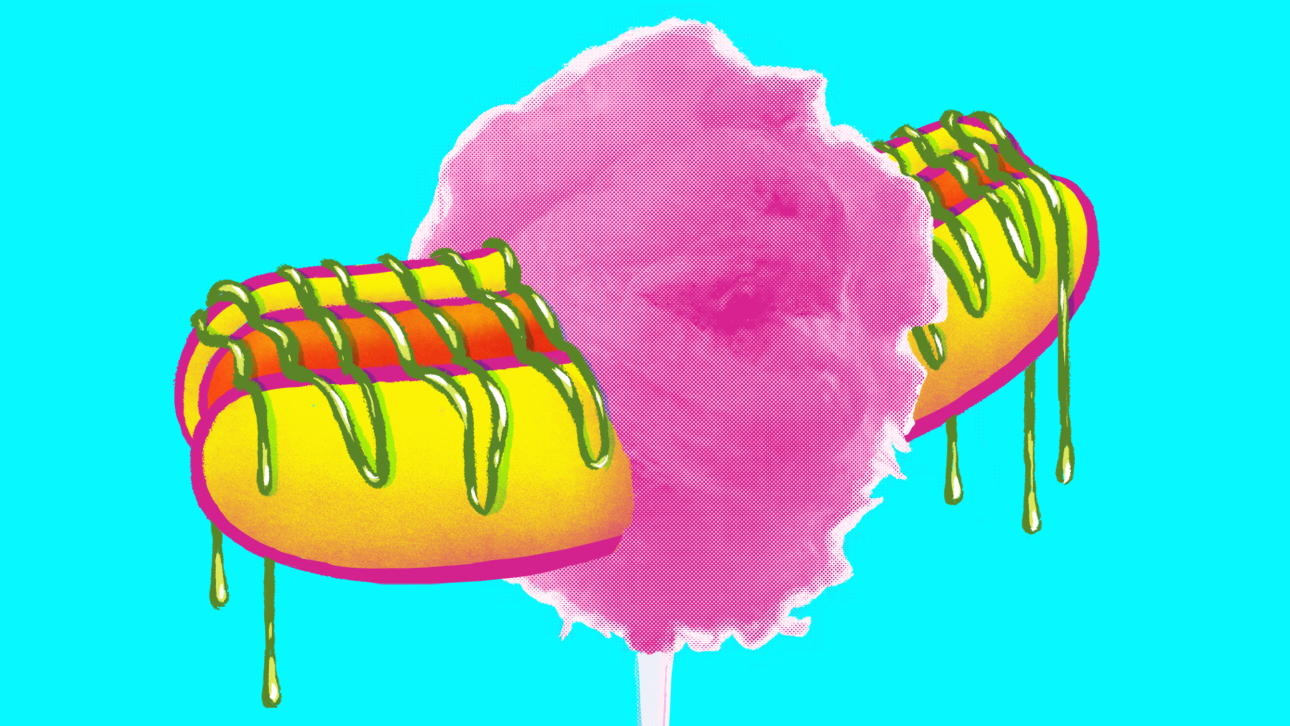 Once upon a time, baseball teams realized that someone might enjoy chomping on something a tad tastier than the standard soggy Fenway Frank and gluey Cracker Jacks at the ballpark, and that the presence of real food might be a perk of attending a game. However, that became a tad passé ever since some hotshot food executive chain-watched a few too many episodes of Man vs. Food and voila: capital-w Wacky concessions became the hot new trend.

Thankfully, the long, national nightmare that is spring training baseball is coming to a merciful end. But before the actual games begin on Sunday night, first comes a string of debuts of what can only be described as trash food: a slow, steady blast of flatulent, gut-busting, adipose-laden, Tim Burton-like creations available for purchase—if not actual consumption—at the ol’ ball yard this season.

Leading off is the Atlanta Braves, who unveiled what they’re calling the “Burgerizza” last week. This towering monstrosity of fat-saturated beef, cheese, and starch is exactly what you think it might be: a 20-ounce bacon cheeseburger jammed between two personal-size pizzas—one pepperoni, one plain—in lieu of buns. It’s unclear what the total calorie count might be when all is said and done, but a bit of back-of-the-greased-soaked-napkin math suggests that it probably lands at a hair under 3,000 calories and enough sodium that a small municipality could plausibly substitute a Burgerizza for their local salt lick.

Now, is anyone going to eat all this, let alone buy it, given that the prices veer far closer to “reasonably priced entrée at an actual restaurant?”

Cost on the true pizza burger selling at @Braves games will be $26 pic.twitter.com/fPcWDdfT3d

Face it: You’re going to get hectored into saying yes, either by a small, bored child or a bro elbowing you in the ribs, daring you to fork over your money and grimly trudge back to your seat, carrying a giant, shining symbol of America’s rampant obesity and addiction to curious consumption.

Since the Braves have gone full Moneyball, ditching every well-paid in his prime talent on the roster in exchange for restocking their barren farm system, stunt food is as good a trick as any to entice a sucker to pay to watch this team.

In addition to the aforementioned burger-slash-pizza affront to all that is holy and good, the Braves are rolling with this:

Say hello to T.E.D. (The Everything Dog). Part of your new @Braves dining experience. pic.twitter.com/psggppPi4s

Of course, the new Braves menu for the clinically unwell comes via Delaware North Sportservice, famous for crafting gastronomic mutants that wouldn’t look out of place alongside a Jeff Koons exhibit. During last year’s playoffs they unleashed these rough beasts for Texas Rangers’ fans. And if anyone actually ate them, they were quickly sent slouching toward the bathroom.

For example, the Elvis Jabberdog is a “2-foot-long brownie rolled in a Rice Krispy crust and dipped in funnel-cake batter. It is then fried golden brown and topped with whipped cream.”

The Elvis Jabberdog Brownie (apparently the very first one). My pancreas is dying just looking at it @Rangers pic.twitter.com/j7qgXCRwSw

Can’t make up your mind between savory, sweet, and projectile vomiting? Why not try the Sweet Spot Cotton Candy Dog, “an all-beef hot dog with cotton candy-infused mustard … topped with just enough cotton candy to make it both sweet and salty.” (Infusing mustard with cotton candy apparently turns it the color of nuclear waste.)

If you’d rather jam your entire head into a family size-sack of orange dust, there’s the One-Pound Top-N-Go Cheetos, “a one-pound bag of Cheetos opened on its side and loaded with your choice of chili, taco meat, shredded chicken or brisket then topped with nacho cheese.”

If you missed out last October, I’m sorry to inform you that it’s unclear if the Jabberdog will be back for this year’s playoffs, assuming the Rangers get that far. Luckily, as Casey Rapp, general manager for Delaware North Sportservice at Globe Life Park in Arlington, Texas told the Dallas News, “Our goal this year was, let’s go wacky, let’s go crazy.”

Uh-huh. Let’s consider what that looks like in practice real quick.

There’s the Wicked Pig, wherein a tri-level “Hawaiian roll is stacked with pulled pork, bacon, sausage, prosciutto and ham, then doused in barbecue sauce and topped with coleslaw and pork rinds.”

Or the Chicken and Doughnut Skewer, a foot of alternating fried chicken and doughnuts “drizzled with buffalo honey sauce.”

Vocativ reached out to Delaware North to ask if they would provide the nutritional information for this “food.”

“We don’t do a calorie count but we do offer healthy options at the ballpark,” a spokesperson said via email. “In fact it’s expanded this year, after our GM worked with a vegan fan in creating a very delicious and healthy option menu.  The cart is called the Ballpark Vegan.  I’ve attached a photo of the food.”

Here it is. The attached jpg was titled, “Vegan Group Pic.”

Vegan? Healthy? P’shaw! Let’s get back to that good, good stuff: architecturally-unsound plates of comestibles that’d make Rabelais blush. The Pittsburgh Pirates are offering the Cracker Jack and Mac Dog, a foot-long hot dog with what appears to be an entire box of Cracker Jacks, a fistful of mac and cheese, plus jalapeños, and salted caramel sauce served on naan bread (for some unknown reason).

The Philadelphia Phillies will turn your entire digestive system to mush with the Wayback Triple Triple Triple, a teetering stack of nine cheeseburgers that clocks in at 1,980 calories—though some have estimated it’s actually 2,200—including a whopping 55 grams of saturated fat and 125 artery-clogging grams of fat in total.

The world champion Kansas City Royals are going all fancy with the Champions Alley Burger, “a cheese-stuffed, tempura-battered cheddar bacon burger with sweet slaw, chipotle ketchup and fried pickle on a Farm to Market roll for $19.”

If minor league ball is more your thing, the West Michigan Whitecaps are still serving the Fifth Third Burger, a gargantuan mound consisting of a cup of chili, five one-third pound beef patties, and five slices of American cheese with heaping piles of salsa, nacho cheese, Fritos, lettuce, tomato, and sour cream. It tilts the scales at 4,889 calories and weighs four pounds. Four pounds. And yes, it was an actual Man vs. Food challenge.

Let’s end here, because I never want to eat anything ever again. If we ever needed a better sign that something has gone terribly, horribly wrong with our grand experiment in democracy, even more so than Donald Trump himself, all of this non-food is as good an example as you’ll find of Patricia Lockwood’s truism in the New Republic: “America has always been willing to dare, and double-dog dare, and triple-dog dare itself. America has always offered to drink anything for five dollars, no matter how disgusting.”