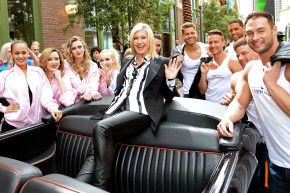 10 years after his mysterious disappearance and presumed death, a tabloid claims Patrick McDermott is now alive and well with a new girlfriend

In June of 2005, Patrick McDermott—boyfriend of Olivia Newton-John—went on a fishing trip off the coast of San Pedro, California and never returned. The U.S. Coast Guard spent years searching for him only to conclude in November 2008 that he probably drowned. But according to the Australian tabloid Women’s Day, McDermott is reportedly alive and well in Mexico, living with a new girlfriend.

From the beginning, there were always doubts about McDermott’s disappearance that made the whole thing seem a little shady. Not only did he owe his ex-wife Yvette Nipar $8,000 in unpaid child support, he also had additional debts of around $30,000, and disappeared shortly after filing for bankruptcy. Dateline also says it was a full seven weeks before Newton-John spoke publicly on the case, issuing a statement about her “trusted friend.” Oh, and no one actually saw McDermott fall off the boat.

In the years since the incident, there have been two private investigations into the disappearance of McDermott. One investigator, John Nazarian, told Woman’s Day that it was “rumored” that McDermott was somewhere in Mexico traveling with a German national. But a second investigator, Philip Klein, says that McDermott is now living in the Mexican fishing village of Sayulita, working for a high-profile family in the yachting industry. Either way, these private investigators have gathered a pair of curious details. McDermott secured a second passport just before he flew the coop, and also withdrew his life savings from a pair of bank accounts before he left.

Klein, who wrote a book about his search, told the Daily Mail that just after starting the investigation, he heard from someone in McDermott’s camp that Patrick was fine and good and just “wishes to be left alone.” Klein, who went to Mexico to check things out firsthand, found that McDermott “hadn’t faked anything. He just wanted to get away from the drama.”

Olivia Newton-John has yet to comment on the news about McDermott’s whereabouts, but has since moved on, marrying John Easterling in 2008.