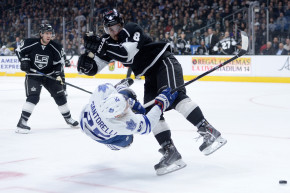 The NHL Commissioner Is Wrong About The Dangers Of Hockey 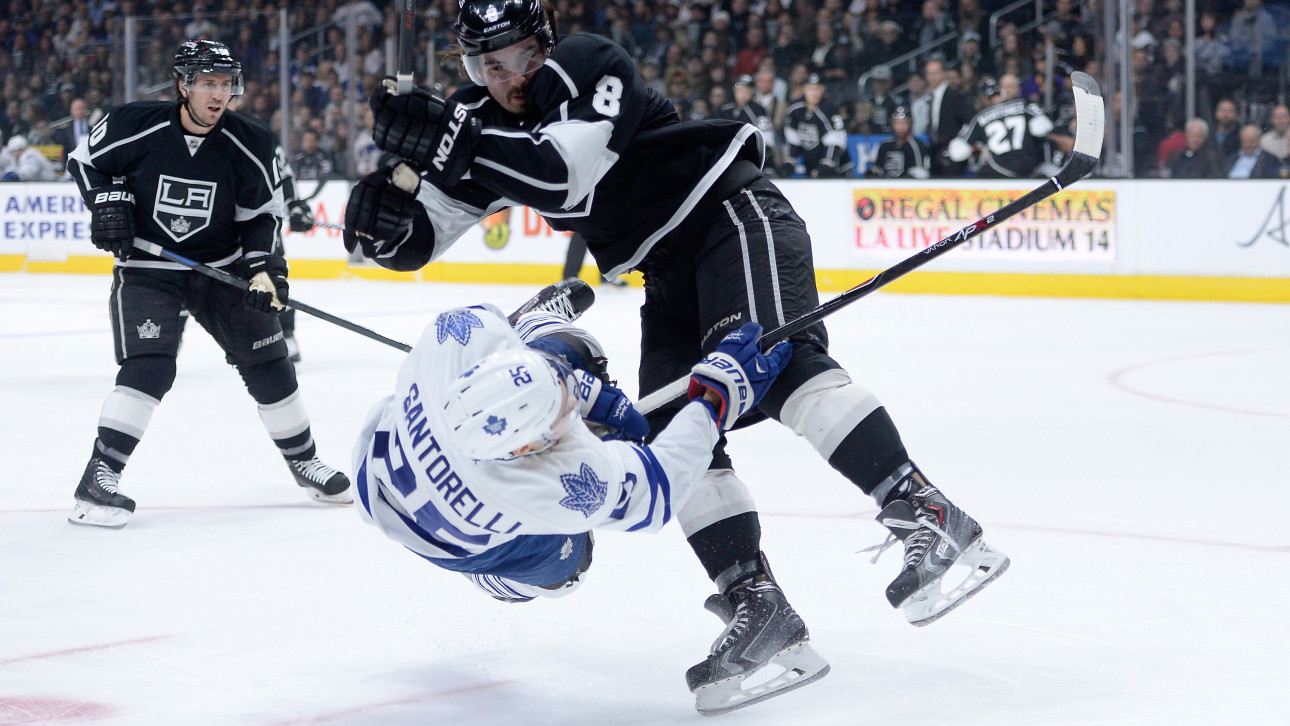 The ramifications of NFL executive Jeff Miller’s admission to a causal link between football and the brain disease CTE extend beyond the world of football.

NHL commissioner Gary Bettman quickly distanced his league from Miller’s comments. “Well, first of all, I don’t feel that it’s either necessary or appropriate for me to comment on what the NFL either says or does,” Bettman told reporters at the NHL’s annual general managers meeting. “Secondly, I think it’s fairly clear that playing hockey isn’t the same as playing football.”

Bettman’s attempt to spin this story is weak, as the historical record clearly reveals hockey’s past with head trauma is similarly shameful, filled with career-ending injuries and league officials seemingly determined to do everything in their power to deflect any culpability.

Brain injury has been an inescapable reality in hockey from its early days. In Game One of the 1950 Stanley Cup Semifinals, Detroit Red Wings star winger Gordie Howe took a hard hit to the head on a play in front of the Detroit goal. The Red Wings coach said he saw a Toronto Maple Leafs player strike Howe with the butt of his stick, a claim denied by the Leafs players. The collision left Howe with “a fractured nose, fractured cheekbone and a brain concussion.”

That night, Howe was forced to undergo an emergency 90-minute operation to remove fluid from his head.

Stories of horrific head injuries in hockey games at all levels can be found throughout the game’s history. In 1968, Bill Masterston of the Minnesota North Stars died at 29 years old after suffering brain injuries in a fall on the ice. In 1969, Ted Green of the Boston Bruins took a stick to the head and was forced to undergo a similar emergency surgery to Howe. The same happened in 1983, when Ed Kea of the minor league Salt Lake Golden Eagles suffered head injuries in a collision with a Tulsa player.

When Bernie Geoffrion instituted a mandatory helmet rule for his AHL Quebec Aces in 1965, they became the first fully-helmeted hockey team in over 30 years. Geoffrion made the decision following a pair of nasty head injures to Aces players, including one who suffered a skull fracture.

“I never had a bad injury myself,” Geoffrion told reporters, “but I remember what happened to Lou Fontinato,” who had his career ended by a horrific neck injury in 1963. “At first the fans were surprised when they saw us coming out on the ice with the helmets,” Geoffrion said, “but so far most of the comments have been very favorable.”

Still, hockey’s masculine culture eschewed helmets for years and across all level of the sport. One mother wrote in to an advice column to ask for help with her 11-year-old son, who refused to wear a helmet when asked and opted to quit hockey rather than endure criticism from his peers.

Of course, these kids were merely emulating their professional heroes. Charlie Patterson, a pioneer in the hockey helmet industry, faced resistance from players when he first tried to introduce his product in the early 1960s.

“Professional players believed (and the majority still do) in what may be termed the myth of the superskull,” Patterson said  according to a 1971 United Press International story.

“This is certainly no sport for sissies,” 22-year-old Bruins defenseman Bobby Orr said in 1971, “I’d feel unnatural in a helmet, and besides, it would restrict me too much.”

Brad Park of the New York Rangers agreed: “It takes a lot of guts to play in the National Hockey League, and if you don’t have it, you shouldn’t try to compete.”

Alan Eagleson, director of the NHL’s players association, advocated for helmets following Masterston’s death, leading the Journal of the American Medical Association to publish an opinion that all NHL players should wear head protection. Eagleson pushed for a helmet mandate because he knew most NHL players would opt to go bare to look more “rugged.”

“If a compulsory rule were put into effect, nobody would be at a disadvantage,” Eagleson said, “and the overwhelming majority of players will accept it without too much objection.” It took eight years, until 1979, before the NHL instituted a mandatory helmet rule. Even then, players toiling in hockey’s  minor leagues who were not compelled to wear protective headgear continued to go without helmets—the aforementioned Kea, who needed emergency surgery, was one of them.

But as in football, helmets have not provided a panacea for the head injury problem. While plastic helmets do a good job of preventing ugly skull fractures, hockey players still take numerous blows to the head.

Research has shown it is not necessarily the massive blunt force trauma of the scariest concussions that causes CTE, but rather the disease arises as a result of repetitive head trauma, even at a subconcussive level. The journal Neurosurgical Focus published a study specifically noting possible radiological evidence of brain trauma resulting from subconcussive blows in hockey back in 2012.

The NHL has been aware of its concussion issue since at least 1997, when it established a joint concussion program with the NHL Players Association. The late 1990s saw a number of hockey concussion headlines, chief among them a lawsuit filed by former junior hockey player Jared Hope against his club, the Spokane Chiefs, alleging the team allowed him to resume playing too soon after a concussion, resulting in a hit that ended his career (the suit was eventually settled out of court for an undisclosed sum).

The next year, a study by William O. Roberts of MinnHealth Sports Care found that 15 percent of the total injuries incurred during a Minnesota high school tournament play were concussions, leading Roberts to call for body checking to be banned at the high school level.

The NHL’s concussion program, however, did not produce any research until 2011. When the NHL was hit with a class action concussion lawsuit, the league claimed players ought to have been able to “put two and two together” through stories in the media about brain injuries, a claim the players’ lawyers rightly blasted as absurd.

“By representing that the NHL was the caretaker of player safety and was responsible for researching concussions… the NHL was telling players not to look for or believe what the NHL now says the players should have researched and understood.” The lawyers effectively summed up the concussion program as a “whitewash.”

Numerous players have accused the NHL of burying its brain trauma issue in the same way the NFL worked to hide and deflect its knowledge of health risks and responsibility to care for its workers.

“Due to the League’s callous attitude toward head hits and concussions, my NHL days were cut short,” former player Malcolm Davis wrote in a National Post (Canada) editorial. “My story is not rare. Expendable players like myself would get called up to play a few games in the NHl, only to suffer a hit to the head and be replaced. We never saw a doctor for these injuries, and I rarely knew someone to be formally diagnosed with a concussion. I certainly wasn’t.”

Brad Maxwell, a playmaking defenseman who spent the bulk of his career with the Minnesota North Stars, echoed those sentiments in the Minneapolis Star Tribune, where he wrote, “The NHL condones and promotes brutality in a way like no other sport. Only the NHL allows—even encourages—players to fight each other and put their health and safety on the line… The league never told its players that we were at risk for long-term brain damage and diseases, despite mounting medical evidence suggesting otherwise. Even today the NHL refuses to admit that concussions cause long-term neurological harm.”

Former player Steve Montador’s lawyers repeated this assertion in his lawsuit against the league: “The NHL’s insistence upon preserving and promoting violence in spite of the obvious dangers caused, or contributed to cause, Steven R. Montador’s brain damage, addiction and depression.”

The NHL has a culture that incentivizes players to play through pain and hide injuries, particularly invisible injuries like concussions. The NHL encouraged fighting and sold the game through the violence of its enforcers, a role filled by many of the aforementioned players. Now, after reaping the labor of those players, the NHL is trying to distance itself from any responsibility from the damage the game caused.

In that respect, despite what Bettman says, hockey and football couldn’t be more alike.