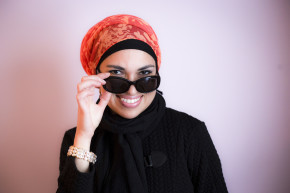 The attacks are hitting as Muslim fashion becomes more visible

Somoene has been hacking the Instagram pages of Muslim fashion bloggers, erasing their photos and replacing them with threats and, occasionally, pictures of Donald Trump.

Australian journalist Jennie Khalik tweeted that two bloggers and a fashion label called Hijab House had been the targets.

The Instagram accounts of major Muslim fashion brands have been hacked. Trump videos are being posted. Hijab House: pic.twitter.com/6JMSiU5YWB

Australian brand Hijab House are being threatened, and so are two Muslim fashion bloggers that go by @NabiilaBee and @mariammoufid

The hackers have been deleting photos, threatening to close accts. HH are receiving threats and police are involved pic.twitter.com/UTq78mjepR

The bloggers, Nabiilabee and Mariam Moufid, are dealing with the attack. Nabiilabee has had to open a new Instagram account, under the moniker TheHijabee, after she was hacked another time and her photos were removed. Moufid’s two accounts, Mariammoufid and HijabMuslim seem to be back up and running.

The Hijab House account is no longer active. It was taken over by a hacker with the username blurryxans, who made it private and deleted all the photos. Although it appears the account may have been removed right now, because when you click that link you get an error message.

This string of hacks come at a time when there is wider visibility of Muslim fashion. In January, Dolce & Gabbana announced a new line of high-end hijabs. Last fall, H&M debuted a new campaign that prominently features a model Mariah Idrissi, who wears a hijab. The hackers’ identities haven’t been revealed, but the police are reportedly involved, and it looks as though the hacks have been reported to Instagram.