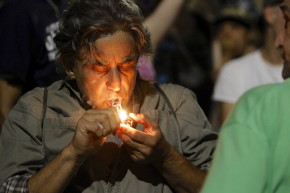 Will 2016 Be Weed’s Tipping Point?
By Tracy Moore

Culturally and politically, marijuana is at peak acceptance, but federal legislation could solidify all that 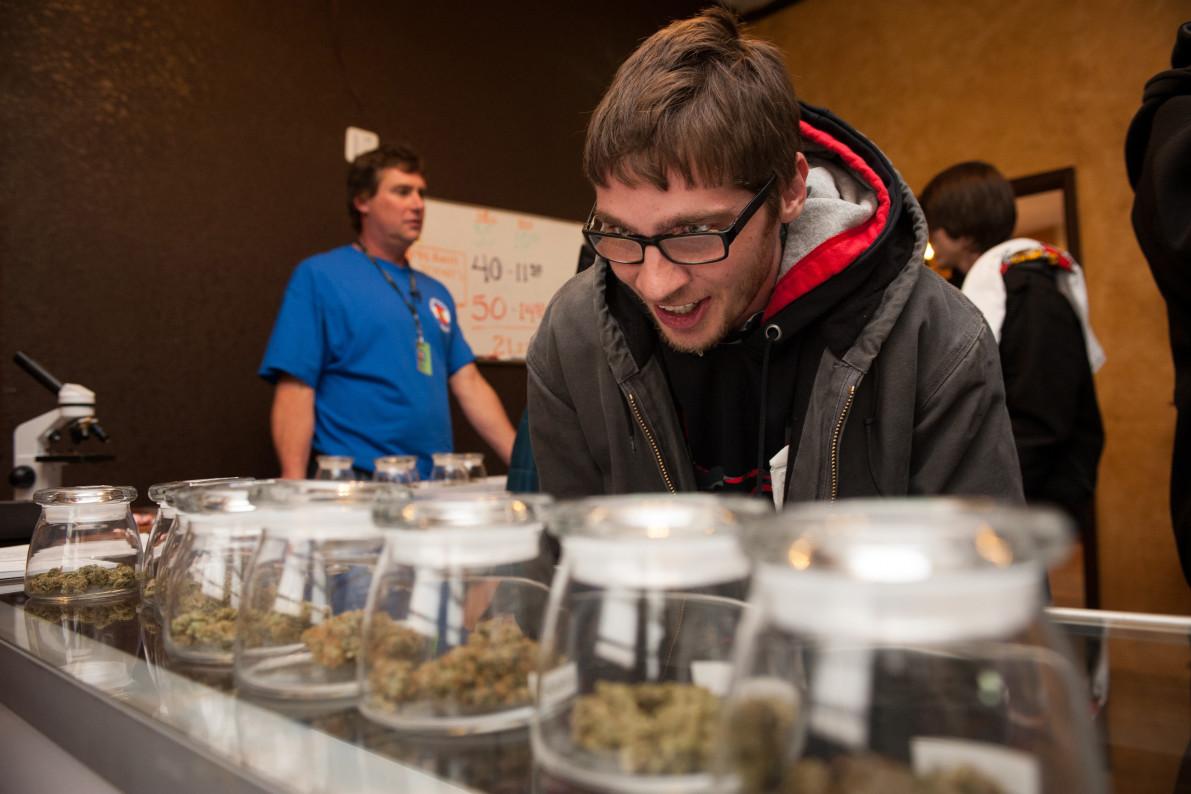 Weed is entering into its boom years. The drug is now legal for medicinal use in 23 states plus Washington, D.C., and legal for recreational use in four (Colorado, Washington, Alaska, Oregon) and D.C. Fourteen states allow use of cannabis oils, and a handful of states are poised to vote on measures that would legalize them. Americans spent some $5.4 billion on legal purchases of marijuana in 2015 alone.

Yet, there’s still a federal ban on the substance, and a historic federal bill removing the drug from the controlled substance list is hung up in committee, causing a number of tangles for dispensaries, sellers, patients, and users.

The last few years have seen a shift in public opinion on the drug as it slowly becomes de-stigmatized as more people advocate for its use medicinally or admit to partaking recreationally, or both. In the food world, it can be consumed legally in varying buzz-inducing quantities in coffee pods, ice cream, vitamin chewables, and now vodka. Whoopi Goldberg and The Game are even launching their own product lines, offering edibles for menstrual cramps and weed-infused lemonade, respectively.

Stoner athletes are an open secret, and occasionally, one will cop to it, like track star Usain Bolt. San Francisco recently hosted a “Cannabis Olympics” whose mission was to “show that cannabis users are NOT lazy, unmotivated or ‘stoners’ and to de-stigmatize the millions who use cannabis in a healthy and responsible lifestyle.” There’s even a niche weed news station called z420.tv, calling itself “the CNBC of cannabis.”

Meanwhile, reports surface daily of the many medicinal uses of marijuana, and the struggles many citizens face to obtain it legally. The Utah mother who gives her severely disabled 3-year-old suffering from a thyroid disease two drops of cannabis oil a day and lives in fear of being prosecuted. (Mormons are among the leading advocates for legalization in Utah.) A Pittsburgh mother fighting to give marijuana pills to her 15-year-old son, who suffers from constant seizures, waiting on an amendment to work its way through the system. Or 91-year-old grandmother Aurora Leveroni, a.k.a., “Nonna Marijuana,” who makes YouTube videos detailing the Italian, cannabis-infused recipes she whips up to help her daughter, who suffers from epileptic seizures.

It’s worth noting that there is currently little reliable scientific evidence that marijuana is safe or effective for any medical condition—but that’s largely because federal laws that classify marijuana like it was heroin keep researchers from being able to get the drug to study. (Fortunately, there are signs that too is changing.)

A 2015 poll found that voters cared slightly less about past pot-smoking in their political candidates than former financial troubles. Pew Research that same year found that public opinion on the subject of legalization is “rapidly outpacing opposition”—nearly half of those polled say they’ve tried pot, and about the same number, some 53 percent, favor legalization, compared with 12 percent in 1969. The majority of that support comes from blacks and non-Hispanic whites equally, while only 40 percent of Hispanics support legalization. Generationally, nearly three quarters of Millennials want legalization. A recent Gallup poll found that 58 percent of Americans favor legalizing cannabis.

“It seems as if the stigma is starting to disappear, and a majority of Americans want to see marijuana treated similarly to alcohol,” says Morgan Fox of the Marijuana Policy Project, a state and federal lobbying group, by email. “I think it is fair to say that once people start realizing that marijuana is objectively safer than alcohol, it becomes difficult to judge responsible users too critically or to justify the treatment of non-violent marijuana consumers under prohibition.

Pew Research found that 7 in 10 people believe marijuana is safer than alcohol. And yet, the federal ban persists, resulting in problems for dispensaries, too, who often can’t open bank accounts, forcing them to operate entirely in cash. That is the case in Colorado, where marijuana is expected to turn a $1 billion profit this year, split between sales for recreation and medicinal use, and that’s not counting paraphernalia and tourism proceeds. Washington state expects to pull in $1 billion from weed sales over the next four years.

Such windfalls have encouraged other states like Vermont to consider legalization in spite of the federal snags. The RAND Corporation issued a report guiding Vermont or other interested states along 12 ways to regulate the supply, urging that it should not be seen as a “a binary choice between prohibition and the for-profit commercial model we see in Colorado and Washington,” but rather as an opportunity offering a wide range of possible regimes.

Cannabis investor group ArcView told the Post that based on their research into new marijuana sales, legal sales are expected to grow by 30 percent over the next five years as more states legalize, calling the legalization of cannabis “one of greatest business opportunities of our time, and it’s still early enough to see huge growth.”

An in-depth Washington Post look at the many possible solutions the RAND report lays out found that states could approach regulation in any number of ways, maintaining prohibition and reducing penalties, or simply making it the lowest law enforcement priority, as in San Francisco and Seattle. Alternately, states can follow the commercial model that mimics alcohol taxation and regulation, as is the case in Colorado and Washington.

Beau Kilmer, project leader and co-director of RAND’s Drug Policy Research Center, told the Post that it’s a “false dichotomy” for states to assume they can only pick one of two options. “Jurisdictions considering alternatives to prohibition could limit supply to home production, cooperatives, nonprofit organizations, socially responsible businesses, a public authority or even a state monopoly,” he said.

RAND estimated that Vermont had 40 times the number of users within a 200 mile-radius of the Vermont border as it did inside the state, presenting a huge opportunity to boost tourism by legalization. If it did legalize, Vermont would be the first state to do so by legislation rather than vote, using the proceeds from the 25 percent sales tax to fund drug law enforcement and drug education, Reuters reports.

There are currently ballot initiatives up for November vote to follow the alcohol-style model in Colorado and Washington in Arizona, Massachusetts, Nevada, and Maine. In California, the first state to legalize medical use of pot, voters will decide in the fall whether or not to permit recreational use.

As states grapple with the potential benefits and risks of going legal, at the federal level, attitudes are at peak political relaxation without fully embracing a federal ban lift. A bipartisan bill, CARERS, short for The Compassionate Access, Research Expansion, and Respect States (CARERS) Act, introduced in 2015 from Senators Cory Booker, Rand Paul and Kirstin Gillibrand, would effectively end federal prosecution for sales in states where the drug is legal. It would reclassify the drug as a schedule II drug with legitimate medical use and recognize states rights to regulate it as such. It would also expand research and permit banking for dispensaries. It’s currently stalled in the Judiciary Committee, where advocates fear it will be killed by Republican committee chair Chuck Grassley.

Matt Gray, the CEO of the marijuana news site The Stoner’s Cookbook says it’s still the wild west in many ways for the industry, but he “thinks it’s a big year” for growth. “There are some really innovative products out there, and a lot of smart people are getting into the space,” he said. “Pretty much anything you can possibly build around cannabis is happening—tourism, edibles, concentrates, delivery services, dispensaries. A lot of businesses and players in the industry are still trying to find their footing as regulations change and things unfold. A lot of powerful people have a vested interested in [not legalizing], whether it’s pharmaceuticals, police unions, or the prison guards union. A lot of us are looking at where things are going to be in five years.”

But the barriers still remain due to the federal ban, which prevents the aforementioned access to banks, fear of prosecution from those in need of medicinal aid, but also means sellers “can’t take advantage of the tax breaks other industries enjoy. The threat of raids by overzealous drug cops is ever-present, despite congressional efforts to curtail these actions.”

President Obama, who admitted his own past use and said in 2014 that pot “was not more dangerous than alcohol,” said in a recent interview with VICE News that “You’re starting to see not just liberal Democrats, but also some very conservative Republicans recognize [prohibition] doesn’t make sense, including sort of the libertarian wing of the Republican Party,” Obama said.

“They see the money and how costly it is to incarcerate,” he added. “So, we may actually be able to make some progress on the decriminalization side.”

That’s promising, but in January of this year, Obama reportedly said that marijuana reform was not on his 2016 agenda, according to the Washington Post. Representative Steve Cohen (D-Tenn.) asked Obama at a Democratic retreat in Baltimore whether he wanted to reschedule the drug, and Obama said such reform is “not on his list of end-of-term priorities,” saying he needs it to come through Congress. But ultimately, that will be easier said than done.

“Members of Congress tend to be between five to 10 years behind the public on this issue,” Dan Riffle, the former director of federal policies for the Marijuana Policy Project, told NPR last year about the bill.

“Medical marijuana is more popular in this country than baseball and apple pie, and it’s certainly more popular than Congress. What this bill means, and what it shows, is Congress is finally catching up to the public on this issue and recognizes that this is a slam dunk.”