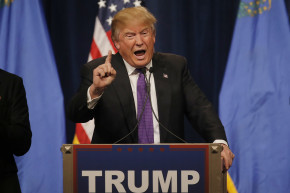 Breitbart reporter Michelle Fields and editor-at-large Ben Shapiro are both resigning in the wake of Fields’ accusations–and subsequent court filing–that Donald Trump’s campaign manager Corey Lewandowski assaulted her at a Trump press conference. Citing a lack of support from their employer, Fields and Shapiro’s resignations are effective immediately.

Since the claims first surfaced, the Trump camp has attempted to discredit Fields, with Lewandowski calling her “delusional” and Trump saying she “made the story up.” Breitbart, a far right wing site that is very cozy with Trump’s people, has offered tepid support for one of its own, only asking for Lewandowski’s apology and even calling into question Fields’ claims to begin with.

I can't stand with an organization that won't stand by me: https://t.co/pohxCKScpf

Fields said in a statement to BuzzFeed:

Today I informed the management at Breitbart News of my immediate resignation. I do not believe Breitbart News has adequately stood by me during the events of the past week and because of that I believe it is now best for us to part ways.

Breitbart issued a statement in support of Fields, but accounts of what happened internally tell a different story. One staffer wrote a post calling Fields’ credibility into question, saying she might have misidentified Lewandowski. Internal chats from Breitbart staff show that top brass silenced staffers who wanted to show support for Fields. In his own resignation statement, Shapiro said he couldn’t abide by this:

Both Lewandowski and Trump maligned Michelle in the most repulsive fashion. Meanwhile, Breitbart News not only stood by and did nothing outside of tepidly asking for an apology, they then attempted to abandon Michelle by silencing staff from tweeting or talking about the issue. Finally, in the ultimate indignity, they undermined Michelle completely by running a poorly-evidenced conspiracy theory as their lead story in which Michelle and Terris had somehow misidentified Lewandowski.

Fields and Shapiro’s resignations follow that of Breitbart spokesperson Kurt Bardella, who announced his departure last week, and Politico also says more resignations are coming today. But seemingly discontent with just being a circus of chaos, the story has taken an even weirder turn. This morning, Breitbart published–and then deleted–a post mocking Ben Shapiro for his resignation. The story was published under the faux-byline of Shapiro’s father, an occasional contributor to the site who was outed as a result. A cached version can be read here. Breitbart said the post was published in jest.

Vocativ has been monitoring social media around the controversy, and has found that Shapiro has already been the target of a couple hundred anti-semitic tweets.

Meanwhile, the Trump camp has remained unapologetic about the whole situation, insistent that Fields made the whole thing up. Last week, Lewandowski has called Fields an “attention seeker,” which has become the party line in the Trump camp. As as vile as these counterclaims are, it is believable for a campaign that has refused to take any responsibility for increasing violence at its rallies, and has even encouraged it.

At a rally in Cedar Rapids, Iowa on Feburary 1st, Trump said, “If you see somebody getting ready to throw a tomato, knock the crap out of ’em, would you? Seriously. Okay? Just knock the hell — I promise you, I will pay for the legal fees. I promise. I promise.” A number of Trump supporters have been assaulted at Trump events, too. Just yesterday, on Meet The Press, Trump said he “doesn’t condone violence.” But he isn’t exactly doing anything to stop it.

But since this is the shockingly bulletproof Donald Trump we’re talking about, this incident has had no ill effect on his campaign…so far.