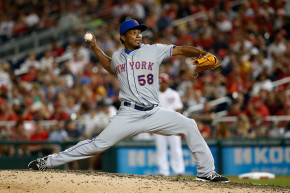 The law offices of White, Ricotta & Marks are down the hall of the fourth floor in a nondescript concrete building, situated alongside an elevated subway line, sharing a block with several auto-repair shops.

The distance from its legal opponent, Major League Baseball, cannot be overstated. MLB occupies choice upper-level floors of steel-and-glass 245 Park Avenue in Manhattan, a regal address compared to a hyphenated only-in-Queens special of 31-10 37th Avenue, of which a fellow tenant is a realty company with a broken website and 1.5 stars on Yelp. Indeed, the chasm extends beyond the zip, area, and property-tax codes that separate ritzy Midtown Manhattan from industrial Long Island City.

In a cramped, plain-walled conference room, former New York Mets reliever Jenrry Mejia—currently serving a permanent ban for three failed performance-enhancing drugs tests—and his lawyer, Vincent White, alleged that Major League Baseball had used third-party contractors to hack into player social media accounts for information; had demanded Mejia divulge incriminating information about another player with a penalty of a future false positive; and had threatened his potential reinstatement into the sport if he appealed his third failed test.

White’s lawyerly summation of his opening statement was to say that the league “cannot run America’s pastime like a bad ‘70s cop movie.”

“After his second test, Mr. Mejia was told by a league representative that, if he did not provide testimony on a particular player they wanted to investigate, they would go out of their way to find him positive a third time and he would never play baseball again,” White said.

When asked if the case against Mejia felt like a witch hunt, White responded, “I certainly do. This is dirty cop tactics. You can’t pressure someone and say ‘We’ll take away your livelihood if you don’t give me the people I want.’ And, frankly, he didn’t even have that information.”

Mejia himself spoke in Spanish, and his interpreter conveyed his comments thusly: “He says he is not here to accuse or to hurt anyone. He is here to clear his name and speak the truth.”

“Sadly, the comments made by Mr. Mejia and his representatives today continue a pattern of athletes hiring aggressive lawyers and making wild, unsupported allegations about the conduct of others in an effort to clear their names. Mr. Mejia’s record demonstrates that he was a repeated user of banned performance-enhancing substances. As such, per our collectively bargained rules, he has no place as an active player in the game today.”

Calls to the Major League Baseball Players Association and Mejia’s agent, Peter Greenberg, were not immediately returned. MLBPA executive director Tony Clark told reporters over the weekend, “Those concerns weren’t anything we were aware of during the course of this process.” (Greenberg has not commented and was not present for the press conference.)

Mejia, 26, was the Mets closer in 2014 and saved 28 games with more than a strikeout per inning but, after two drug suspensions in 2015 that would have kept him sidelined for the first 99 games of the 2016 season, Mets leadership was not relying on him to be a big factor this year. If he contributed late in the season, it would have been a bonus, but the front office made alternate plans.

It’s all moot now. Mejia did not utilize his collectively-bargained right to appeal his third positive test—all three of which have been for the anabolic steroids stanozolol and/or boldenone—but White believes the new witness testimony claiming the league offered cash for information and that it broke into personal web accounts might allow for an expedited assessment of his case. As it stands now, the CBA allows Mejia to apply for reinstatement in one year with a possible return to the sport in two years.

“We believe the new information we have uncovered allows us to reopen the matter,” White said, “and we’re working with the union to that end now.”

Yankees star Alex Rodriguez, who served a full-year drug suspension in 2014, made similar allegations about league improprieties, at one point releasing a statement referring to MLB’s “corrupt investigative program.” That charge never resulted in anything, however.

The challenges made by Mejia’s camp, first in the New York Times and later at this press conference, have been at times confusing or convoluted. One reporter’s question on Friday, for instance, was repeated three times without a clear answer as to what alleged threat was made when.

Another reporter felt compelled to ask Mejia’s lawyer: “Have you read the joint drug agreement?”

“Yes, we have,” White replied.

Reporter: “What I’m struggling with is, why wasn’t this presented in the appeal? Why is this happening now?”

Lawyer: “There was no appeal for this test. There was a deal worked out by which my client did not file an appeal on this most recent test.”

Reporter: “And what did he get in return for that?”

Wild claims, anonymous witnesses, and a bullying business entity make for a compelling story—if only it ends up being true.